Here’s a recap of all the major tech news stories from the week gone by. Catch up on the latest 4G data plan from Vodafone or the launch of the dual display Meizu Pro 7. Meet the unscratchable Moto Z2 Force or glance upon the Xiaomi Mi 5x. 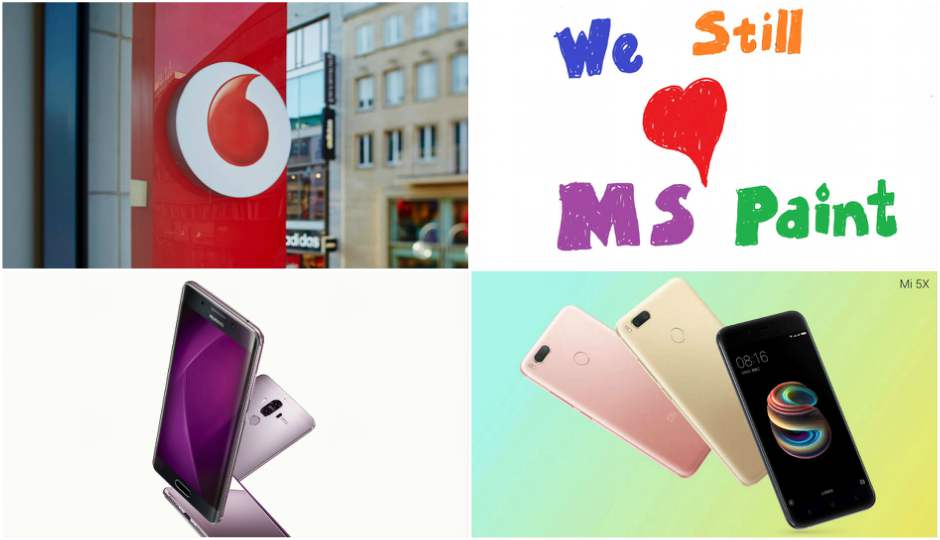 Boy! Was this a long week. We had a bunch of smartphone launches (seriously, how many phones does the world need?) and some noteworthy developments in the tech world. The Apple iPhone 8 is still tipped to be delayed and Micromax’s manufacturer is ditching the Indian smartphone-maker to launch its own phones. As you can see, a lot happened over this week, but worry not Netizens! We have it all wrapped up right here for you.

Yeah, Vodafone has finally woken up and realised it needs to stop overcharging users for data. The Red plan promotions have ended for now, but the telecom provider now wants to charge customers Rs 244 for 70GB of 4G data for a period of 70 days. Problem is, the scheme is applicable for new prepaid customers. Thanks for nothing Vodafone! Those looking to join Vodafone shouldn’t be too delighted because they will only get access to 1GB 4G data per day. Common Jio users! It’s time to flaunt your Rs 309 plans right now.

Wow! How can someone trust state-run services if this is what happens to them. Seriously BSNL, it’s time for a thorough security check! The malware was reportedly spreading to modems belonging to BSNL broadband customers, changing their login information, prohibiting them from accessing the internet. And we live in 2017! Thankfully, the damage was contained after around 2000 modems with ‘admin’ as the user name got affected by the malware.

Huawei wants to take on the Apple iPhone 8

And it may just do that! Did you know Huawei is now the largest smartphone seller in China? This seems to have given the company enough confidence to take on tech mammoth Apple, and their upcoming iPhone 8. The Huawei Mate 10 is getting a bezel-less display and Richard Yu, the Chief of Huawei's Consumer Division confirmed that the smartphone will debut later this with technology to compete against Apple's next iPhone. Best of luck Huawei!

Xiaomi’s mid-ranger is here and it brought with it the Android Nougat based MIUI 9. Xiaomi has packed the phone with a dual-rear camera showing some great innovation (that’s sarcasm guys! Read between the lines). The Mi 5x looks like any other phone, but we’re sure Xiaomi thinks it’s special. The smartphone will cost somewhere around Rs 15,000 if and when it comes to India, and it may just be yet another hit for the Chinese company. Why? Because we love to NOT be able to buy a Xiaomi phone in a flash sale! It’s just so exciting ;-)

But it doesn’t. Why? Because it does not have the infrastructure to handle such a high number of subscribers. On the other hand, its sworn enemy Airtel can provide 5 times more 4G data speeds. All this information is based on an OpenSignal report, which also crowned Airtel as the fastest 4G network in India, based on average peak speeds.

We will be different, thought Meizu and then they launched a smartphone with dual displays. Yes, the Meizu Pro 7 and Pro 7 Plus come with an OLED display at the back of the device, which can be used to, you guessed it, click selfies! Go ahead Meizu, encourage self-obsession. Joke apart (are they jokes though?) the secondary display can be used to view notifications and control the music player as well. Of course how could they do without dual cameras? So the Meizu Pro 7, Pro 7 Plus sport a dual 12MP rear camera setup. If you want more info on the devices, spend some time reading this quick news story.

Microsoft Paint died and came back from its ashes

Early in the week, folks were seriously overdoing it with the MS Paint nostalgia. How many of you were even using it in this day and age (except for those of you who still live under a rock)? Anyhow, MS Paint is not going anywhere and the software will get a new home in the Windows Store as a free application.

Comio to bring dual-camera phones under Rs 10K to India

They ditched Micromax and will not make any phones for the Indian brand anymore. Why? Because they saw green in the Indian smartphone, budget to mid-segment, market, and are now going to launch phones under their own brand. Comio smartphones aim to get an under Rs 10,000 device with dual-rear cameras to you on August 18. Rejoice!

Let’s revisit an important smartphone launch from last week. Why? Because we can!

Have the urge to scratch this phone? Well, you can’t! The Moto Z2 Force was finally unveiled by Lenovo owned Motorola. The event was held in the big apple and the Moto Z2 Force now becomes the second generation Moto device to sport the shattershield technology, making it scratch resistant. No points for guessing the processor - Snapdragon 835. Sad news is that the Moto Z2 Force might never make it to India, because even the previous Moto Z Force did not. PS: Moto also launched some cool mods with this one, including a $300 360 camera mod. Seriously, one can buy a phone in that much money!