Describing Cook's letter as 'important', Pichai tweeted stating that the Government's need to hack into a user's phone could be a "troubling precedent" for the metanarrative of user security. 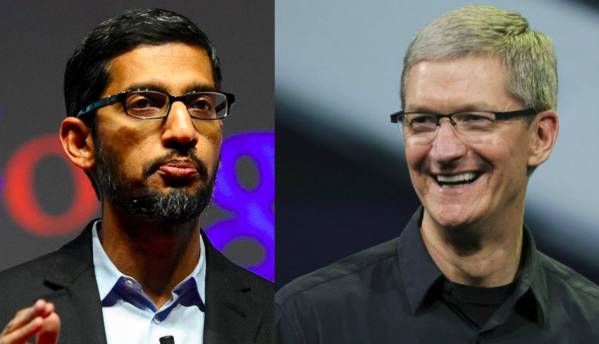 On February 16, 2016, Apple CEO Tim Cook had written an elaborate letter on the US government’s instructions to Apple about helping out the Federal Bureau of Investigation (FBI) in unlocking San Bernardino accused Syed Rizwan Farook’s iPhone, to reveal potentially sensitive and conclusive data. While he stated that Apple has assigned engineers to help out the FBI, he also revealed an FBI request that could have wider ramifications than just solving the legal case.

The FBI has requested Apple to build a backdoor to the iPhone — the accused’s iPhone, in particular, to help peek beyond the security encryption and settings. However, as Cook has stated, this will have a wider impact than just unlocking one iPhone and cracking the case, which is a rather simple deed. Creating a backdoor for the iPhone would mean creating it for the entirety of iOS and the millions of iPhones around the world, and once the technology is created, destroying it is practically impossible. As a result, the system, that for this case would prove to be good, may end up being a disastrous tool in the wrong hands, and compromise private and sensitive data of millions across the world.

As Cook has stated, “In today’s digital world, the “key” to an encrypted system is a piece of information that unlocks the data, and it is only as secure as the protections around it. Once the information is known, or a way to bypass the code is revealed, the encryption can be defeated by anyone with that knowledge. The government suggests this tool could only be used once, on one phone. But that’s simply not true. Once created, the technique could be used over and over again, on any number of devices. In the physical world, it would be the equivalent of a master key, capable of opening hundreds of millions of locks — from restaurants and banks to stores and homes. No reasonable person would find that acceptable. The government is asking Apple to hack our own users and undermine decades of security advancements that protect our customers — including tens of millions of American citizens — from sophisticated hackers and cybercriminals. The same engineers who built strong encryption into the iPhone to protect our users would, ironically, be ordered to weaken those protections and make our users less safe. We can find no precedent for an American company being forced to expose its customers to a greater risk of attack. For years, cryptologists and national security experts have been warning against weakening encryption. Doing so would hurt only the well-meaning and law-abiding citizens who rely on companies like Apple to protect their data. Criminals and bad actors will still encrypt, using tools that are readily available to them.”

Hours earlier, Google CEO Sundar Pichai tweeted, stating his support for Apple’s stance to defend user security. He stated, across five tweets, “Important post by Tim Cook. Forcing companies to enable hacking could compromise users’ privacy. We know that law enforcement and intelligence agencies face significant challenges in protecting the public against crime and terrorism. We build secure products to keep your information safe and we give law enforcement access to data based on valid legal orders. But that’s wholly different than requiring companies to enable hacking of customer devices & data. Could be a troubling precedent. Looking forward to a thoughtful and open discussion on this important issue.”

Pichai’s opinion reflects that of Cook, who had stated in his letter that this moment calls for public discussion, as users should learn what is at stake at this juncture. The technology giants are standing up for their users’ security, although the data that is stored inside the one particular iPhone can prove to be highly impactful. At the moment, the actions taken can prove to be the bildungsroman of the future, and we stand at a pivot of decision. Should we support the making of a system that has the potential to be fatal in future, or look for different ways to find justice for the criminals? Leave us your thoughts here.