The Motorola has launched its first ever Android One smartphone “One Power” a few months back in India. The phone comes with a notched display and is powered by a Qualcomm Snapdragon 636 processor. On the other hand, we have the Xiaomi Redmi 6 Pro that comes with a dual camera setup at back. Let’s do a quick specs comparison to know which one is the better device in terms of hardware? 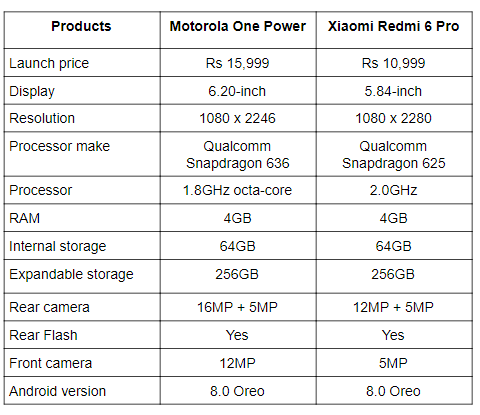 As far as the cameras are concerned, the Motorola one Power has 16MP + 5MP rear cameras along with a 12MP sensor on the front, while the Xiaomi Redmi 6 Pro features a dual 12MP + 5MP camera set up at the back with a 5MP sensor at the front.

Before you come to any conclusion, one should keep in mind that the Motorola One Power is a part of Google’s Android one program, which means the device will receive updates sooner than the other devices from Google directly.