The Huawei Mate 20 Pro is might be the best device that has been released by the company till the date. The phone comes with a big 6.39-inch display that offers a QHD resolution and has triple sensors on the back. On the other hand, Google’s Pixel lineup has always been considered as the best devices when it comes to the camera quality. However, now there are plenty of smartphones out there in the market, which comes with great rear cameras even in the budget segment. The Google Pixel 3XL also has a big OLED screen that has a notch on top of it. Let’s do a quick specs comparison first to know which one packs better hardware under its hood? 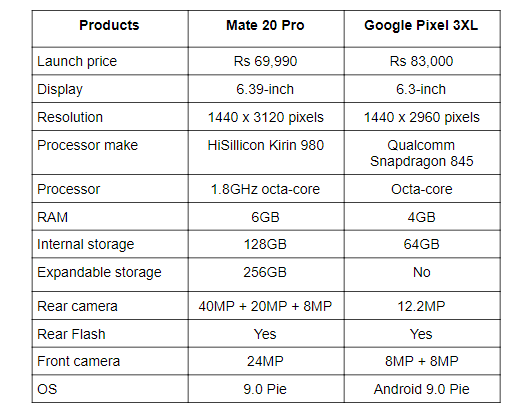 When it comes to the performance, the Huawei Mate 20 Pro is powered by a Kirin 980 octa-core processor, while the Google Pixel 3XL is backed by a Qualcomm Snapdragon 845 processor, which is coupled with 4GB RAM and 64GB internal memory, which is not expandable.

As far as the cameras are concerned, one of the main highlights of the Huawei Mate 20 Pro is its triple rear cameras. The Huawei Mate 20 Pro sports 40MP + 20MP+ 8MP camera set up at the back along with a 24MP sensor on the front. When it comes to the Google Pixel 3XL, the device is also very popular in the market because of the camera quality it offers.  The phone has a 12.2 MP sensor on the back with a dual 8MP units at the front.

Besides that, pricing is also very crucial that everyone takes into consideration. The Google Pixel 3XL is now available on Amazon India for Rs 75,199. On the other hand, the Huawei Mate 20 Pro is priced at Rs 69,990 in India.