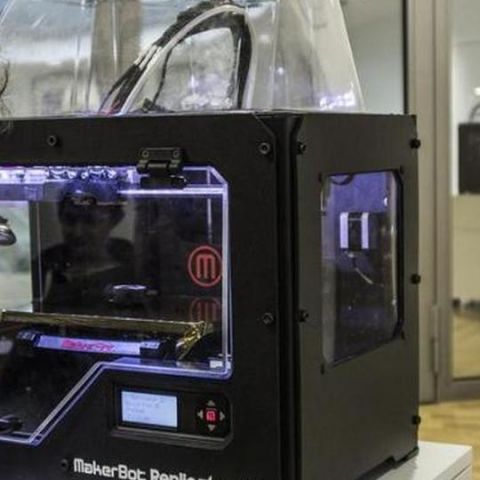 Scientists have invented a Star Trek-style transporter that can scan an object and create its mirror image at another location using a 3D printer.

German scientists have created a new Star Trek-style teleporter dubbed 'Scotty' that can scan an object and ‘beam’ it to another location. The machine actually scans a physical object while obliterating it, then transmits the data over the internet and re-builds it in a new location using a 3D printer.

Invented by scientists at the German Hasso Plattner Institute the device is modeled as an early prototype for a Star Trek teleportation machine and has been named 'Scotty' after the chief engineer on the Starship Enterprise, who Captain Kirk was regularly seen to order: "beam me up".

The machine scans the physical object with a camera layer-by-layer by slicing it to get a detailed view. Then it transmits the detailed model over the internet to a second machine which reconstructs it with a 3D printer. All the work is hidden from the user, who just has to place an object in the printer, enter an address and just press the relocate button.

The technology could be used in the future by companies who wish to retail products to 3D printer owners. Retailers will be able to ensure a product can be sold and printed without the risk of pirates selling off additional copies of their 3D printed products.

Scientists from the Hasso Plattner Institute in Germany stated, "We present a simple self-contained appliance that allows relocating inanimate physical objects across distance."

"Scotty guarantees that a personal, handmade gift remains unique when sent across distances, i.e. that there is no other copy — an important aspect that emphasizes the intimate relationship between sender and receiver," researchers said.

Read: 3D printer Zeus teleports objects by "faxing" them to other printers

Read: $200 Micro 3D Printer raises over $1M in a day on Kickstarter