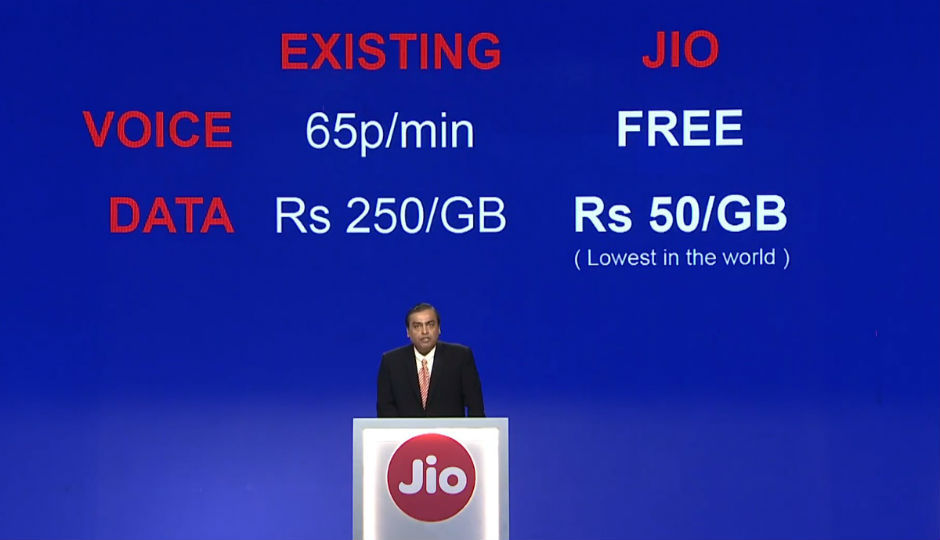 Reliance Jio is all set to make a significant announcement later today. Reliance Industries Chairman Mukesh Ambani will address stakeholders via live video broadcast where he is expected to unveil the future plans for Jio and telecommunication industry in India. The announcement is expected to happen at 1.30PM and same can be viewed on YouTube, Twitter and Facebook.

Reliance Jio's entry has fueled a new life into India's telecommunication segment where the company has already managed to add 50 million subscribers since its public availability on September 5. Reliance Jio is taking on the big names like Airtel, Vodafone and Idea by offering its service as a 4G only service from the ground up. At the moment, Reliance Jio is offering free voice calls, 4G data under its 'Free Welcome Offer' and here is what we can expect from Ambani today:

Post that announcement, Jio confirmed that existing subscribers will get the service beyond December 3 but it didn't mention about new subscribers joining the service after December 3. We could hear from Mukesh Ambani about the plan ahead.

At this point, we don't have much clarity on Reliance Jio's ongoing battle with Airtel and other telecom providers regarding interconnect points. TRAI has allowed Jio to offer free voice calls to its users for life but its users have constantly complained about calls not getting connected. Does Reliance Jio have a fix for that? If yes then we hope to hear about it later today.

4G feature phone: While Reliance Jio is being said to be different from Reliance Digital's LYF brand, the best way to experience the service yet is by buying a LYF branded handset. Reliance LYF Android smartphones start for as low as Rs 2,999 and the company is rumoured to introduce even cheaper 4G-enabled feature phones costing less than Rs 1,500. We may hear about that plan today but Reliance has not been vocal about its ideas.

Public WiFi: Reliance Jio has been pushing the Digital India bandwagon and the next step in that direction would be to roll out of free public WiFi. Back in September, Reliance Jio had announced its tariff plans which included mobile data and WiFi data. The WiFi data allowed Jio subscribers to connect to a Jio hotspot and access data from the wireless connection. Today, Ambani might announce availability of Jio public WiFi at some locations with more spots being added next year.

Next wave of growth: For Jio, its ambitions aren't just limited to mobile service. Reliance Jio wants to be your single service for everything - from mobile to television. The company has already started testing FTTH service in parts of Mumbai and Pune, with promise of gigabit speeds.

5G and gigabit broadband are the next big things in the world of connectivity and Jio wants to be the first service provider to offer the service in India. The company has already done some initial field trials and today we could hear plans about public rollout. Also worth mentioning is the fact that Jio could also bundle DTH service with its Fibre To The Home (FTTH) service.