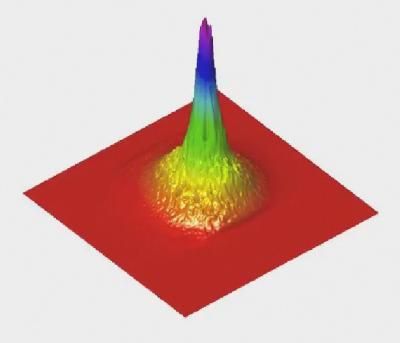 [RELATED_ARTICLE]In the "so-futuristic-it-hurts" category, Princeton engineers have come up with a way to create a laser beam out of thin air. Their method, published in the journal Science yesterday, uses a focused laser pulse which causes another beam to be created from the air, carrying fingerprints of any molecules it encounters to a receiver. The effect comes from the first laser energizing oxygen atoms in a specific area and, as they cool, causing them to release infrared light, exciting more atoms and amplifying the process.

Besides the cool factor that comes with being able to create a laser beam out of nothing but surrounding atmosphere, the device is a very effective way of detecting contaminants, like bombs or hazardous gasses, research group leader Richard Miles said in this article on physorg.com. According to the story, the group envisions a device small enough that it could be mounted on a tank and used to search a roadway for bombs, making it not just cool as a gadget, but also a potential life saver for troops in Iraq and Afghanistan.
[via physorg.com]