OurMine hacks BuzzFeed for reporting fake news about them 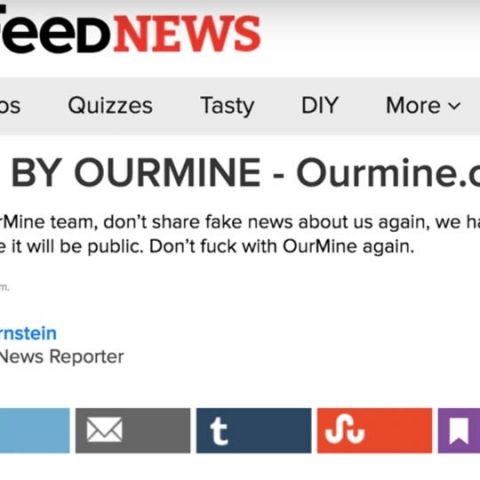 Several BuzzFeed posts were recently vandalised by the hacking group OurMine. Their reason for doing this is apparently retaliation for a story by BuzzFeed on Tuesday that claimed OurMine wasn’t actually a group but a single Saudi Arabian high schooler.

BuzzFeed’s site was attacked the morning following the post. OurMine, changed the titles of various BuzzFeed posts to read “Hacked by OurMine” and advertise their own website Ourmine.org. The altered articles also had a body of text warning BuzzFeed not to “share fake news about us (OurMine) again.” Furthermore, they also claimed that they had BuzzFeed’s entire “database” and would have no qualms about publishing it if they didn’t heed their warning.

The hack occurred after BuzzFeed ran a story on OurMine which also identified a teenager who was apparently a member of the group. OurMine initially denied the post claiming that the person who made the report was “just a fan” of their hacking. However, today’s attack seems odd after making a denial like the one they did.

BuzzFeed didn’t have anything more to say regarding how OurMine was able to hack or breach into their systems. OurMine has been able to successfully use passwords leaked in large-scale hacks to hack into accounts where the same password was re-used. The group is known for taking credit for the hack and claims it does to so test people’s security and of the dangers of reusing the same password.

This isn’t the first time OurMine has been in the news for hacking, though, they have taken responsibility for a number of social media hacks in the past few months, including taking over the accounts of CEOs of Facebook, Google, and Twitter. Earlier this year they also broke into Variety’s website, also sending out an email to its subscribers which said OurMine was just “testing your security.”

BuzzFeed, on the other hand, was quick to take down the vandalised pages. The site via tweet says it’s now “working to restore” the articles, including the original OurMine report.