OpenOffice forked as LibreOffice; to be developed by The Document Foundation In order to ramp up the evolution of OpenOffice.org, community members have decided to fork the project and develop it under an independent foundation. For this purpose they have set up The Document Foundation which will be driving the further development of OpenOffice.org under its new name LibreOffice, with the following mission:

“Our mission is to facilitate the evolution of the OpenOffice.org Community into a new open, independent, and meritocratic organizational structure within the next few months. An independent Foundation is a better match to the values of our contributors, users, and supporters, and will enable a more effective, efficient, transparent, and inclusive Community. We will protect past investments by building on the solid achievements of our first decade, encourage wide participation in the Community, and co-ordinate activity across the Community.

[RELATED_ARTICLE]OpenOffice.org is possibly the most popular open source office suite for Windows and Linux, and has a port available for Mac OSX as well. It was mainly developed by Sun, and used as a base for their own commercial version of the suite called StarOffice. With the recent acquisition of Sun by Oracle, OpenOffice.org is now in development under Oracle. While making LibreOffice independent of Oracle, it is still invited to help with the development of the office suite in its new home.

The Document Foundation also needs Oracle’s approval before using the OpenOffice.org brand, hence the name “LibreOffice,” and in case they do get Oracle’s approval, it will simplify matter quite a bit as the office suite could then continue to go by its original familiar name under the new foundation.

What The Document Foundation is aiming to do is similar to what has happened with Firefox. Mozilla Firefox’s past lies in the Netscape browser which was open sourced and developed by the independent Mozilla Foundation into what it is today. Hopefully LibreOffice will have a similar effect on Microsoft Office as Firefox had on Internet Explorer.

While The Document Foundation, and LibreOffice are both still in the nascent stages, they have already released a beta version of LibreOffice which can be downloaded for Windows, Linux (32-bit or 64-bit) and Mac OSX from the Document Foundation’s website, with the caveat that it is only available in US English as of now. LibreOffice will include some of the enhancements that are included in the Go-OO version of OpenOffice.org. 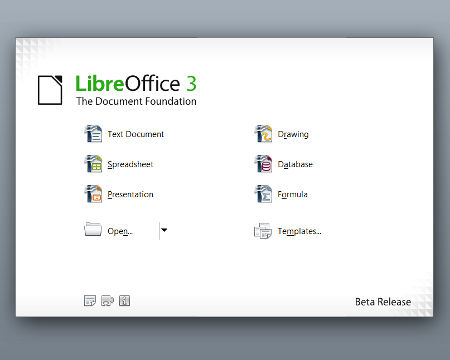 Currently the task of re-branding OpenOffice.org as LibreOffice is not complete, and those testing out the office suite are likely to find icons, dialogs or graphics reminiscent of OpenOffice.org.

This is quite good news for those who were uncertain of the future of OpenOffice.org in it’s new home at Oracle. With even more open development of the application under The Document Foundation, the office suite is sure to see more community-directed developments in the future. Major corporations such as Novell, Canonical, Red Hat, and Google, have come in support of this venture, along with members of the GNOME Foundation, the Open Source Initiative, and the Free Software Foundation.

Certainly a vendor-independent open source office suite which can challenge the foothold of Microsoft office is beneficial to the open source community. Hopefully Oracle will be kind enough to donate the OpenOffice.org brand to the new foundation so issues of re-branding and promoting the same product under a different name wont occur.