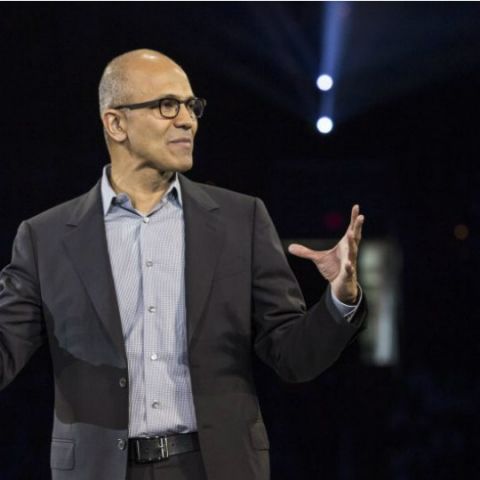 Microsoft's India-born CEO, Satya Nadella took to the stage in New Delhi today to talk about his book Hit Refresh - The Quest to Rediscover Microsoft’s Soul and Imagine a Better Future for Everyone.

Nadella engaged in a panel discussion with former Indian cricketer Anil Kumble, and the duo took the audience through their respective personal and professional journeys, as well as all the moments that made them “Hit Refresh” in life.

Recounting the birth of his eldest son Zain, Nadella opened up about learning important lessons in empathy stemming from his personal experience of raising a child with severe disabilities.

Discussing the Microsoft CEO’s passion for cricket, Kumble and Nadella also spoke about technology in sports, with the former spinner (and an engineer by qualification) discerning that the influx of tech in sports is inevitable as broadcasters look for newer ways of entertaining and engaging audiences.

Throwing back to his cricketing days, Kumble spoke about his first encounter with technology on the pitch - Stump microphones. He recalled how audiences loved being able to hear the wicket keeper during a match and how far technology has come in improving the game of cricket since then.

The conversation then moved on to Nadella and his outlook for the future of technology, as well as some of the key areas of focus for Microsoft.

The CEO talked about three technologies that, according to him, will define time to come - enhancing the man-machine interface, big data & AI, and Quantum Computing.

Discussing the progress made when it comes to Human-Machine interfaces, Nadella spoke about how smartphones, voice assistants and even something like Microsoft Ink have made man-machine interactions more natural and intuitive.

“The ultimate computing experience in my mind is Mixed Reality. You can now, right in front of your eyes, have the really world and the virtual world, and blend the two together,” said Nadella. The statement was an obvious nod to Microsoft’s Mixed Reality ambitions with the HoloLens as well as standalone Mixed Reality headsets that were announced at Microsoft Build earlier this year. “Teleportation is no longer Star Trek, it’s sort of possible in real life,” he added.

Highlighting the importance of Big Data and Artificial Intelligence, Nadella said, “The currency of our times would be your ability to collect data. But more importantly, to reason over it with great intelligence.”

Lastly, Nadella spoke about Microsoft’s long-term horizon bet of creating a Quantum Computer by combining novel ideas in mathematics, physics and computer science. “The enzyme used in food production cannot be modelled, in fact it will take a classic computer from Big Bang till now to do so. but, a Quantum Computer can solve that,” he said.

Nadella was in India to visit his hometown and for the publicity of his book 'Hit Refresh'. Nadella elaborates on all the above mentioned ideas, including - his journey from Hyderabad to Redmond, on being the third CEO of Microsoft and the future of the software giant - in his book Hit Refresh.