Meet Q-Poc, the smart device that can diagnose diseases in 20 minutes 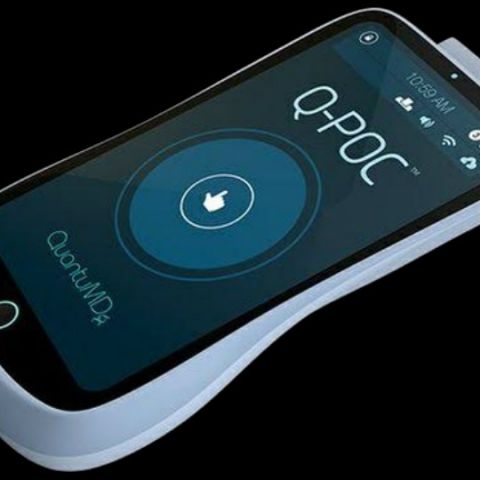 A British start-up has invented a DNA analyser that speeds up diagnosis process, and is a brilliant contribution to the global healthcare community.

Britain-based technology fir, QuantuMDx, has developed Q-Poc, also called the “handheld lab”. The device is a low-cost, smartphone-sized diagnostic DNA analyser that can supposedly diagnose a wide range of diseases with accuracy, in a matter of minutes. At present, the product is in alpha-testing stage, and the company hopes to get it in doctors’ hands by early-2018. They already have a working prototype, which can detect tuberculosis from a sample in 15-20 minutes.

There has been increasing advances in disease diagnostics, but most technology requires a well-equipped lab and waiting time of a few weeks. Q-Poc aims to solve this need for infrastructure and the long wait-time problem, particularly for the developing world.

The device is designed to read biological samples submitted via a small cartridge, the size of a credit-card. The device can work with a range of samples. For instance, swabs are used to detect sexually-transmitted infections, and sputum (mixture of saliva and mucus taken from the respiratory tract) is used to detect tuberculosis. One remarkable feature is that the device runs on a solar-powered battery, or wind-up device. The device also has a built-in cell-phone technology that can be used to geo-stamp and share test results.

The main difference of Q-Poc's operations from other diagnostic tools is that this analyses the DNA of pathogens, rather than the proteins within the sample. This works on ‘microfluidic technology’, where the sample is broken down into a molecular soup, which is then passed via nanoscale filters coated with a negatively charged polymer. This coating repels and sieves the DNA, thereby isolating the DNA required for testing, while holding back other molecules.

QuantuMDx hopes to initially roll out the Q-Poc units in South Africa, before expanding it to other markets across the continent. The Gates Foundation and the Clinton Foundation also have partnered to support this start-up. One main challenge is to get the WHO endorsement for this, which could take years, but the startup is banking on its strategic partner, the Gates Foundation, for discussions with the WHO.

Initially, Q-Poc will be used to test for Tuberculosis (TB), and the tests for other diseases will be added at a later stage. “When we started this, we were very clear that we wanted to address the infectious disease global health challenges and clearly these are in developing nations,” says Jonathon O’Halloran, the company’s co-founder. “Let’s not forget, even Tooting (district in South London) has a prevalence of TB higher than many parts of India."

QuantuMDx also needs to prove efficacy of Q-Poc in a ‘significantly large’ clinical trial, whose cost and scale is a huge burden for a start-up. The initial target price for the device is £1,000 ($1,457) and the company expects that each test should cost below £3 ($4.30). It believes that the can be reduced to around one-third of this price, in a few years’ time.