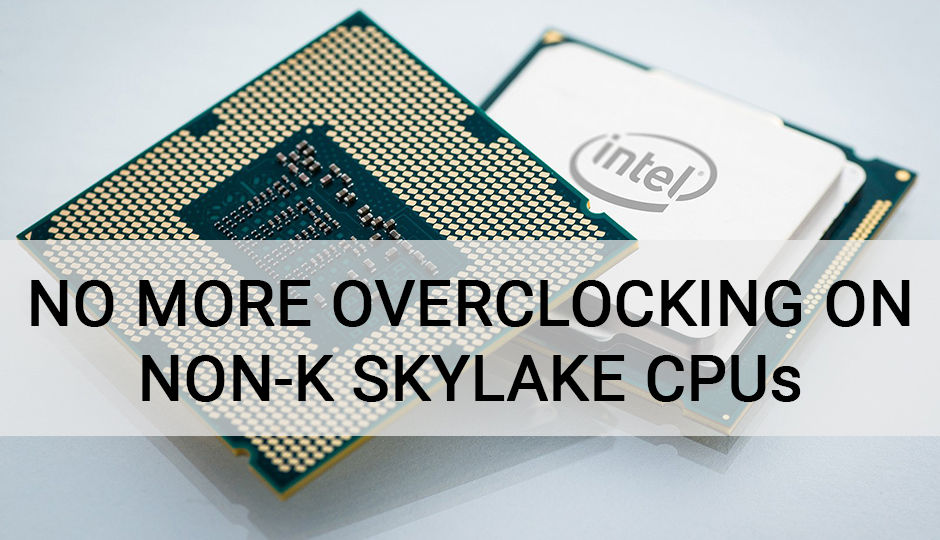 Intel’s Skylake launch brought about an unusual surprise for enthusiasts and average users - even the non-K CPUs could be easily overclocked with the right motherboard. Intel has identified the issue and has now issuing a microcode update to effectively clamp down on this ‘bug’. Overclocking is an exercise that a miniscule percentage of the user base perform but the economic ramification of this unusual bug is quite huge since it renders Intel’s premium processors...well… not worth the premium they are sold at.

Overclocking brings with it a lot of risks including instability, overheating, system failure, etc., but if done correctly, you can put off upgrading your computer for a year or two easily. On Intel processors, overclocking is done by increasing the base clock, increasing the multiplier or by a combination of both. The multiplier option is only available with K-series CPUs. Intel releases a huge array of CPUs each year with multipliers that are set in an increasing order and with each increment in the multiplier value, comes a price premium. The K-series chips cost quite a lot. The Skylake Core i7 6700K costs somewhere around Rs.29,000 while the Core i5 6400 costs roughly half of what the flagship sells for. So by exploiting this loophole, users could effectively make their 6400 into a SKU that would be placed somewhere between the two. The downside was that the onboard IGP (Integrated Graphics Processor) would be disabled as the clock timings of both components are tied together.

ASRock were one of the first to market this bug as a feature for their motherboards and we’re guessing this must have cause some level of discomfort for competing brands. But whatever the reasons may be, Intel has decided to put an end to this and is releasing a microcode update to fix the issue. This update will be paired with the recent Skylake Prime95 bug which we’d written about a while back so if you wish to fix a genuine bug, then you’ll end up losing the overclocking abilities of your non-K CPU as well. The update will be released by individual motherboard manufacturers in the coming weeks.