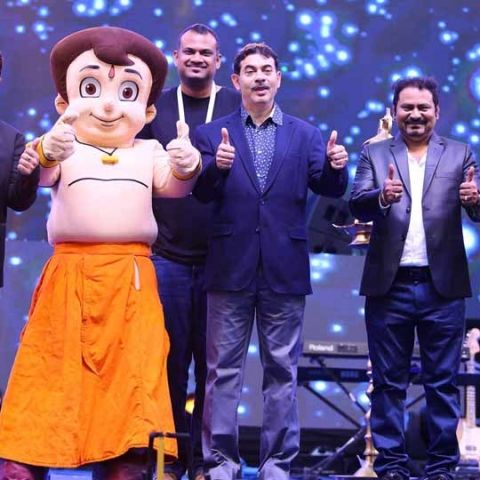 IndiaJoy, a 5-day media and digital entertainment expo kicked off at the HICC and HITEX grounds on this Sunday. Supported by the Telangana government and facilitated by the Telangana VFX, Animation and Gaming Association (TVAGA), the event focuses on the B2B and B2C aspects of the industry. The event brings together VFX studios, game studios, content developers, consumers, investors and software vendors.

The organisers of IndiaJoy call it an aggregator platform and are expecting more than 1000 International visitors and 25,000 delegates from over 30 countries. More than 15 events will be held under the banner of IndiaJoy with the prominent ones being India Game Developers Conference, Unite India 2018, Indywood and Indian Games Expo (IGX). Google Developers, Spark Katalyst, Asifa India, Playmax Interactive, etc., are some of the other key event partners.

Every day will also see a music fest taking centre stage in the evening with notable artists such as Lost at Zaedan, Progressive Brothers, Shorthand, Candice Redding, Nalaayak, The Local Trani, Threeory and others performing.

Speaking at the inauguration of the event, Jayesh Ranjan, principal secretary, Information Technology department, Telangana said, “Hyderabad has witnessed tremendous growth and dynamism in the media and digital industry sector in the last few years, and has far outperformed all other sectors. At this juncture giving a bigger push to the sector by organising a mega event like IndiaJoy makes lot of strategic sense for the government. The government continues to extend crucial support to the sector keeping in view the huge growth potential. We expect more inward investments, more interest among the people to take up a career in the sector, and the emergence of a comprehensive and integrated eco system.”

TVAGA, president, Rajeev Chilaka said, “The media and digital entertainment segment are growing rapidly, and there is strong interest among entrepreneurs, academia and professionals about its promise and potential in the global market. With an event of “IndiaJoy” scale, this is bound to accelerate even further and position India as a favourable trade destination for media and digital entertainment.”