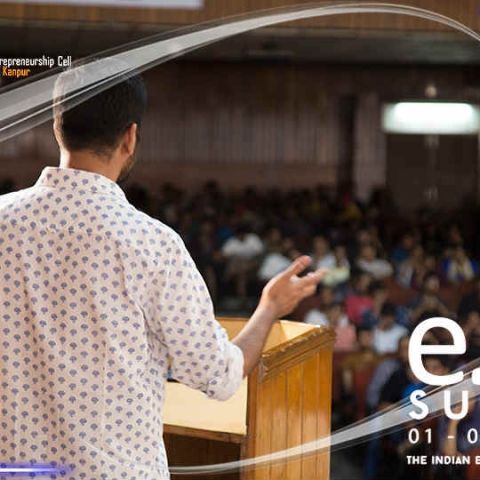 IIT Kanpur recently held the eSummit’17 event a few days ago. Spread over three days, the event hosted talks, chats, workshops and competitions and more for students. A number of notable speakers such as Sanjeev Agarwal, Co-Founder, of Helion Ventures, Aloknath De, CTO, Samsung and more. FireSide chats were held with Aloke Bajpai, CEO of Ixigo and Ankush Sachdeva, Co-Founder of ShareChat.

Nocca Robotics and Aquivio the winners of the Indian Business Model Competition, Upstart. Nocca Robotics are working towards building bots for cleaning solar panels, while Aquvio is a social venture, which gives 70% recovery of water that goes waste in the current model of reverse osmosis based purifiers.

Workshops were conducted by Focus Adventures India and Ivy Cap Ventures with the overall number of attendees being well above 1,500.

With entrepreneurship emerging as a popular choice among an increasingly number of students across all streams, the fact still remains that few of them go on to be successful. 90% of Indian startups fail within the first 5 years of their existence. This goes on to show that there is definitely scope for improvement in the entrepreneurial environment of our country and eSummit’17 at IIT Kanpur was one such endeavour by the student community in association with SBERTC to help those who are looking to venture out or are already on the path for it.
With a series of talk sessions spread over 3 days, students got a chance to interact and learn from some of the most experienced people who’ve made it big. The inauguration ceremony saw the director of the institute, Dr. Indranil Manna, address the gathering while sharing his vision of IIT Kanpur coming at par with institutions such as MIT in terms of entrepreneurial and incubation opportunities. There is a research park of INR 300 crore being established and SIIC at IIT Kanpur already provides students with working space and other facilities. Next up was Mr. Sanjeev Agarwal (Co-Founder, Helion Ventures) talking about his entrepreneurial journey and the important role that the youth have to play today in disruptions in well-established industries, citing Elon Musk as an example. Mr. B.V.R. Mohan Reddy (Chairman, Cyient) emphasized on entrepreneurship being the need of the hour with a short diversion as he recounted his memories of IIT Kanpur. He believes that we as an economy need to generate 100 million jobs in the next 10 years, and 60% of them are going to be from startups and small scale businesses.

The second day starts with Sandeep Aggarwal (Founder, ShopClues) motivating the young age entrepreneurs saying that entrepreneurs are the ones who don’t give up. It takes time for a product to manifest, to establish your enterprise and take it to the next level. A good product is never done. You strive your entire lifetime to improve it. Aloknath De (CTO, Samsung) talks about the efforts of Samsung in implementing models to help over 300 startups incorporate the work being done by them in their own products. He also mentions about the operation of the company in deep-tech sector, making use of technology in agriculture and domestic sectors. Sumit Dutta Chowdhury (Founder, Gaia Smart Cities) laid emphasis on the fact that entrepreneurship is all about solving real life problems. For him being curious and striving to find an answer for ‘WHY?’ is of paramount importance while deciding to startup. Arvind Pradhan (Founder, Camaco LLC) concluded the session by clearing the air on something which still remains a major misconception till date; he says – A blue blooded MBA doesn’t make an entrepreneur, being stupid and overconfident enough to work even when everything works against you does. He feels the power of self-belief cannot to understated and it is something that the new age entrepreneurs continuously fail to grasp.

Since entrepreneurship isn’t all about money, it’s also about making an impact in people’s lives; Socha Unconvention was a talk session exclusively with the social entrepreneurs. From Asheesh Gupta, who started Samarth community to make the lives of elderly easier to Firdaus Kharas, the man who is using video and animation to better lives around the world easier; these people are truly an inspiration for everyone around them. Hasina Kharbhih is bringing the public and private resources to combat the issue of Human Trafficking while K.C. Mishra is working relentlessly towards creating sustainable models of social development for past 30 years.

A FireSide chat with Aloke Bajpai (CEO, Ixigo) and Ankush Sachdeva (Co-Founder, ShareChat) went down the memory lane with audience while answering a host of questions ranging from when did they figure out entrepreneurship is the way to go to role of higher education in starting up. Needless to say, the strong connect they had with the youth coupled with their not-so-formal demeanour, ignited the spark in almost everyone present there to venture out and try something new.

The competitions turned out to be a huge success with winners of the flagship Indian Business Model Competition – Upstart - being Nocca Robotics, a hardware startup by students just barely out of college who’re working towards building bots for solar panel cleaning and Aquvio, a social venture which gives 70% recovery of the water which goes waste in the current model of reverse osmosis based purifiers. With an experienced judging panel comprising of the likes of Rishabh Katiyar (VC Investing and M&A at InfoEdge) and Gaurav (Founder, Infotech Hub), the participants appreciated the constructive feedback received on all ends.

The workshops too saw an overwhelming response where the audience couldn’t get enough selfies with the man who conducted the one on Design Thinking – Prakash Maheshwari from Focus Adventures India and got all their queries pertaining to Fundraising answered in the one by Ivy Cap ventures. With the overall number of attendees well above 1500, everyone left the summit better equipped to handle real life challenges and a different perspective of the world.

This summit started off as an endeavour towards ‘Seeding the Impact’ of all the ideas of all entrepreneurs out there and with the plethora of sessions and skill building exercises in conjunction with multiple networking opportunities, it has laid the firm foundation for quite a few ideas and ignited the spark in young minds to come up with a few ones too.