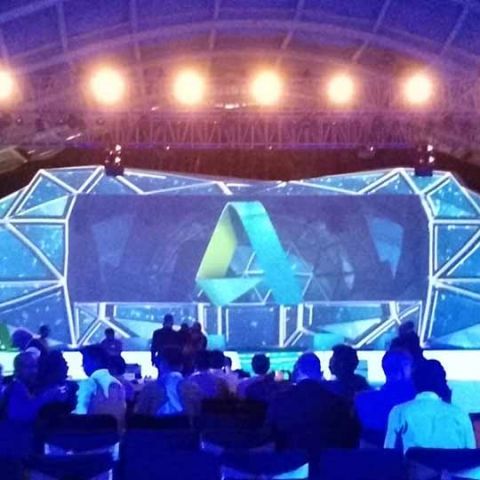 Autodesk University India 2016, the annual flagship event from Autodesk, was organised today on the 1st September, 2016. The event saw multiple imminent speakers enlighten the audience about the current state of the design industry as well the future where it is headed. They also spoke about some very interesting product changes from Autodesk.

Patrick Williams, Senior Vice President APAC, AUTODESK, started off the event by highlighting the importance of harnessing the latest technology when it comes to making Make in India a success. He also stated that according to findings, the local manufacturing industry is going to be worth around 1 trillion USD by 2025, and with that in perspective, it is imperative that the industry catches up to the latest technology trends and that is exactly what Autodesk aims to do. With the gradual merging of manufacturing and the design process, being able to use the easiest tools for optimizing the entire process has become very important.

Pradeep Nair, Managing Director, Autodesk India & SAARC, highlighted Autodesk’s contributions to the Make in India initiative from the Government of India. Autodesk had signed an MoU with the Government of Maharashtra to provide their cloud based CAD solution Fusion 360 at attractive costs and in some cases, even for free to small scale entrepreneurs and MSMEs. These Fusion partners were invited on stage and felicitated. 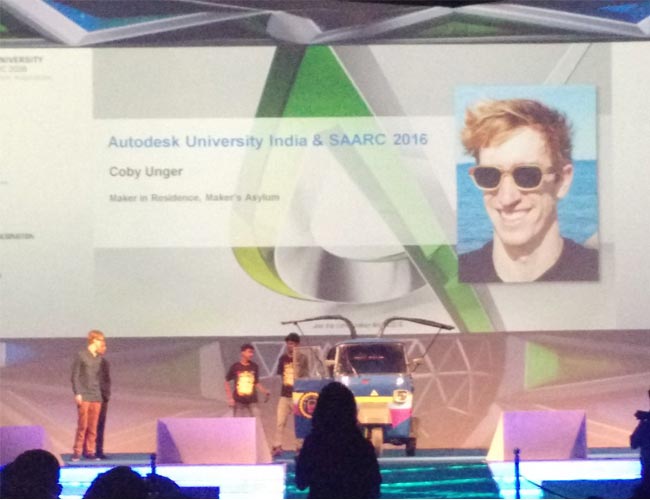 The Maker's Auto team with the Auto onstage

Also highlighted was the Maker's Auto, which was launched last month at the Maker's Asylum in Mumbai. The Auto was developed by Maker in Residence Coby Unger with his team, with the aim of promoting hands on work and development across the city.

Before we say anything else, we just have to give a hat-tip to Steve Blum for his amazing entrance into the keynote auditorium. 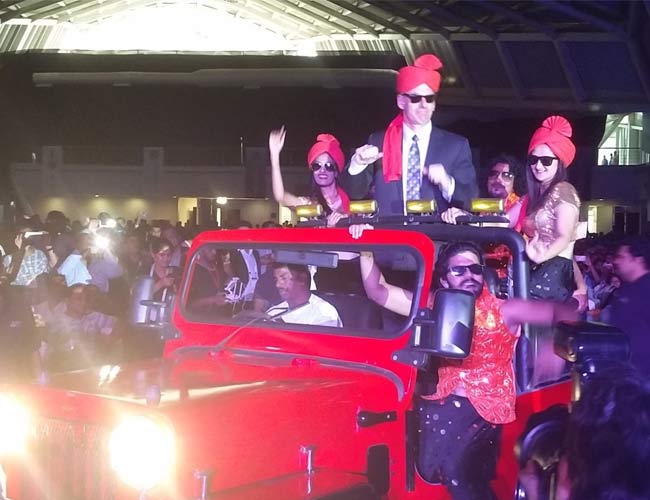 Post that Mr. Steve Blum, Senior Vice President, Worldwide sales and Services at AUTODESK, took us through several brilliant examples of how innovation in the design process has completely changes the way certain companies are operating and solving problems. Some of the interesting ones are: 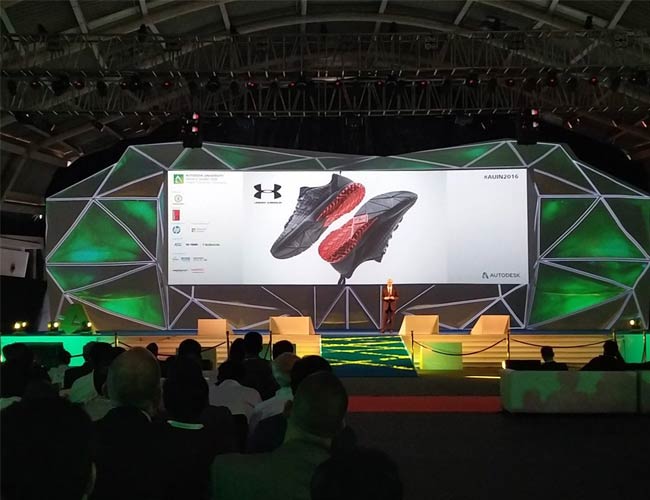 Mr. Patrick Williams announced the new Autodesk Collections, under which Autodesk will be offering its products under 3 industry targeted suites. The suites are: 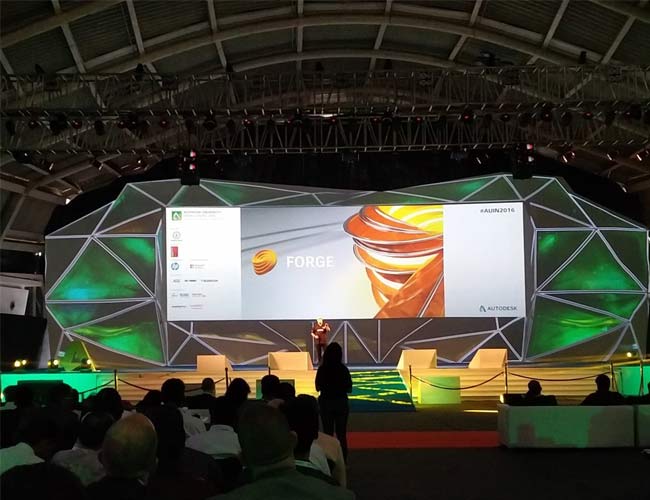 Mr. Williams also showcased Autodesk foundation, which is a CSR undertaking from Autodesk, under which they have sponsored multiple NGOs and social organisations to help them achieve their goals.

We also got to know about some really interesting and significant undertakings from Autodesk. They have worked with the Government of Rajasthan to digitise heritage structures completely, so that they can be experienced and remembered for longer. Along with that, they have also worked with NASA and the Smithsonian Museum to create a digital model of the original Apollo 11 capsule that landed on the moon. You can check it out here.

An entire section was devoted to stalls that demonstrated Autodesk's diverse portfolio of products, like Stingray, Autodesk's offering for 3D game development and design visualisation. There were also stalls that highlighted partner products like the Microsoft Surface. 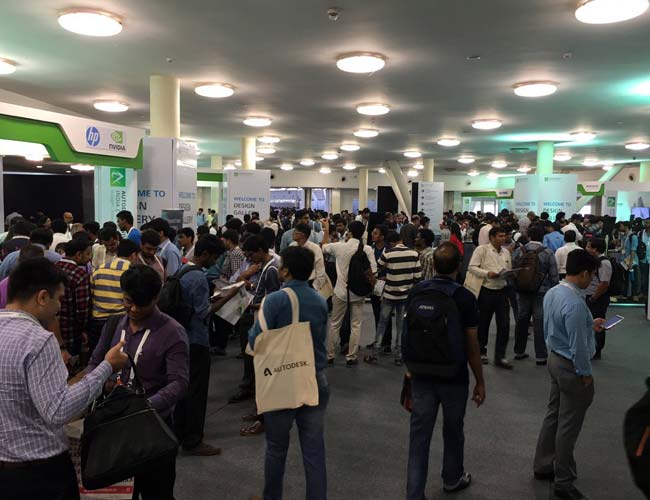 An entire floor at the event was dedicated to the India Maker Movement, another Autodesk initiative to highlight Makers and the Maker culture in India. We interacted with almost all the makers present and it was really exciting to see the kind of work they have done. From a fully functional mind controlled wheelchair to a physical automated chessboard, from an open source Satellite base station to a prototype for a smart ring, the ideas ranged across all possible areas and every maker was equally enthusiastic about what they had created. 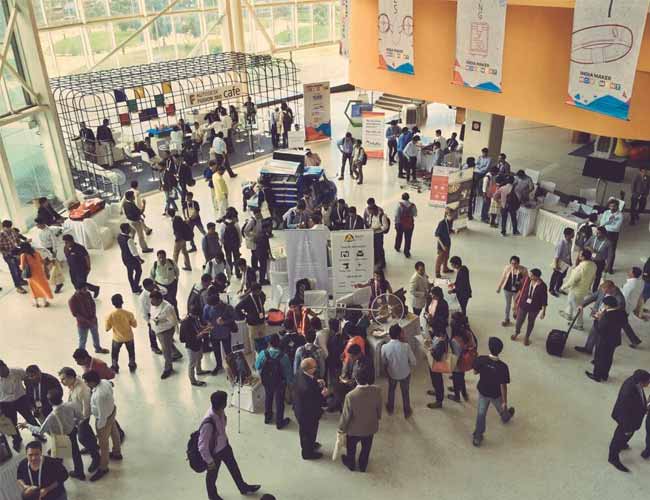 The India Maker Movement space at the event - These guys make stuff up!!

Right from the beginning, it was quite evident that the event was a success, with the large crowd that had showed up at the venue and was enthusiastically attending each session. Insights from the Industry experts were really informative and we are quite sure that Autodesk did not fail to create an impression on the young students and decision makers in the crowd.