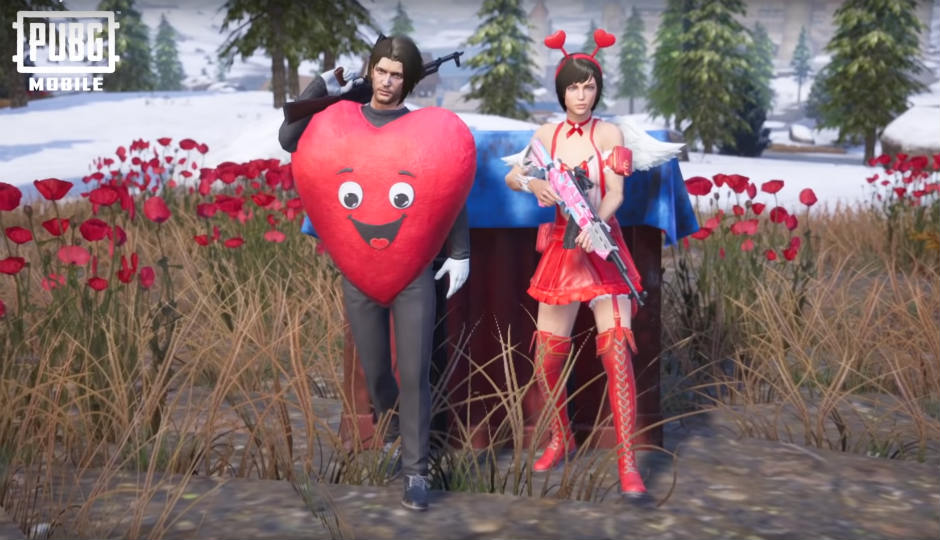 PUBG Mobile gets new costumes in celebration of Valentine's Day

If you and your better half like nothing better than to team up in PUBG Mobile, then the game developers had added something that should interest you. As part of Valentine's Day, players can purchase a special crate that gives them a chance to win love-themed goodies. This includes a red and white dress with small angel wings on the back as well a large smiling heart cupid costume. Accessories include  a headband with hearts on it as well as pink and white skins for the SKS and QBU weapons.

The developers teased the new costumes via a post on Twitter that shows a male character wearing the heart costume fighting alongside his female teammate wearing the red and white dress. However, these costumes are not limited to any particular gender, so anyone can wear them. Afterall, who are we to judge?

However, it should be noted that the new costumes are a part of a lucky crate and it doesn’t look like you are guaranteed to get them when you open it. The crate is priced at 120UC, so you might have to spend some real world cash in order to get it. Furthermore, you are going to be pretty noticeable with your bright red costume, especially in a map like Vikendi where this is snow everywhere.

PUBG Mobile is also expected to be updated to version 0.11.0 soon, which is will bring a new Zombie Mode called RE2: Sunset to the game. The same is already available for those who play the beta version of the game. The mode adds zombies as well a bosses from Resident Evil to the Erangel map and players can kill them for loot. The update may also add new weapons to the game.

There’s no room for love on the battlegrounds. pic.twitter.com/HSxskdqZLc