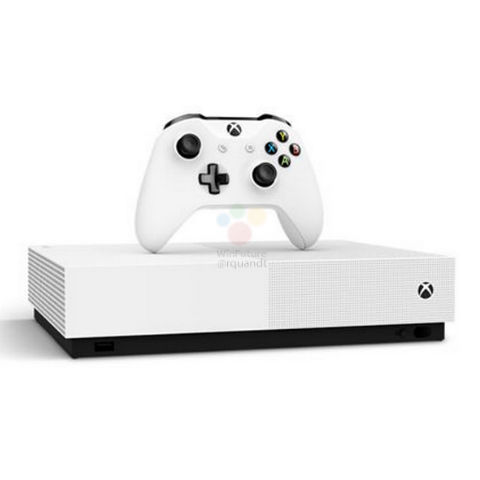 A disc-less Xbox One S could launch on May 4: Report

The internet has been abuzz with information about the new disc-less Xbox One S for quite some time now and it looks like we have some new details about the upcoming console. Packaging material along with renders of the device has leaked and this time we have a price point and a launch date. The leaked renders called the disc-less Xbox One S as the Xbox One S All Digital. The console will come with 1TB of storage, boasts of 4K and HDR capabilities on the box and has no disc drive.

According to the leaked information, users will get the disc-less console in the box along with one controller, three pre-installed digital games - Minecraft, Sea of Thieves and Forza Horizon 3. We assume gamers will get the standard one-month game pass subscription and 15 days gold subscription with the console, but that may change. The console has an expected price of EUR 229.99 (Rs 23,500 approx) directly converted and will launch on May 7 in Europe. There is no information about when the console will launch in other markets.

It was expected that the disc-less Xbox would make its debut at E3 2019. E3 2019 is scheduled to kick off on 11 Jun 2019 and it looks like Microsoft can enjoy a lot of limelight as for the first time in the history of E3, Sony will not be there at the show floor.

Microsoft is expected to showcase its next generation of consoles at E3 and rumour mills are abuzz about what the hardware will have. It is expected to be more powerful than the recently announced Google Stadia and also boast of Ray Tracing. You can check out the details of the rumoured hardware of the upcoming Xbox here.

Before you go ahead and think Microsoft is killing the disc drive we say hold your horses. Microsoft is looking to cater to all kinds of players with its services. It showed off Project X-Cloud where Forza Horizon 4 was running on an Android smartphone with an Xbox One controller. Project X-Cloud is expected to get into public testing soon. You can read more about Microsoft's cloud gaming initiative here. The new flagship consoles are expected to have a disc drive, and we will know more about that at E3. The company already has Play Anywhere for its first-party games which means that you can purchase the game on your Xbox and play it on your PC as well.