WhatsApp now allows users to select and share up to 30 images or videos. 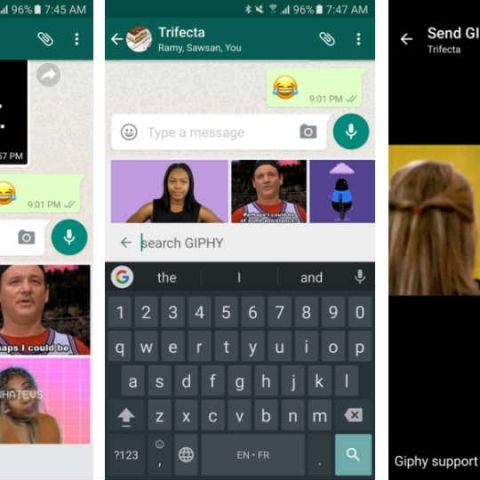 WhatsApp is making it easier than ever before to send GIFs. The latest WhatsApp update adds support for sharing GIF directly by searching and choosing from the popular GIFs.

WhatsApp has been relatively slow when it comes to GIF support. Earlier, WhatsApp required users to convert videos and share them as GIF before adding support to share saved GIFs on our smartphone. WhatsApp for Android update now allows users to simply share GIF by tapping on the emoji button. The new feature spotted by Android Police appears in the bottom bar of the emoji option where users can scroll through all popular GIFs and insert them into the chat right away. The feature also offers option to search Giphy for a particular GIF.

The latest WhatsApp update also increases media sharing limit from 10 to 30. With the latest beta version, WhatsApp users can select and share up to 30 images or videos at once.

WhatsApp, which serves more than a billion users with its messaging app, has been adding new features at a steady pace. WhatsApp recently introduced video calling feature to compete with Facebook Messenger and Skype. The service has also added end-to-end encryption and two-step verification for Android and Windows users.

The GIF support and increased media sharing feature is available with WhatsApp version 2.17.6 beta. The latest version is being rolled out to beta testers and can also be grabbed from APK Mirror.