The new app search results layout shows apps in colorful grids with app ratings, directly accessible from Google Now and Chrome, only on Android as yet 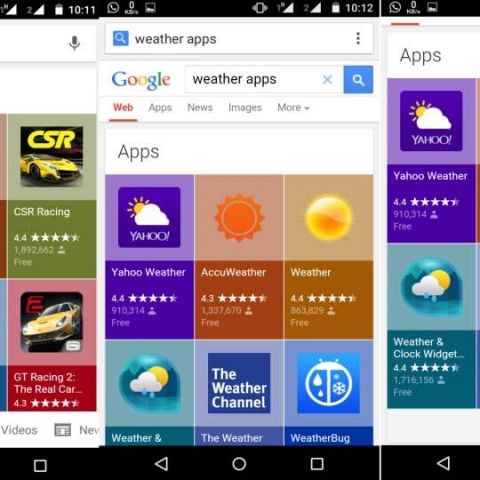 Google has rolled out a new layout for showing app results on Android devices. The new layout is available for app searches via Google's Chrome browser, and Google Now. To check the new layout, one simply needs to make a generalized app search query, like video apps, audio apps, racing games, etc.

If the new layout has been rolled out for the device used to make the search, the user will see apps being listed in colorful grids. Although, as of now, Google also show a couple of apps on random occassions as advertisement at the top before the gridview starts showing up. For each of the apps, its name, icon, average rating and number of ratings are shown. Tapping on a particular app box takes the user to its corresponding page on Google Play Store from where the app can be downloaded. At first, Google shows only six apps related to the search query, but there is an icon at the bottom, labeled as ‘More apps’. Tapping on it shows the rest of the apps, and the user can keep scrolling down until he finds the target app. Users can also tap and hold on any of the app boxes to get options like Open in New Tab, Copy Llink Address and Save Link, but these are available only if the search is made with Chrome.

The new layout looks like a move from Google to make apps easier to be discovered, and find them on the Play Store. The search engine giant is known to make changes to its search results across all the platforms from time to time. However, as per Android Police reports, the new grid layout is rolling out only to Android devices as of now, and there is no word for its availability on other platforms.