The OnePlus 6 comes with an all-glass design, has a notch in the display, rocks flagship-grade processor and comes for half the price of a flagship phone.

Months of leaks, rumours and teasers later, the OnePlus 6 has finally arrived. By the time the event ended in London, everything about the phone was already out in the public domain. The grand launch event ended up merely validating the previous information, but nevertheless, the excitement always hits a tizzy every time a new OnePlus device comes out. And for good reason. Ever since the OnePlus One, the Chinese brand (which now operates at a global scale) has pushed the boundaries of what an affordable phone can bring to the table. Time and again, OnePlus has proven to users that you don’t need to sell a kidney to get a high-end  flagship. The OnePlus 6 once again reiterates that fact. In fact, it happens to be the first phone in India to be powered by the new Snapdragon 845 chipset. Does that make the OnePlus 6 the flagship killer before the new flagships even arrived? It certainly seems so. 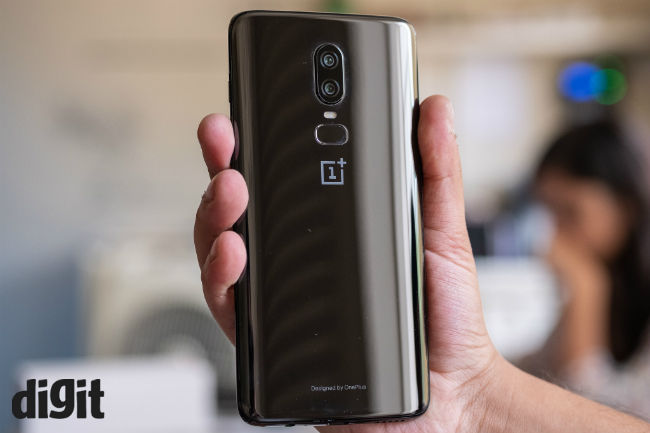 We didn’t have much to complain about last year’s OnePlus 5T (review), and the company has managed to make a phone even better than that. The OnePlus 6 takes everything good about the OnePlus 5T and wraps it in an exquisite glass design. The finish alone can take on the best smartphones out there right now, and then comes the flagship-grade hardware underneath. The phone is housed inside a Corning Gorilla Glass 5 body. Like last time, the body curves gently to meet the edges, but the phone is much thicker this time. It doesn’t take away from the ergonomics though. 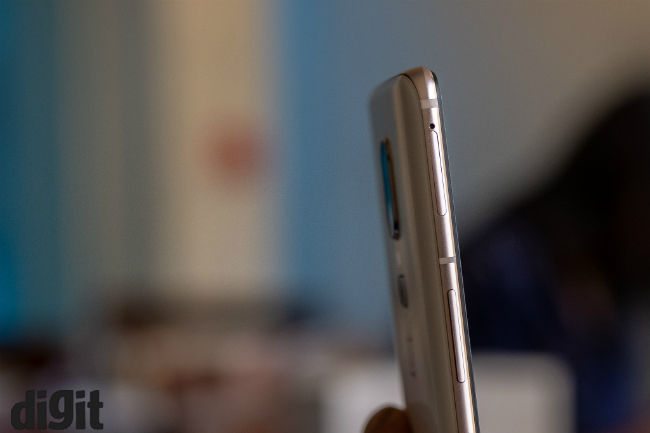 The OnePlus 6 is a little thicker than its predecessor, but it doesn't take away from the ergonomics

OnePlus has worked on the glass panel at the back to give it a smooth texture. It’s a little more slippery than last time, but it also feels much more premium. Especially the Silk White variant. It gives off a subtle shimmering effect which has been achieved by the sprinkling of pearl powder in the body. 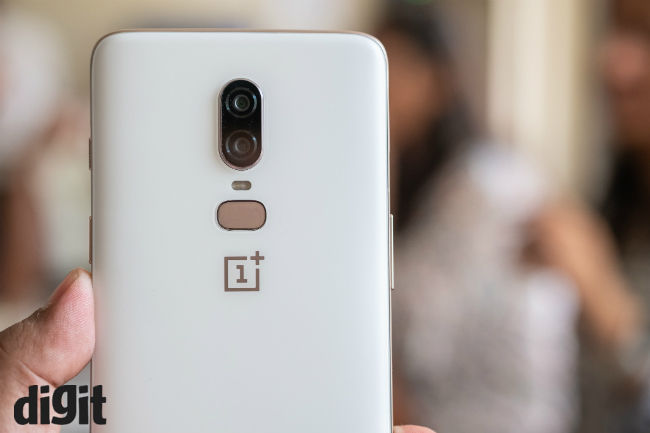 Thanks to the generous use of glass, OnePlus has also managed to make the phone splash-proof. It’s not all-out water resistant, but will allow you to use the phone when its raining or in the shower.

Now, the glass design is premium all right, but was it really necessary? The OnePlus 6 does not come with wireless charging which actually requires a glass body to allow the electromagnetic induction. So the only reason I can fathom for slapping a glass back on the phone is to build up the premium feel of the phone. I’m certainly not complaining about the hand-feel here, but at the same time, I’m also a tad more afraid of dropping this phone and shattering the meticulously designed panel. OnePlus does bundle a TPU case to keep the glass protected from smudges and scratches. Yes, this one is also more likely to get scratched a lot. A case is definitely recommended. 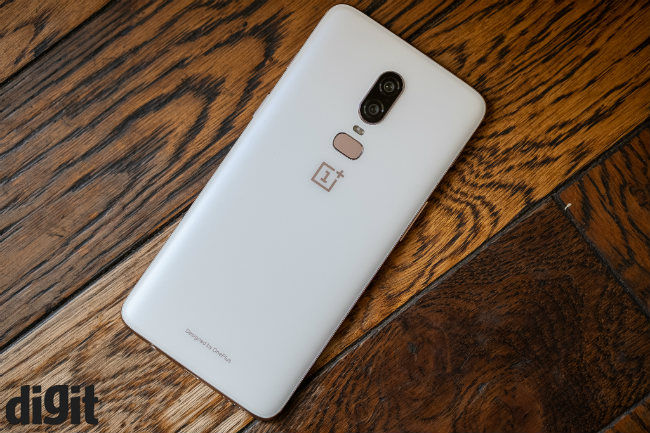 The OnePlus 6 rocks dual cameras aligned vertically in the center

There’s some change in positioning the elements. The dual camera unit, for one, is now vertically aligned and placed right above the fingerprint sensor, which ditches the old circular design for a rounded rectangle. The alert slider has moved from the left edge to the right, much to my detriment as my left-handed self now finds it quite difficult to use it promptly. Right-handed users will find it to be a delight though.

Apart from the glass design, another big change is the notch on top of the display. The 6.28-inch panel on top is the biggest panel seen on a OnePlus device and the company has managed to accomplish it without tampering with the size of the body. Because of the notch, the display stretches almost to the top. It can be argued that the OnePlus 6 becomes another me-too phone when it comes to using the display cutout. The notch is ugly. It's a stopgap solution to making a fully immersive display, and apart from being something new, it's doesn't really serve a purpose.but the notch doesn't come in the way of the content either. The bezels on the sides and the lower chin are even thinner than last time, and everything combined, you get a screen-to-body ratio of 84%. That makes the panel look a lot more immersive. But more than that, for the limited time I used the phone, the display felt much brighter than last year’s. It still relies on the AMOLED panel of full HD+ resolution, but the notch allows for a 19:9 aspect ratio. 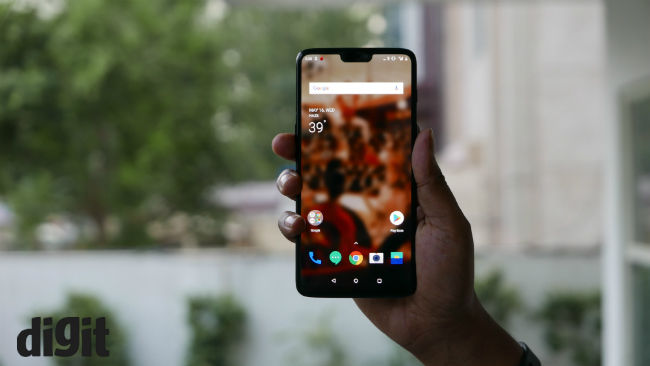 The OnePlus 6 display notch in all its glory

The new aspect ratio doesn’t mess with the content though. The extra space is actually used to make sure the status bar does not come in the way. When a video is playing, the notch is subtly disguised by blacking out that part of the screen. The notch does not seem to come in the way of things at all. But the asymmetry might be bothersome for some.

Once you get past the new design, the OnePlus 6 will feel a lot familiar. It continues to feel super smooth and slick when operating. It’s too early to say whether there has been a sizeable improvement in performance because of the new chipset, but it does feel just as smooth and fast as its predecessor.

We also haven’t tested the camera out intensively to pass a judgement. The dual camera implementation is still the same, but the hardware has been upgraded. The phone now relies on a 16-megapixel IMX 519 sensor with a pixel pitch of 1.22um and f/1.7 aperture, and a 20-megapixel IMX 376K sensor with a pixel pitch of 1.0um and f/1.7 aperture. OnePlus claimed there’s OIS in the camera. It still uses the 16-megapixel + 20-megapixel camera setup. The 20-megapixel sensor is only used when the light is dim. And thanks to OIS, it should perform even better in low-light. There’s a 16-megapixel camera up front which OnePlus announced with receive the ability to take portrait selfies after an update. It’s certainly feature rich and going by the past records of OnePlus devices, I’m looking forward to taking the camera out for a spin.

All said and done, it’s still difficult to say whether this indeed is the flagship killer. Yes, it packs all the latest top-of-the-line hardware, comes in a stunning new design with meticulous attention to detail, all at a price that will put premium flagships to shame. There will be some compromises for sure (a lack of IP rating, less richer display), but all that is expected to keep the price from soaring. One thing’s for sure — Everyone who dreams of owning a reliable flagship but doesn’t have the budget for it will surely keep the OnePlus 6 in their mind. Unless, the flagship-killer segment gets another incumbent soon. 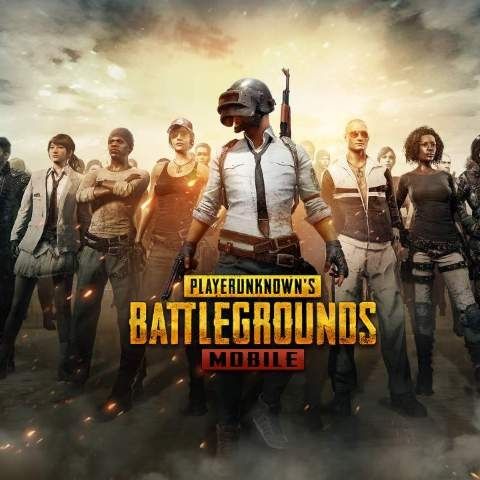 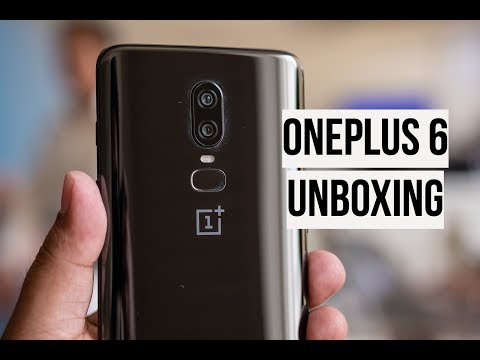