Moto G9 power vs Redmi Note 9 vs Realme 7i: Battle of the budget smartphones 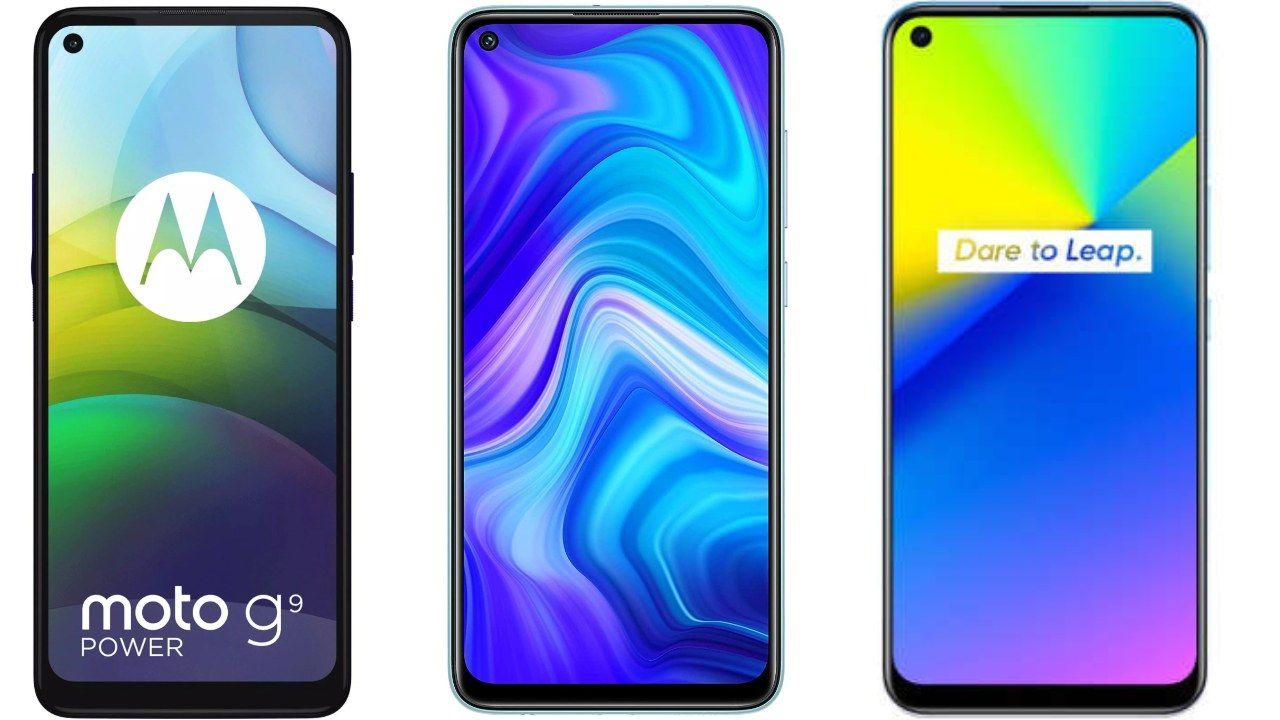 The Motorola Moto G9 power will go on sale on 15 December from 12 PM onwards. It is a budget segment device with a large 6000mAh battery and a  64MP sensor. There are other devices such as Redmi Note 9 and Realme 7i in the same price segment.

Here we compare the specifications of the three phones: Moto G9 Power, Redmi Note 9, Realme 7i and see what each manufacturer has to offer. 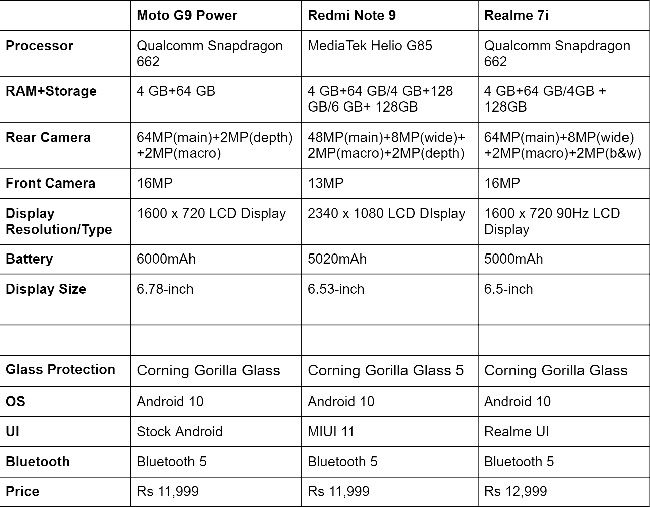 The Moto G9 power comes with a hole punch design in the front and has buttons on either side of the device, the button on the left is dedicated for the Assistant, while the right side of the phone houses power and volume rocker buttons. The back of the phone has the signature Moto logo embedded with a fingerprint sensor and a triple camera setup on the corner.

The Realme 7i sports a flat-screen display and houses the selfie camera in the punch-hole display in the top left corner. The back of the phone is mirror finished and houses a centrally mounted fingerprint sensor and a quad-camera setup at the top corner of the phone.

The Realme 7i has two options: Fusion Blue, Fusion Green.

The Moto G9 power has the largest display in the bunch, it comes with a 6.78-inch screen and 1600 x 720 HD+ resolution at 60Hz. Redmi Note 9 has a full HD+ dot display with a resolution of 2340 x 1080 at a 60Hz refresh rate. The Realme 7i comes with an HD+ screen with a resolution of 1600 x 720 but it has a higher refresh rate at 90Hz. All these devices have an LCD panel with Corning Glass Protection from accidental drops and minor scratches.

Of the three devices, two phones have the same chipset namely the Moto G9 Power and Realme 7i while the Redmi Note 9 packs in MediaTek Helio G85 SoC. The Moto G9 power and Realme 7i are powered by the Snapdragon 662 SoC. All the phones can handle light gaming and simple multitasking operations, as on paper both the CPUs have similar configurations and would not show any noticeable difference in day to day tasks.

The Realme 7i also has a quad-camera setup with a 64MP AI camera, an 8MP ultra-wide-angle lens, a 2MP black and white lens, and a 2MP macro lens.

In comparison, all the phones are similarly specced, with minor variations in layout. The deciding factor is going to be the battery and camera performance. On paper, it looks like the Moto G9 Power has the battery advantage, and in terms of optics, the battle lies between the  Realme 7i or Redmi Note 9. We will know for sure when we pit these devices head to head.

This Motorola Budget Phone Has Launched With Android 12 and a 90Hz Display
Samsung Galaxy M13 Looks Like a Familiar Exynos-Based Budget Phone: Details inside
iPhone 14 To Get A Pricier Selfie Camera, But The Phone's Cost Could Be Hiked
Nothing Phone (1) With Transparent Design Previewed Ahead Of Launch
Xiaomi launches the Redmi Note 11T Pro series along with the Mi Band 7 in China
Advertisements