JioPhone: What we don't know, but need to

The highlight from Reliance Jio’s 40th AGM was the JioPhone(₹ 1500 at amazon). After talking about cheap data connections and offers over the past year or so, Jio seems to be moving to the second phase of its plan. The company has been steadily increasing its portfolio of Lyf branded smartphones, but the JioPhone is a feature phone with 4G connectivity, something Jio has been working on for quite a while now.

But, for everything Mukesh Ambani said at the AGM, we may have more questions than answers now.

What we don’t know

Operating System: Reliance Jio’s announcements only give us the meaty part of the deal. By the looks of things, the JioPhone is smarter than regular feature phones. That leaves us three possibilities for the operating system on it.

The first includes a forked and heavily stripped down version of Android. This is possible since Jio’s apps were originally built for Android and iOS. So, adapting them to an Android-based platform will be easier.

The second option for Jio would have been to build its own ecosystem for feature phones. The company has enough users to get developers interested in the long term, and it would go with Jio’s pitch that it is a technology company first. This, though would mean that Jio had to rebuild its apps for the new platform, and now has to work on developers to build more for it.

Lastly, Jio could be using one of the existing feature phone operating systems, like Series 30+ used on the Nokia 3310. This would need the company to adapt its apps to these platforms, but also give Jio access to pre-existing ecosystem of applications.

The choice of operating system is important here, since it will play a huge rule in determining end-user experience. One could argue that Jio’s target market here is people who do not have access to any smart services, and that end-user experience isn’t as important for such a market, as it is in Tier I and II cities. But as any popular phone will prove, such an approach never works in the longer term.

Update: The JioPhone will be running on the KaiOS platform and will have an app store, supporting HTML5-based applications. KaiOS is a fork of Mozilla's FirefoxOS.

App Support: The new version of the Nokia 3310 supports stripped down versions of Facebook and Twitter, but doesn’t have WhatsApp. And that’s been one of the biggest criticisms for that device. Reliance Jio wouldn’t want that criticism for the JioPhone. In its claimed endeavour of connecting users, Jio needs to ensure that popular apps are supported on its phone.

The easiest way to do this is by offering a version of Android on the phone, since it adds support for the Google Play Store, but it will be interesting to see which route Jio took. According to reports, the phone doesn't have WhatsApp support.

JioPhone TV Cable: “Our young Jio engineers have created an innovation to help them -- a special and affordable ‘JioPhone TV cable’ that connects JioPhone with any TV, not just a smart TV, so that all JioPhone users can enjoy viewing on the big screen of their existing television sets,” said Mukesh Ambani at the AGM.

The JioPhone TV cable sounds a lot like an MHL cable that connects from the phone to the television, via HDMI. Alternatively, it could be a MHL to RCA cable, which would also cover CRT televisions, that are still present in the markets Ambani spoke about. The live TV playback would obviously come from Jio’s own Live TV apps. That said, connecting to a CRT television will still need a digital to analog convertor somewhere in between. Something like this.

Processor: We don’t usually bother about the chipset running on a feature phone, but with everything Reliance Jio has promised, a quad-core chipset will be warranted. Of course, we have seen low power chipsets streaming full HD content, so it shouldn’t be all that difficult either.

Update: Qualcomm confirmed through a tweet that the JioPhone runs on the Snapdragon 205 platform, which is a dual core chipset. Alternatively, Spreadtrum also says it has some involvement in Jio's feature phones. We think this partnership is for future phones, but we're trying to confirm the same at the moment.

Glad to partner with @reliancejio on the new #JioPhone, powered by our #205 mobile platform.

Making India digital with #JioPhone. @Spreadtrum is proud to be a part of the digital freedom for #featurephone users. @Reliancejio

Payments: The selection button on the left of the JioPhone has a rupee symbol on it. It’s possible this button launches the JioMoney app, but it may also be meant for payments made via UPI. That’s utter speculation on our part.

What we do know

Alpha numeric keypad: We only have a single photo to look at, but this should be a T9 keyboard, which is still popular on feature phone.

2.4 inch QVGA display: Again, a popular choice for feature phones, a QVGA display is one with 320x240 pixel resolution.

FM radio: Smartphones have been dropping FM Radio support over time, but there remains a visible demand for this feature. It’s a staple for feature phones though.

Torch light: Another staple for feature phones. Their cameras may not have flash always, but a torchlight is quite common.

SD card slot: An SD card slot is a must for a 4G feature phone. That’s because loading apps will take up space, and feature phones historically have had MBs worth of internal storage.

Four way navigation system: We’re not sure how this one will work, but it’s likely to be an application on the phone, allowing city navigation.

Jio apps: Support for Jio apps was announced by Mukesh Ambani, for the Jio phone. Along with 4G connectivity, this essentially allows users to make the JioPhone a content consumption device.

Voice support: If you look closely at photos of the JioPhone, you will see a voice button at the centre of the D-Pad. You can send text messages and make calls on this using voice calls.

Reliance to relaunch JioPhone in early 2021 priced under Rs 1,000 in India: Report
JioPhone price could be hiked to Rs 999 in India soon: Report
Blackberry 5G phones with QWERTY keyboard set for 2021 launch
Exclusive: Vivo V21 will be one of the slimmest 5G phones in the world and will feature AG glass finish
LG says it will continue to provide software updates to some of its phones even after shutting down the business
Advertisements 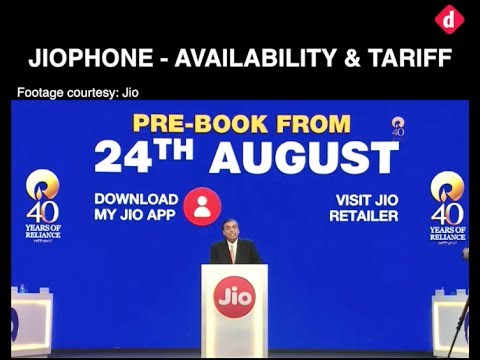