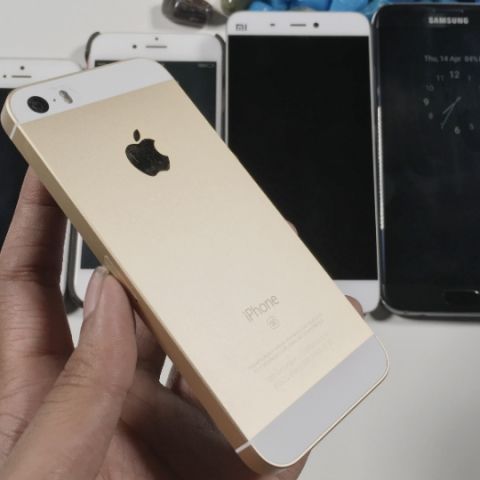 Ever since launch, the iPhone SE has been much discussed, be it for better or worse. The latest 4-inch iPhone has been under the scanner, particularly owing to its pricing. Apple has held fort, stating that the iPhone SE will be a full-fledged flagship for those on the hunt for compact devices. Putting that claim to test, we streamed videos, created and rendered music, played games and ran benchmarks on it, parallely comparing it to the older generation iPhone 5s, the flagship iPhone 6s, and the two leading Android devices in India - Samsung Galaxy S7 Edge and Xiaomi Mi 5.

We spoke about how the iPhone SE is a near-exact replica of the iPhone 5s, in our live discussion on Facebook, yesterday. It is built on the same chassis, but is slightly lighter. It is not built poorly in any way, but feels slightly less sturdy in hand. It houses the same display, and reportedly enhanced battery stamina. In terms of performance, it boasts of a bigger improvement over Apple’s last four-inch device. The iPhone SE houses the A9 processor that also powers the iPhone 6s, along with 2GB of RAM. How does it fare? How powerful is the latest 4-inch device? Does it suffice in terms of gaming and content consumption? We find out all of this, in the comparison below.

Benchmarks
We began the comparison by tallying benchmark scores across the different devices. We ran AnTuTu 6, Geekbench 3 and GFX Benchmark on the devices, and the results we derived are in compliance with expectations. For instance, in GFXBench Manhattan 3.0 Onscreen that puts the graphics performance to test, the iPhone SE renders the maximum number of frames among the devices here. It is powered by the PowerVR GT7600 hexa-core GPU, which renders more frames primarily owing to the smaller display. The iPhone 6s renders slightly lesser frames owing to the larger display, while the Samsung Galaxy S7 Edge, with a 5.5-inch Quad HD display, leaves a heavier task on its GPU and thus renders lesser frames. The Galaxy S7 Edge, however, tops the competition in multi-core score, powered by the octa-core Exynos 8890. The iPhone SE runs on the dual-core Apple A9 processor clocked at 1.84GHz, and while its single-core performance ahead of others, it falls significantly behind Exynos 8890, and slightly behind the Xiaomi Mi 5. It is worth noting that the Mi 5 has a downclocked version of the Snapdragon 820, which means its single core performance can be better still.

Real-world usage
All of this, however, are sheer statistics. The iPhone SE is a fast device. In fact, after having used the iPhone 5s for so long, the iPhone SE almost feels like an ideal replacement in hand for the 5s. It is exactly the same size, and performs on the same note as the iPhone 6s. The iPhone SE gets rid of all the split-second lags and stutters that the iPhone 5s now faces. It unlocks faster, the apps do not take significantly longer to open, the camera is smooth, and the biggest area of improvement is in gaming.

We have been playing Asphalt 8: Airborne extensively, and the smaller display renders rich graphics, and gameplay is absolutely glitch-free. As the benchmarks reflect, the latest generation of processor lends flagship-class performance, while the smaller display leads to denser visuals. Additionally, 2GB of RAM on the iPhone SE makes the entire experience much, much better than what the experience is on the iPhone 5s. Just as the benchmark scores reflect, the iPhone SE is indeed a flagship smartphone that will not only run almost all of the latest apps and games, but do so with ease.

The small screen debacle
A more pertinent question that has been circulating is whether a ‘tiny’, 4-inch display makes sense in the present generation of devices with 5.5-inch or larger screen sizes. With VR headsets relying on mobile devices, and mobile consumption on-the-go increasing steadily, the viability of a 4-inch device is debatable. Content viewing remains decent mostly because of the good colour reproduction, sharpness and contrast, but admittedly, the 4-inch screen size does feel too restricted nowadays. It does help in terms of graphics, and will save on battery stamina, too, but the essence of owning a flagship-class device is hampered nowadays, as we steadily move to large screen, video-centric content consumption.

As Apple states, the iPhone SE is for those on the lookout for a compact flagship smartphone, and for that niche community, there may never be a better small device to own than the iPhone SE. For those using an iPhone 4/4s/5s, this can be a very good upgrade. For first-time buyers, an iPhone 6 (or 6s, of course) would be the ideal choice. The iPhone 6 is presently available at around the 30k price point, which is what the iPhone SE may have become a runaway hit. At Rs. 39,000 for the 16GB variant, it is difficult to justify, particularly when the iPhone 6s is available at around Rs. 43,000.

Xiaomi 12 series with Snapdragon 8 Gen1 and MIUI 13 launched in China
Apple's iPhone 15 Pro could launch with a 5x periscope camera
iQOO NEO 5 SE, iQOO NEO 5S launched: Price, specifications and more
iPhone SE 3 tipped for Q1 2022 launch: Expected features, specs and everything you need to know
iPhone XR available at a heavy discount: Here's how you can buy it for Rs 17,599
Advertisements