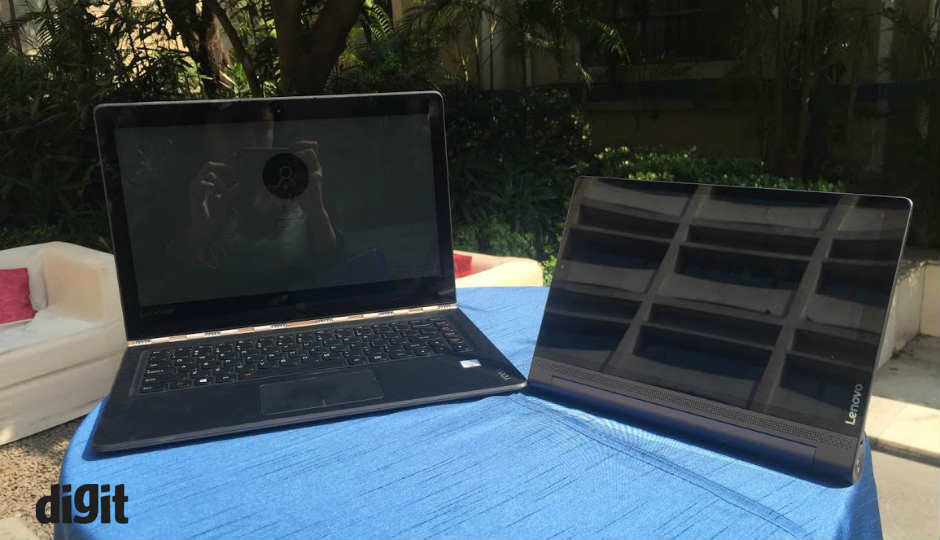 Today, Lenovo announced the Yoga 900 and the Yoga Tab 3 Pro for the Indian market. While the Lenovo Yoga 900 is a 2-in-1 hybrid laptop, the Yoga Tab 3 Pro is an Android powered 10 inch tablet. Digit was present at the launch event and here are our initial thoughts on both products.

Lenovo Yoga 900
With the Yoga 900 laptop, it seems that Lenovo is still committed to its Yoga series of laptops. Just like the Yoga 3 Pro, the Yoga 900 is all about the looks and design. The Yoga 900 has a premium feel to it and its Champagne Gold colour adds to its upmarket looks. Don't be fooled though, the price of the Yoga 900 also keeps with it's high-end design philosophy. The Yoga 900 will set you back a whopping Rs. 1,22,000. This off-the-charts pricing is what could set Lenovo back when compared to the Rs. 1,52,000 MacBook Pro and the Rs.1,15,999 Asus ZenBook Pro UX501, both with higher specifications.

Design
There's no doubt that the Yoga 900 looks pretty fancy. The best part about this hybrid's design is its watchband hinge. The watchband hinge is made up of more than 800 individual pieces and helps lock the laptop in various positions such as - tent, laptop, stand and tablet. The watchband’s hold on a particular position is quite stiff and makes for easy maneuverability of the device. The keypad is smooth and makes barely any sound while typing. The trackpad on the Yoga 900 is similar to that of the Yoga 3 Pro. It is completely black with a chrome trim encasing it. The division on the trackpad is marked with a subtle red line, also inspired from previous Yoga laptops. 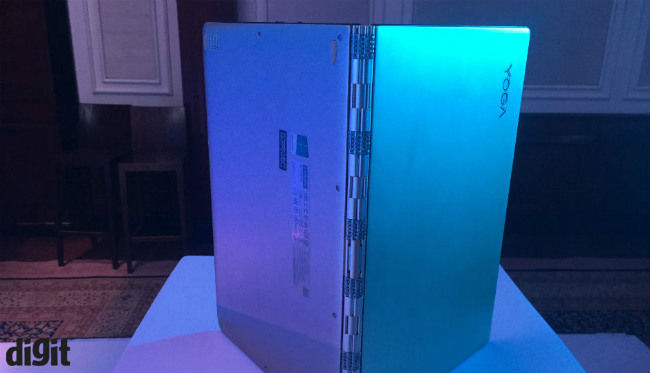 Display
The Lenovo Yoga 900 has a 13.3 inch display with a 3200x1800 QHD resolution. Lenovo has used an IPS panel for on the hybrid and display is quite vibrant. Colour reproduction is good and images are sharp. 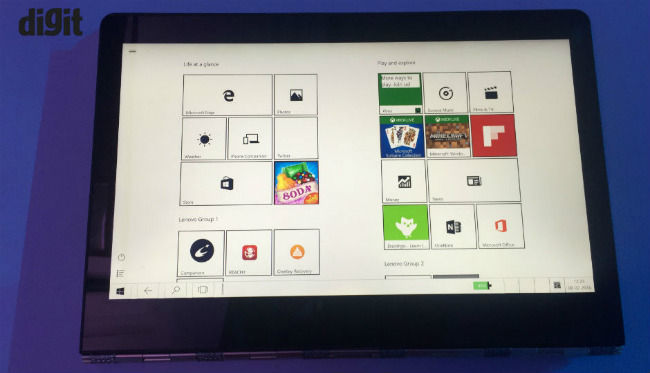 Functionality
In terms of usage, Lenovo is clearly targeting the power user with the Yoga 900. The laptop-tablet hybrid runs on Intel's latest Core i7 CPU which is a big update over the Core M processor that powered the Yoga 3 Pro. It also has 16GB of RAM and 512GB SSD. These specs are more than enough for any home or office user. Navigating multiple windows and desktop apps was also pretty seamless when tried at the launch event. The Yoga 900 houses 4 USB ports out of which one is a USB Type C port. This is definitely enough number of USB ports for a laptop-tablet hybrid.
All-in-all the Lenovo Yoga 900 seems like a powerful machine and has a lot to offer. The price is a mood dampener. How the price affects the Yoga 900 in the market is something we will address in our review.

Lenovo Yoga Tab 3 Pro
The Lenovo Tab 3 pro is 10.1 inch tablet with a 180 degree rotatable stand. You can even hang the tablet on your shower hook for your viewing pleasure. Before you call a water alert, let me tell you that the Tab 3 Pro is splash proof and unless you drown it in a bucket of water, this one is a cool customer. The USP of the Lenovo Tab 3 Pro is its projector though. Let's first start with the design. 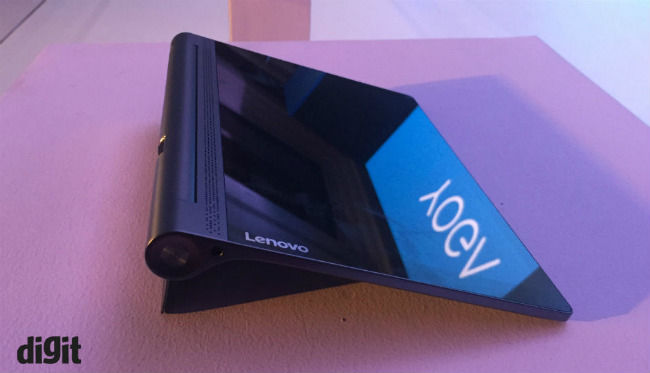 Design
As soon as you pick up the Tab 3 Pro, you know it's designed to look luxurious. The tablet has a strong aluminium body and the back is covered with faux leather, giving it a good grip. The Yoga Tab 3 Pro's  rotatable hinge is also made of aluminium and houses the projector on it. This makes it easy to adjust the tablet while projecting the screen on a white wall. It was a smart move by Lenovo to place the projector on top of the rotatable hinge as it provides enough play to project the screen in different angles. The hinge also acts as a stand for the Yoga Tab 3 Pro. So, when you are not using the projector, you can make the tablet stand vertically and use it while reading or working.

Projection
The projector on the Yoga Tab 3 Pro gives an output of up to 50 lumen and can project an image of up to 70 inches on any wall or ceiling. When I tested the projector at the event, the first thing I realised is that one needs a completely dark room to see the projection clearly. A little light leak fades the projected image, but it performs decently in darkness. The projector works best when the device is placed close to the surface of projection, rather than at a distance. 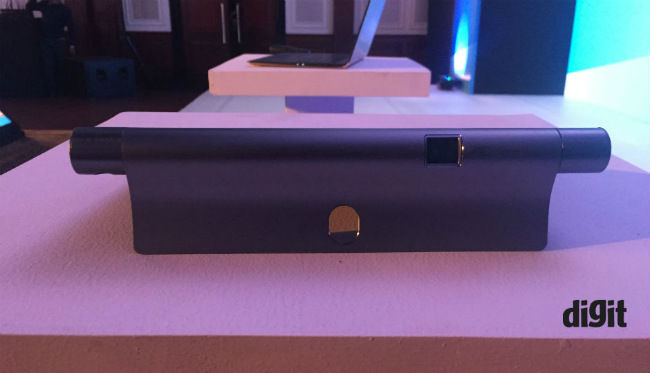 Battery
With a QHD display and a an in-house projector, one would think that this device guzzles battery. But, that's not the case, or so says Lenovo. The Tab 3 Pro has a 10,200 mAh battery, which the company claims can last for 18 hours of usage and 49 days on standby. Now that is impressive but obviously up for debate. The Tab 3 Pro also comes with a USB 'On the Go' power bank, allowing users to charge other devices as well.

Other Specs
The Yoga Tab 3 Pro runs on Android OS v5.1. It has four front facing JBL speakers with Dolby Atmos sound. Unfortunately we could not test the tablet for audio at the event. For connectivity, the Yoga Tab 3 Pro has Bluetooth and WiFi support. The memory of the tablet is expandable up to 128GB, using a micro-SD slot. In terms of camera, the tablet has a 13MP primary camera and a 5MP front facing camera. Priced at Rs. 39,990 the Lenovo Yoga Tab 3 Pro is a good tablet option and the projector definitely gives it an edge over other Android tablets.