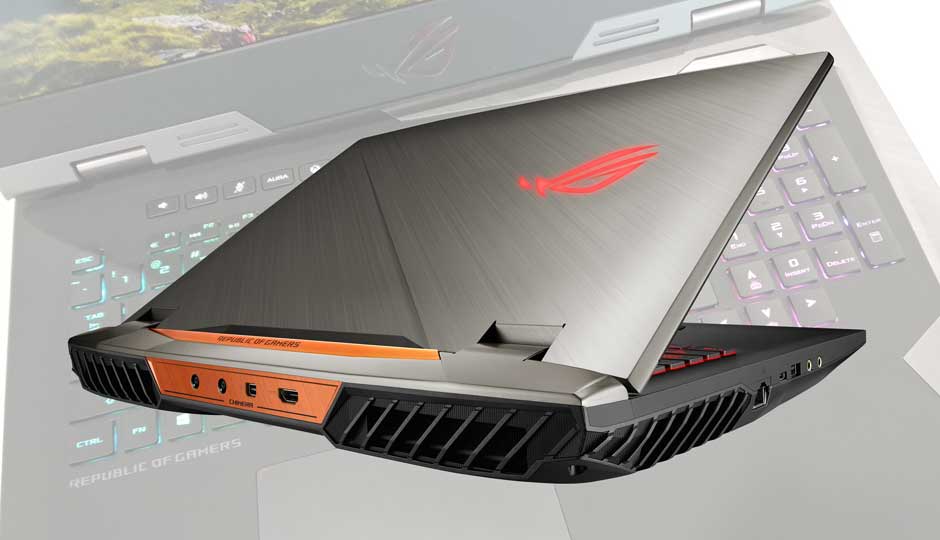 The ASUS ROG G703 would be the second laptop featuring the Intel Core i9-8950HK to hit the Indian market when it goes on sale over the next couple of weeks. The laptop was previously teased when the G701 was unveiled in India late last year. Simply put, the G703 is practically one of the best gaming laptops from ASUS aside from the flagship liquid-cooled GX800. Aside from the overclocked 6-core/12-thread Core i9-8950HK, the ASUS ROG G703 sports a GTX 1080 clocked at 1974 MHz and 64 GB of DDR4 RAM. The price? Rs.4,99,990 only. Yeah, the G703 isn’t economically priced at all, and you’ll see why.

The ROG series which is the more enthusiast gaming sub-brand of ASUS has multiple grades with the ROG Muscle being the top-most and that’s where the G703 sits. There are certain peculiarities about this high-end grade that are instantly identifiable with the G703 and the first would be the metallic chassis. It’s got a stamped edge cutting into the backside at a 45 degree angle and the entire face sports a brushed look. There’s also the ROG eagle eye logo which glows in red when the laptop is crunching away. 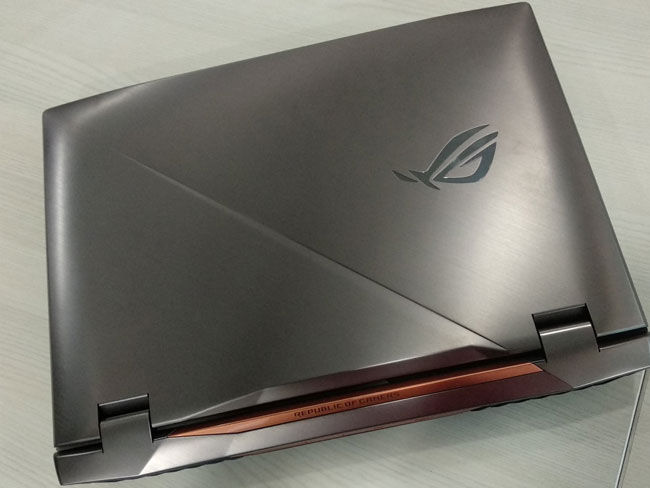 Then comes the rear of the laptop which has two cooling exhaust vents on either side with the display output and power input sandwiched between them. The rear-facing vents have always been preferred over the side facing ones or even the downward facing vents. As for the display cables, it has a mini-DP 1.4 and an HDMI 2.0 out right next to the two power adapters. Yes, you heard that right, the Core i9-8950HK and the GTX 1080 by no means shy away from chugging away a few hundred watts.

And lastly, you have the underside of the G703 which has a fairly easy to remove hatch for you to upgrade the RAM or if you simply want to perform some routine maintenance. 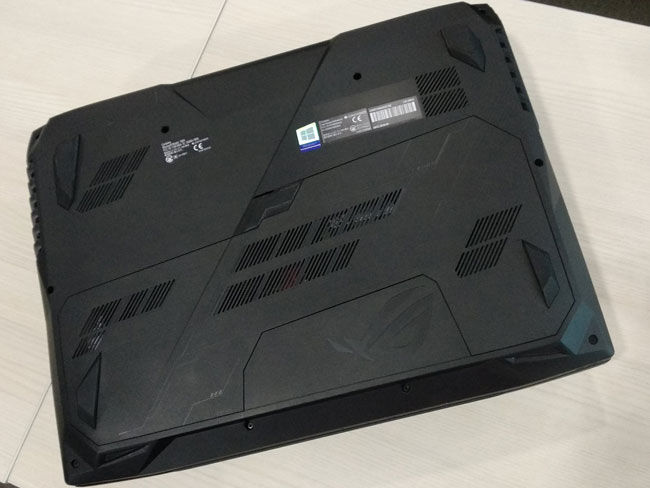 Forget that last bit about upgrading the RAM. The G703 comes with 64 GB of DDR4 RAM, so you’re good to go for a long, long time. 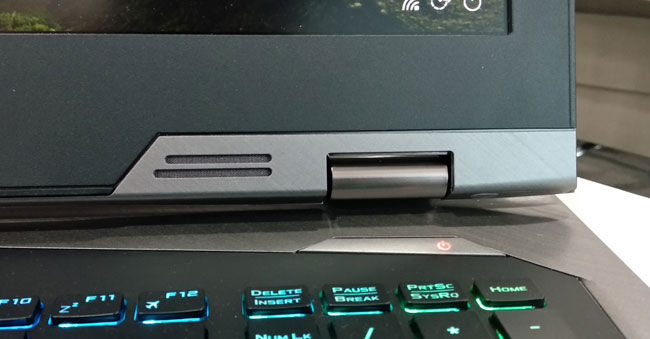 Being such a feature laden laptop, the G703 is not at all light and because of that, all movable parts need to be well capable of handling the extra weight. The hinges of the G703 seem to be very much capable of that.

The G703 sports 3x USB 3.1 Gen 2 Type-A ports and 1x USB 3.1 Gen 2 Type-C port which also doubles up as a Thunderbolt 3.0 port. There’s also a fully fledged Gigabit Ethernet port, an SD card reader, a Kensington lock slot and two 3.5mm audio I/O. We’d like to point out that the audio jacks are gold plated on the G703.

Unfortunately, the vents you see here are also exhaust vents. So while you are gaming with a mouse, you will have the G703 billowing hot exhaust onto your hand.

Not much has been said about the G703’s audio capabilities. Aside from the fact that it sports two down and front firing speakers on either side, we don’t know a lot of the laptop’s audio prowess.

It does ship with Sonic Studio III which is ASUS audio processing software, however, we don’t see any of the features like MSI’s Nahimic suite with the ASUS laptops.

ASUS has a fairly common keyboard and touchpad setup with per-key RGB customisation. At the top of the keyboard lie 7 hotkeys for volume control, mic on/off, ASUS Gaming Centre, AURA lighting, XBOX app, and to switch the webcam on/off. 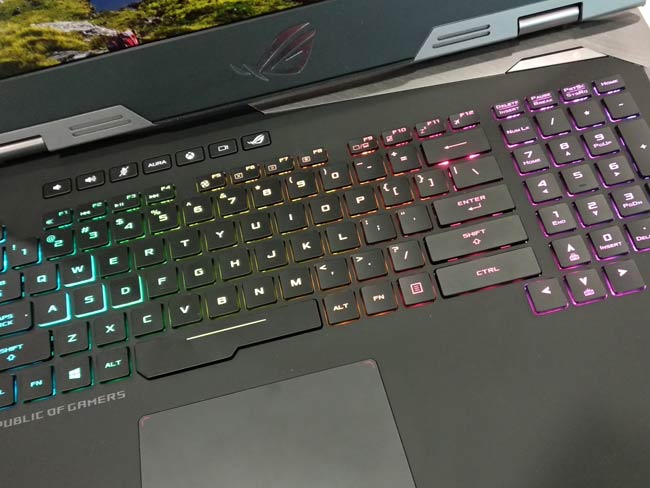 The competition has mechanical keys in this price range along with game-specific lighting patterns. We’ve been told by ASUS that these features are currently being looked into. In case you’re wondering about the key travel, then it stands at 2.5mm which is slightly lower than the 3mm travel which the MSI GT75 boasts of. Key travel is a subjective metric that comes down to the individual user, so pick what you like. Lastly, the surface of the keyboard and the palmrest have a thin rubberised texture.

Laptop gamers have always wanted desktop level features. While that’s not at all entirely possible, it’s nice to see laptop manufacturers pushing the envelope in some manner. The G703 comes with a 17.3-inch 144 Hz G-Sync panel with up to 130% sRGB colour gamut. As for all the other hardware that the G703 brings with it, you have a few things that stand out and they’re the cooling system, the battery capacity and the Hyper Drive storage technology.

The Hyper Drive technology is perhaps the most interesting of these three. Given that NVMe SSDs have really hit the limit of the DMI bus, you really can’t achieve supernormal speeds the usual way when all the storage was routed via the PCH. So with the G703, ASUS has routed two of the NVMe SSD’s PCIe lanes directly from the CPU. That’s what Hyper Drive is all about. As a result, the triple SSD RAID 0 setup on the G703 can provide up to 8.7 GBps read speeds.

We’ll be getting our hands on the G703 later this month and we’re most excited to check out the Core i9 CPU and the Hyper Drive technology. While, the law of diminishing returns always applies to such enthusiast products, it’s always wonderful to see brands coming out with innovative approaches to get more out of existing hardware.