Robotics has come a long way, but where is that robot butler? 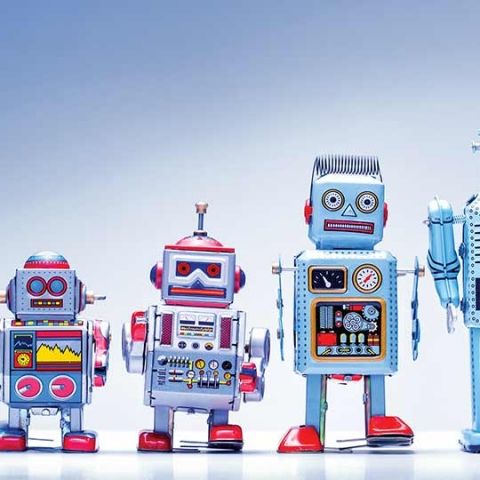 A factory in Dongguan, China – the one belonging to Changying Precision Technology – replaced 90% of its 600 strong human workforces with robots – and soon saw a 250% rise in productivity and a 20% drop in defects. It is undeniable that we have arrived at an age where robots taking our jobs is not longer the stuff of conjecture.

To begin with, let’s clear up any confusion about what constitutes a robot versus a mechanical machine. While according to some definitions early computing machines, as well as mechanical clocks, would technically be robots, what we are looking at here are humanoid machines – the kind that mimics humans in purpose and shape. 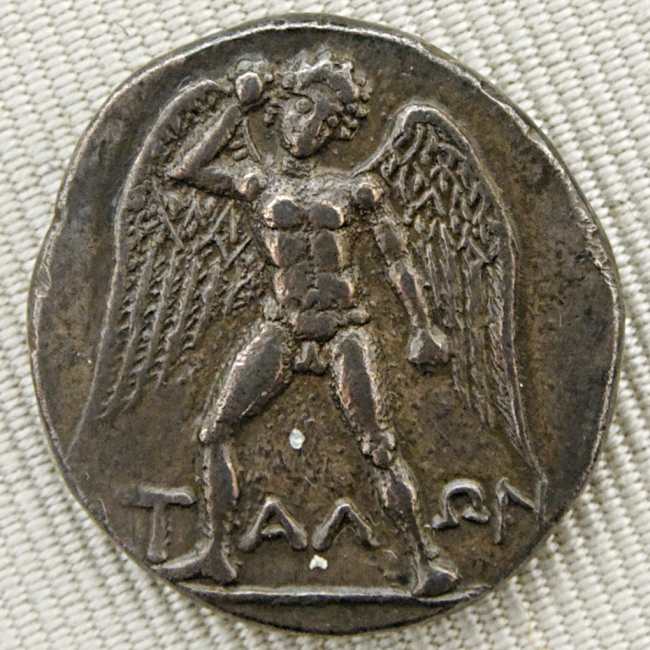 Talos represented on an ancient coin

In various cultures, some artificial creations have always been brought into the world by beings of mythical powers – Clay Golems, Talos from Greek mythology and more. Some of the earliest stories (since there’s barely any physical evidence to credibility) and concepts date back to as far as the 4th century BC when Greek Mathematician Archytas of Tarentum proposed the design of a steam-propelled bird. But one of the first documented designs of a humanoid robot came much later in Da Vinci’s notebooks from the year 1495. The designs, most likely based on his anatomical research for the Vitruvian man, were intricate and detailed a mechanical knight that could sit up, wave its arms and move its head and jaw. 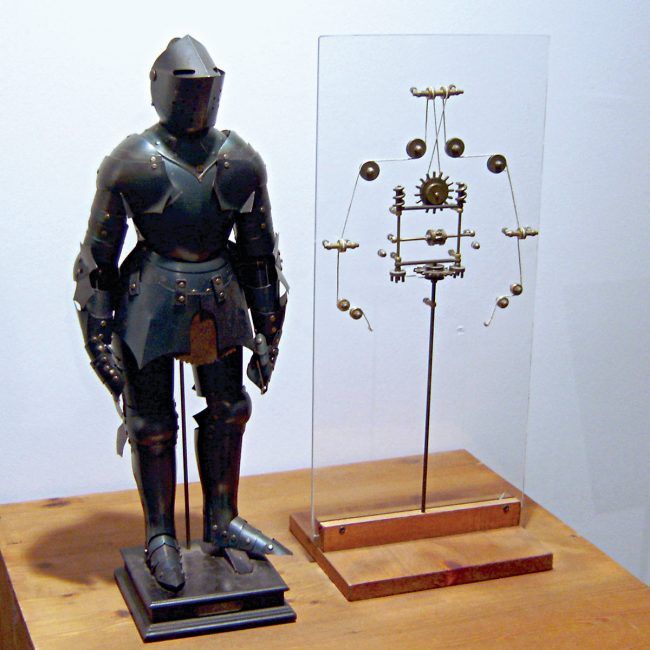 Da Vinci’s design was way ahead of its time

The 18th century saw a lot of activity in the field of robotics. Automatons in this century were actually capable of acting, drawing, flying and even playing music – but mostly as toys or means of entertainment for the rich. Jacques de Vaucanson was a robotics pioneer of this time who designed and constructed multiple iconic automatons of that era. In 1737, Vaucanson built the Flute player, The Tambourine Player and his most famous work, the Digesting Duck. This bird automaton had 400 moving parts in each wing (an astonishing number for that time) and it could actually flap its wings, consume water and grains and then defecate. This was achieved through a hidden compartment of fake ‘digested food’. Such frauds were commonplace around the time as the onlookers mainly viewed automatons as means to entertain.

The 19th century saw multiple areas of progress that made advanced robotics (compared to the impractical automatons of the 18th century) a greater possibility. The automated Jacquard loom of 1801 and Babbage’s Difference Engine in 1822 played key roles. In terms of theory, it was in 1847 that George Boole represented logic in a mathematical form understandable to machines, which is what we know as Boolean Algebra. Another significant development was the patenting of a remote controlled robot boat in 1898 by Nikola Tesla, which would form the basis of the wireless control that we see in space exploration robots even today.

It wasn’t until the 20th century that the word ‘Robot’ was coined. In the 1921 play R.U.R (Rossum’s Universal Robots), writer Karel Capek used the word to denote automatons in the story. He credits the word to his brother, who derived it from the Czech word ‘robota’ that means servitude (kind of setting the intent right there). But a major, and perhaps the most significant, cultural phenomenon when it comes robotics was Asimov’s science fiction writing in the 1940s. In fact, the word ‘robotics’ is said to have come into common parlance due to his work. Most importantly, he conceived the three laws of robotics:

In 1928, Japan’s first humanoid robot, Gakutensoku, was designed and built by Makoto Nishimura, a biologist. It could perform some gestures like move its head and hand and also change its expression. Another significant humanoid built during this time was Elektro, a robot built by the Westinghouse Electric Corporation somewhere between 1937 and 1938. This one could walk by voice command, speak about 700 words (using a record player), smoke cigarettes, blow balloons, and just like the Gakutensoku, move his head and arms.

Around the 1950s, Alan Turing and his contemporaries did some remarkable work in computing and artificial intelligence. In 1950, Alan Turing devised the Turing test as a means to determine whether or not a machine has the ability to think for itself.

The first industrial robot, the Unimate (for ‘universal automation’) was created by George Devol in 1954 and patented in 1961. It was actually used by General Motors in a plant in Trenton, New Jersey to lift hot pieces of die-cast metal and stack them up. Unimation, the world’s first robot manufacturing company – founded by Joseph F. Engelberger and George Devol in 1956 – is popularly regarded as the foundation of modern robotics. 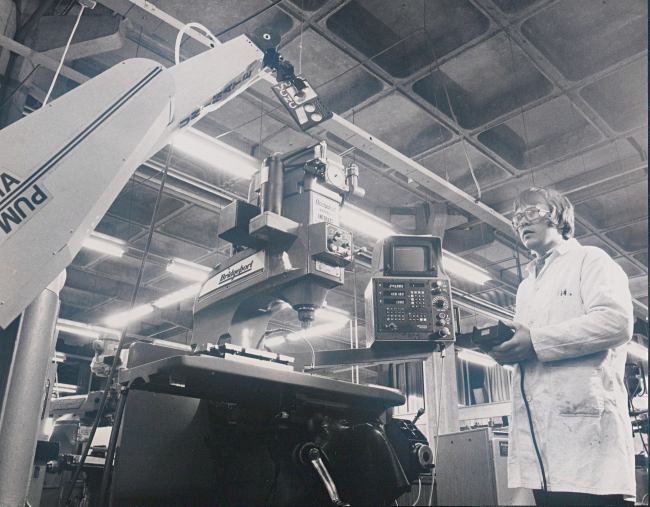 The 1960s saw a lot of interest in robotics as an academic pursuit. Also, interest in Artificial Intelligence was rife around this time with AI research labs being opened at M.I.T., Stanford Research Institute (SRI), Stanford University, and the University of Edinburgh.

The world was also introduced to ELIZA and HAL. The first mobile robot that could comprehend and reason about its surroundings was also built this decade by SRI (now SRI International). Shakey, which is what the robot was named, navigated using a combination of multiple sensor inputs, including TV cameras, laser rangefinders, and “bump sensors”.

In the 1970’s, manufacturing processes were increasingly using robotic arms to increase efficiency or get dangerous things done. Both the PUMA (Programmable Universal Manipulation Arms) and the SCARA (Selective Compliant Articulated Robot Arm) were developed and extensively used in the 1970s. 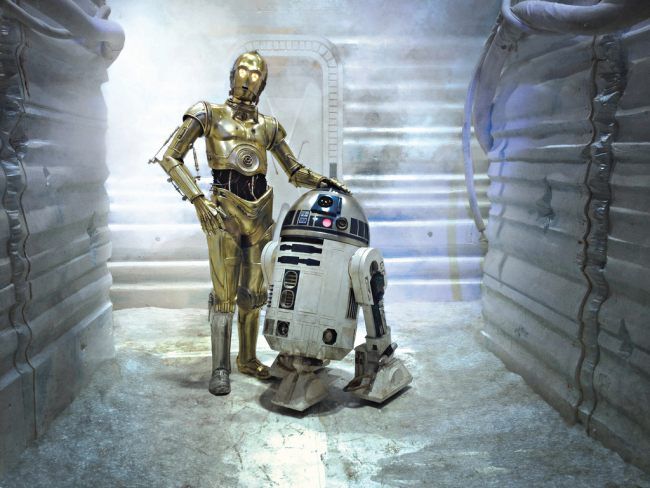 But something significant happened in the world of robotics in this decade that would inspire scientist and engineers for decades to come – Star Wars was released. The movie, set in a universe where humans and robots coexisted in perfect harmony, inspired many to look at the next level of human-like robots.

From Humanoid to humanlike

In 1986, Honda began a research project to develop robots that could interact with humans. Their goal was a robot that “should coexist and cooperate with human beings, by doing what a person cannot do and by cultivating a new dimension in mobility to ultimately benefit society.” Although this project would take almost a decade to bear fruit, its results would be highly significant in the coming years.

In 1989, a research paper changed the direction of rover research. So far, robots were being used for space exploration, but the direction of design to build one big multipurpose robot instead of multiple small ones, was advocated by this paper; it influenced the way we designed rovers.
The 90s were full of robotic advancements, as if decades of research and study was finally culminating into results. For example, the 8 legged walking robot Dante explored Mt. Erebus in Antarctica. Dante II, a more robust successor, subsequently explored Mt. Spurr in Alaska in 2004. The Cyberknife, a stereotactic radiosurgery robot released in 1994, could treat tumours non-invasively with an accuracy that was comparable to human doctors. 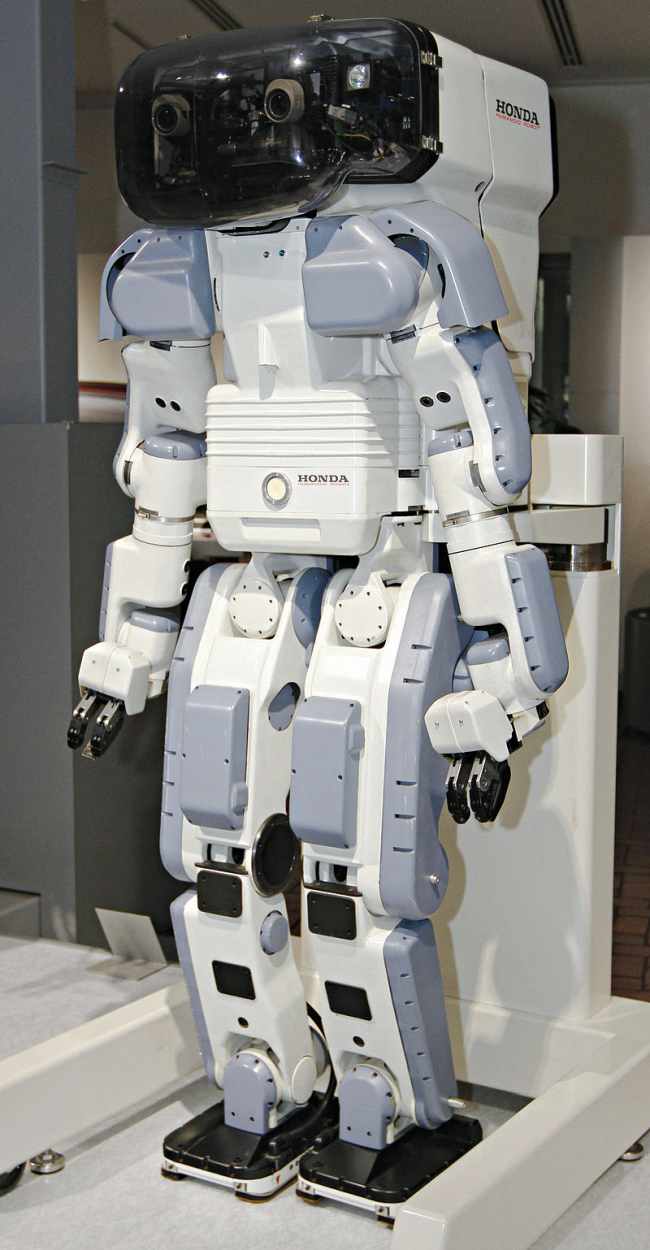 Honda’s P2 would go on to be further refined

After almost a decade of research, Honda’s P2, and then P3 were ready to be publicly demonstrated. The former was the first self-regulating bipedal robot while the latter was Honda’s first completely autonomous robot.

The dawn of the new millennium saw robotics reach everyday life and people like never before. The ASIMO, the result of Honda’s decade and a half worth of robotics research, was introduced to the world and it was the most advanced robot of its kind at the time.

Weighing only 54kgs, ASIMO (Advanced Step in Innovative Mobility) was capable of running, walking, communication with humans, facial and environmental recognition, voice and posture recognition, and interacting with its environment. Estimates in the same year showed that more than 700,000 robots were being used for industrial purposes around the world – more than half of them in Japan. 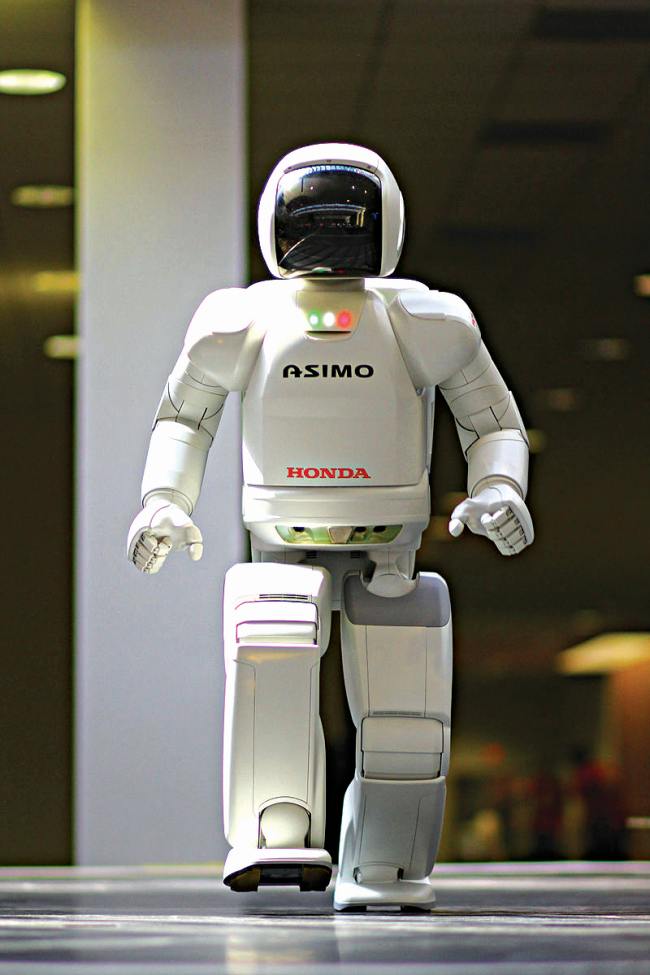 The AIBO also gained popularity around this time. Artificial Intelligence Robot, or AIBO, was a robotic dog capable of interacting with humans. While intended as a consumer market entertainment device, the AIBO had several remarkable capabilities like responding to over 100 voice commands and talking in a tonal language.

Behold those who inherit the earth

To most of us, that statement might appear too exaggerated. While we are not claiming otherwise, it would be great if you could look around you and realise how much the world is already dependent on robots. These robots, by the way, are more sophisticated than they have ever been. The Roomba automatic vacuum cleaner has sold millions of units, showing how willing we are to welcome domestic robotic technology into our homes. 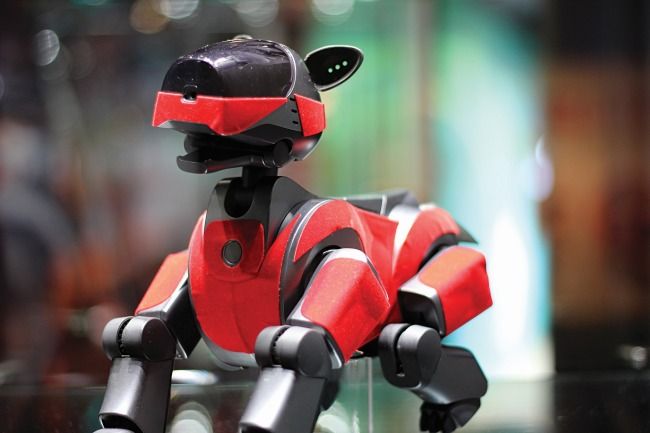 On the other side of the power spectrum, there are drones that can navigate the globe by themselves and perform dangerous aerial strikes while the human controller is seated in the safety of their office (or even asleep). On the other hand, artificial intelligence programs have beaten the world’s best at their own games and even learnt how to bluff.

This article was first published in March 2017 issue of Digit magazine. To read Digit's articles first, subscribe here or download the Digit e-magazine app for Android and iOS. You could also buy Digit's previous issues here.

WhatsApp Pink scam: Malicious link gives complete control of your phone to attackers
Samsung Odyssey Neo G9 could be the industry's first curved-display Mini-LED gaming monitor
Amazon reportedly destroys millions of perfectly fine gadgets every year
Vishal Dhupar of NVidia on how technology will improve gaming performance
Madhav Sheth of Realme India gives his insights on what technology could look like in the next 20 years
Advertisements