Just as Nokia announces the first of its Symbian^3 devices, they have released a new SDK which allows Qt developers to write applications for Symbian, Maemo, and future Meego devices.

With future versions of Symbian OS, Nokia will be switching to Qt as the platform for developing applications for Nokia phones. To this end, Symbian^4 will feature a UI built on Qt, and so will Meego. Instead of rewriting the wheel, Nokia has wisely utilized an existing tried and tested UI framework.

By supporting Qt on Nokia phones, Nokia has extended Qt’s reach to an impressive range of operating systems and devices.  Qt can now be used to target Windows, MacOS, Linux, Embedded Linux versions such as Meege and Maemo, and Symbian. The Qt SDK also includes APIs for device-centric features such as sending messages, or geolocation. With a unified API for all Symbian and Meego devices, applications developer will be able to reuse a lot more of their code across devices whcih support the Qt platform.

The new Nokia Qt SDK beta, which is available for Windows, and Linux finally lets developers target devices from the Qt Creator IDE. Qt Creator has also been much empowered, and now supports testing applications written for devices using a simulator. 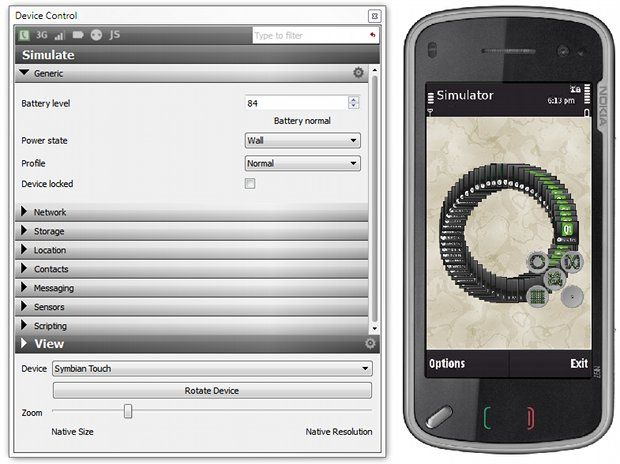 The bundled simulator allows one to simulate device functions, and test how the application responds to changing network conditions and battery levels. One can also use script the process of sending the device data, using JavaScript. The simulator can simulate touch or non touch Symbian devices and Maemo / Meego devices.

The latest release uses Qt 4.7 the upcoming version of Qt which boasts of some impressive new features, including Qt Quick. Qt Quick (Qt User Interface Creation Kit) is a new technology in Qt 4.7 which uses  QML a new declarative UI development language.  QML allows Qt Applications to be written using a simple declarative language combined with JavaScript. Such applications while being written in JavaScript and QML, can still be combined and controlled with C code. The new Qt Creator 2.0 tech preview -- included with the Nokia Qt SDK -- also includes a graphical UI design mode for the new QML markup.

You can find out more about  Nokia Qt SDK click here.
For information about Qt 4.7 and QtCreator 2.0 click here.