From servers to sensors: The engine powering IoT 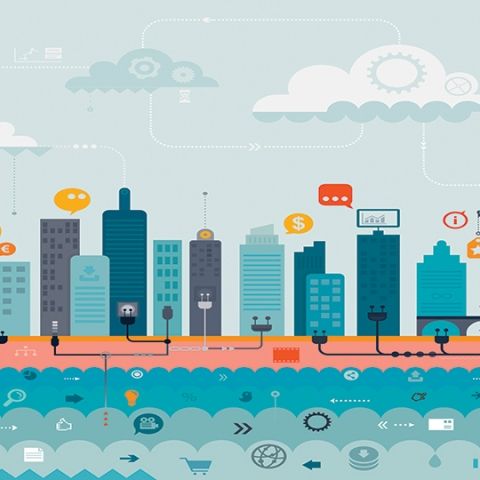 Since CES in January earlier this year, the technology world has been bombarded with a magical marketing term – “Internet of Things”, a promise of a whole new era of intelligent automation thanks to the overbearing power of digitisation.

The Internet of Things may feel like a concept taken right out of the sci-fi manual, given the scope of its magnificence. It’s a nevertheless equally daunting dream to realise in its full-scale implementation. Yet, from all the evidence we saw at a recent media tour in Taiwan – an international hub of hardware manufacturing in the information and communication technology space – IoT (Internet of Things) isn’t just a figment of some technology marketer’s wild imagination. Global companies like Acer, Advantech, ARM and MediaTek, among others, are working hard to ensure products and services are launched in the coming months that will help propel the dream of IoT towards fruition. Let’s look at some of the things they’re doing.

Smart everything: Acer and Advantech
Digit readers need no introduction to Acer, of course – we’ve been writing about and reviewing its products for many a year now. However, the Taiwanese company’s cloud services and solutions may not be as well known on hither shores. Apart from being a hardware and electronics company, Acer has been making steady in-roads into the cloud computing vertical to ensure that it’s poised to offer unique solutions in the IoT industry as well.

Acer likes to refer to IoT as the “Internet of Beings” and believes that this concept heralds the beginning of a new computing and communications era. Sensors won’t just be dumb entities capturing data, but will also have an element of computing embedded within them (either locally or through the cloud). How is the company planning to attack the market? By enabling customers to implement smart IoT solutions through its ‘aBeing’ line-up of products, which will launch later this year. The Acer aBeing One PC is aimed at developers who want to develop their own IoT solutions. It’s designed to connect to smarthome and wearable products, and act as a hub that analyses incoming data from the devices. The ‘abPBX Plus’ is an advanced version of the aBeing One, offering high-end professional server grade communication services. 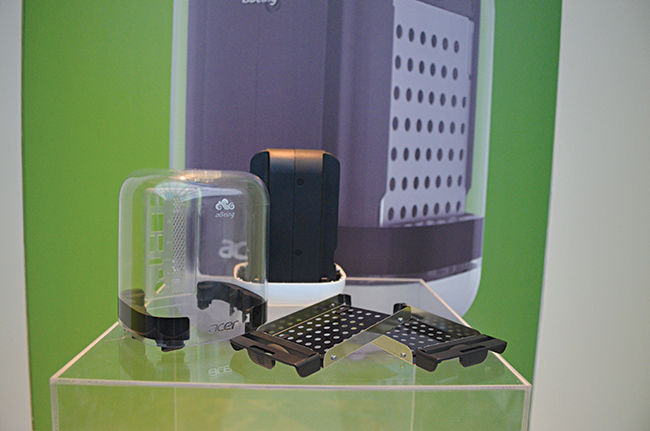 Acer aBeing One for IoT

A key component propelling IoT’s advancement in the near future is Acer’s‘ Open Platform Ecosystem’, for which it has partnered with a range of companies to provide important turnkey solutions. For e.g. Acer’s Open Platform incorporates ‘Snappy Ubuntu Core’ by Canonical to showcase a smart home surveillance solution. If an intruder were to break in, the motion-triggered camera would store video locally on an aBeing One, alert the homeowner on their smartphone and wait for further instructions. Similarly, Acer’s BYOC hybrid cloud can be used for global fleet management (for a radio cab service, for example) through its mobile sensor hub devkit or smart healthcare solutions to be provided in a hospital scenario – all powered by the aBeing One at some level.

At Acer’s headquarters, we’re privy to smart thermostats, cloud connected coffee makers, educational IoT devkits and syncing services that the company is working on – look at this video. It won’t be an understatement to say that Acer is investing heavily on cloud services and devices like the aBeing One to ensure that the recipe for IoT can come together effortlessly.

Another interesting Taiwanese company doing great work in the IoT domain is Advantech, whose motto is “Enabling an intelligent planet.” It’s a world leader in manufacturing and designing integrated embedded computing solutions that enable an enhanced level of automation through digitisation – at factories, on the road, in the building premises, at home, everywhere. And some of the demos we got to check out were actually quite amazing.

The company is known for building built-in self-sensing technology for IoT applications. It does this by manufacturing Box PCs that self-manage, self-protect and communicate seamlessly. Some of the things that Advantech specialises in are intelligent transportation, smart retail, intelligent buildings, intelligent agriculture, and digital logistics and fleet management.

As a case study, Advantech highlighted its smart gantry solution implemented in Taiwan. It digitised 319 gantries, monitoring 6 million vehicles and carrying out 14 million transactions per day – completely removing the need for toll booths, as found on Indian roads. What makes this IoT solution so great? Due to seamless traffic movement, 22.5 million commuters’ minutes were saved every day, leading to 60 million litres of reduced fuel consumption per year and a whopping 138,000 tonne of reduced carbon emissions per year. 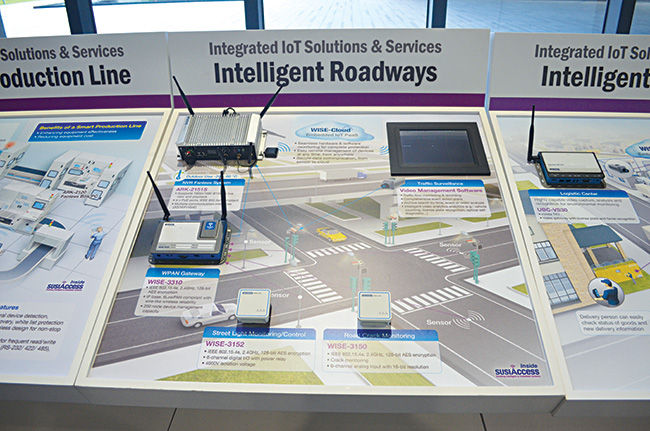 Demonstrating its smart buildings IoT solution is Advantech’s headquarters in Taipei, Taiwan, a living proof of concept. It has 20-metre high plant installations that are watered and tracked automatically without any human intervention. On its roof, sits one of the largest privately owned solar panel installations in Taiwan, powering the building’s electricity needs. It has touch-enabled smart displays (running on Windows 7 no less) throughout the building, allowing residents and visitors to interact with it and get information. Conference rooms with internet-connected motion sensors let you know if a room is occupied by automatically turning red or green on its outside.

Whether it be automatic fare collection on the road, smart parking spaces, intelligent buildings or the next wave of smart factories that will help us reduce the adverse impact of technology on our ecology, Advantech’s innovations are ensuring IoT isn’t just a pipe dream anymore. It’s more than real.

Chip-level innovations: ARM and MediaTek
As you probably know, ARM chips are based on “reduced instruction set computing” or “RISC”. This provides ARM devices with significant gains in the area of power-efficient computing – of paramount importance to sensor end-points, especially ones that need to last quite long (sometimes several years) with really low-powered batteries. And here’s how ARM will ensure that IoT becomes an end-to-end reality.

In ARM’s family of processors, the Cortex-M is what it thinks will drive the IoT trend across the globe, since by its very definition the Cortex-M family of processors are used primarily for computing tasks involving smallest footprint and lowest power consumption. Things like heart pacemakers, smart street lights, smart washing machines, and wearable devices, among other things, are powered largely by ARM’s Cortex-M processors. Whether it’s deeply embedded wearable devices like the Nike Smart Shoe or Fitbit Flex or smartwatches like Moto 360, right from measuring 90 nanometres to lasting for up to 15 years, ARM Cortex-M processors are at the heart of the wearable devices phenomenon.

But that’s not enough, is it? ARM has two initiatives specifically targeting the IoT wave in the form of ‘ARM Cordio Radio IP’ and ‘ARM mbed OS’.

Connectivity is the name of the game, and ARM is trying to push the envelope on this by trying to reinvent radio communication standard at the silicon level. The Cordio Radio IP series includes integrated, ultra-low power CMOS radio IP cores along with link layer firmware, stack and profiles supporting ‘Bluetooth Smart’ – a new standard that sets the stage for a variety of new applications needing ultra-low power wireless connectivity at low cost. This technology is particularly suitable for devices that need to transfer small amounts of data within a relatively short range (2.4GHz frequency, throughput < 305 kbps, range <50 m). Like existing Bluetooth technology, Bluetooth low energy is universal, interoperable and license-free. Why is this necessary? Because traditional Bluetooth and wireless data standards are too taxing in terms of data packet and power consumption, both of which are managed more efficiently in Cordio Radio IP.

ARM’s mbed platform enables device manufacturers and developers to optimally configure chip-level processes. With a chip-level, local, configurable mbed OS (to collect little data) and Internet-connected mbed device server (to analyse big data), IoT application or services can be powered end-to-end. Currently, ARM has over 1 lakh mbed developers, more than 12,000 published programs and libraries, and 45+ platform implementations. With all these aggressive plans, ARM’s surely looking forward to making greater inroads into the IoT space in collaboration with partners designing innovative digital solutions for customer needs very soon. And to think that ARM’s RISC chips are poised to be one of the biggest enablers of IoT, in all its various complexities, isn’t without its sense of irony.

Another company betting big on IoT is MediaTek – we all love it in India primarily for launching a wave of high-performance yet inexpensive handsets in the market. Here’s what it’s doing to further the IoT industry as a whole.

MediaTek offers complete hardware and software to provide an integrated application platform for developers to build next-generation IoT solutions. Its advanced SoCs are high on performance without compromising on battery life and are geared for multimedia, and its chipsets support a number of communication and connectivity protocols. MediaTek firmly believes that by 2017, 50 percent of IoT solutions will be developed by startups that are less than three years old. To power these startups and solutions and to widen their appeal to potential customers, MediaTek is carrying out many activities through its ‘Labs’ initiative.

MediaTek Labs supports developers through device creation, app development, and services rollout – all for free. The online website of MediaTek Labs also helps out developers in terms of SDKs, HDKs, access to technical documents, solutions catalogue and a service called ‘Labs Partner Connect’ – and through this, MediaTek targets DIYers and makers as well as professional developers trying to create constantly connected smart home or office solutions. 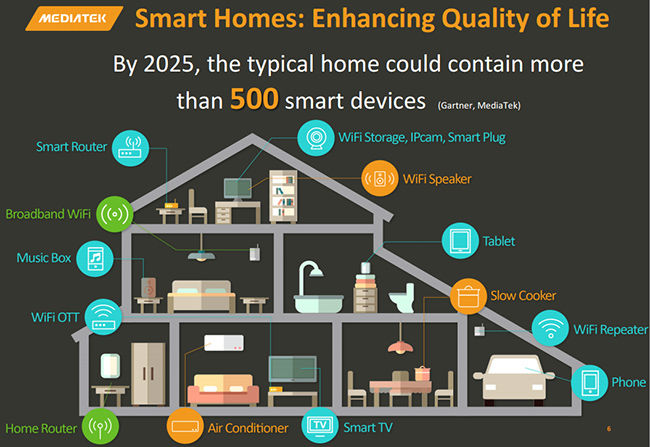 Well, so far we’ve learned what a great opportunity IoT presents in the scheme of all things digital. But no one has spoken about its challenges. At MediaTek, we received an answer to this question as well. According to MediaTek, the IoT space faces three critical challenges – interoperability, security and business model. Devices capable of multiple standards are few and far in between, and frankly there are too many independent, proprietary ecosystems, which need to come together and talk to each other to exchange data at a very basic level. Software and hardware companies need to tackle the problem of security together and not in isolation, according to MediaTek, if IoT as an ecosystem needs to grow stronger in the coming future. And one of the most basic challenges for IoT is business models not fine-tuned to capitalise on the opportunity it presents. For evolving business models, there’s a need for cross-industry cooperation for common learning and revenue sharing.

With just 150 employees, including factory workers on the assembly line, Holux is a small yet innovative company doing great things on IoT. It’s focusing on two verticals – smart homes and wearables. It claims to have made the world’s first smartwatch with driving fatigue detection algorithm (recently patented in the US), and has a whole host of temperature, humidity and air quality sensors meant for use in home and industrial applications. Taiwan Sakura is making smart home devices such as smart stove, smart water heater, smart kitchen and more. Mobiletron has been a leader in automotive electronics for over 30 years, and it has made great advancements in fully robotic, remote-controlled factory floors, hardware fabrication and fleet control services. It recently got an Indian transport giant to collaborate with it for Internet-controlled and monitored transport fleet.