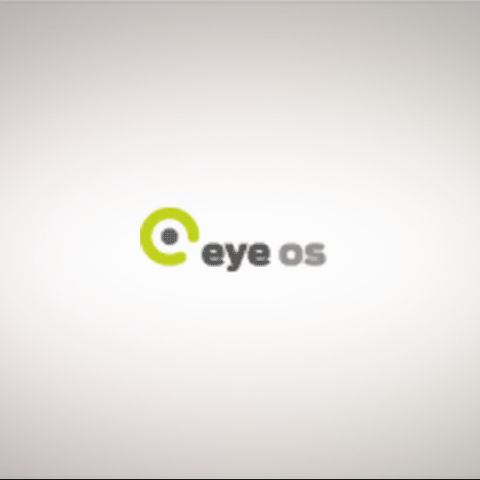 As Operating systems have evolved, they have begun to abstract more and more of the hardware's complexities from the end user. While setting up a soundcard in DOS would require knowledge of ports numbers and soundcard models, today even some of the most obscure of devices can automatically be detected and installed with minimal user intervention.

At the same time, the variety in hardware and hardware platforms has increased exponentially. Today's computers are not just desktops and laptops, but also smartphones, tablets, netbooks, televisions and more. What if there was a way that the operating system could be abstracted from the hardware it runs on?

eyeOS takes the concept of operating systems a step further and abstracts away even the hardware of the computer. As long as you have access to a device that complies with web standards — whatever it may be, a smartphone, tablet, notebook or supercomputer — eyeOS will run on it. It doesn't matter whether you are accessing your computer from home, a friend's computer or even a cybercafe, your data and applications will be accessible. 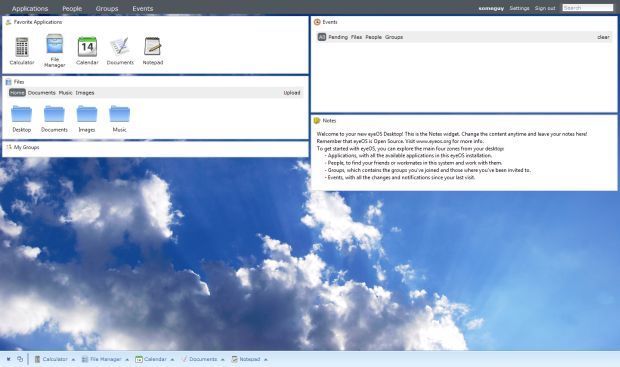 eyeOS is one of the few free and open source web operating systems out there. Being open source, it is available for anyone to download and install on their own server, however for those who don't want to be bothered with such things, it is also available as a paid service. For simply trying it out they provide a trial server where one can create a free account with a 1GB storage quota.

Since eyeOS is a server application it doesn't have a simple click to install setup. You need to be running a server with a particular kind of configuration before eyeOS will run. Fortunately the requirements are pretty standard, something that most server setups will automatically include.

eyeOS requires that you run the Apache server, with PHP support and a MySQL server. Due to its extensive features, eyeOS has some special requirements such as the OpenOffice daemon which is used for converting documents. All its requirements are open source software, so its not as much of a problem unless you have shared hosting or free hosting and cannot install the applications of your choice. However eyeOS will function without these, but with a few features missing.

eyeOS tries to mimic the desktop operating system paradigm quite closely without being an exact copy. The latest eyeOS 2.2 features a desktop with multiple movable panels. To any Gnome user (Ubuntu users for example), the layout will look familiar. A panel at the top of the screen has, at its rightmost, an Applications menu.

This application menu is quite different from what you see in Gnome. The "Applications" menu link actually drops down a panel with all your installed applications and an option to add more applications.

For the most part you can get right down to business. There is nothing to learn, files and applications open when you click on them, menus work as expected, applications have the kind of chrome you expect from any OS. It not only looks like a desktop OS, it works pretty much as you would expect a desktop OS to work too. This means there is not much of a learning curve when transitioning from desktop to the cloud. Applications come within their own window, which can be moved, closed, resized, just like you'd expect. 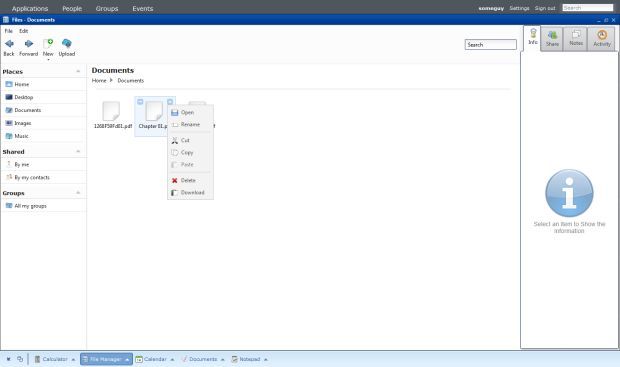 The eyeOS File manager with the standard context menu

As expected of any operating system, you can install and uninstall applications, and applications can manage their own filetypes. Any files which eyeOS cant handle, will simply start downloading when you launch them, so you can handle them with native applications on the system.

If you have your applications and files already on the cloud, you will not need to download them to work on them, they will open in the included applications right in the browser. Since the operating system itself is a cloud applications, it can offer the benefits we have come to associate with internet applications, such as live collaboration and social networking, at a whole new scale.

The latest v2 series of eyeOS comes with quite a few applications to start with, including a document editor with live collaboration support, a calendar application, a text editor, a file manager, an image viewer, and much more. 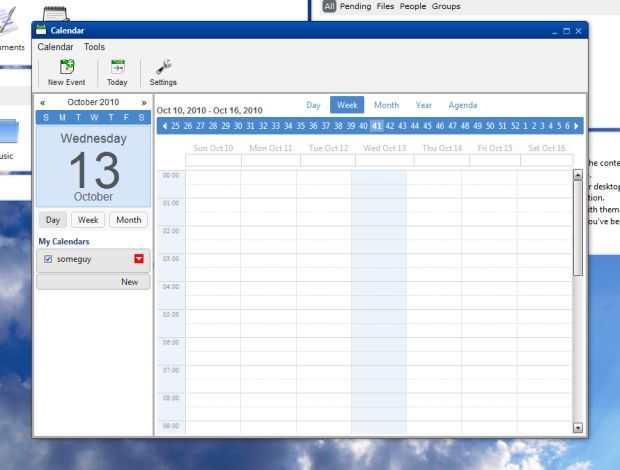 The eyeOS document editor with the "Socialbar" sidebar

Unfortunately currently the latest version of eyeOS, which is v 2.2 is not very stable and a lot of the functionality doesn't work. However the older 1.9 series of the OS works well and has been available for two years now. The older version does not feature live collaboration and has lesser social networking support, but is a solid OS with ten times as many applications available.

You can think of eyeOS as the ultimate RIA, and RIA which can possibly incorporate any other RIA a simple application. eyeOS supports applications, and if a few of the current RIAs can be modified to run as applications on eyeOS rather than on their own servers, eyeOS's appeal will increase even more.

If you have a number of computers on a LAN connection, eyeOS can serve as a perfect work environment. With all your data stored on a central server, and your account accessible from anywhere within the office, you need not worry about which computer you do your work on as everything is stored under your name at the central repository. File sharing in eyeOS allows you to give access to your data to specific groups, such that multiple people can have access.

While it is unlikely that you will be able to abandon your desktop OS entirely in favor of something like eyeOS any time soon, it does manage to provide some of the flexibility that you just cannot get using a conventional operating system.

You can get many of the features of eyeOS through individual applications online, online storage with Google Docs / Dropbox / Box.net, each offering its own different file-management solution; document editing with Zoho, and Google Docs; online calender with Google Calender, Calenderfly etc. Being able to access your data from anywhere is already something you can get with these services, however storing your data AND your applications online, and furthermore, running applications using your online data is something that is only possible using an online operating system. Also, since this application will be running on your own server, your data is safe withing your hands, and need only stay within the internal office network.

Since the only requirement to run eyeOS is a web browser, a client machine can have any OS platform, Mac OS, Linux or Windows, or hardware platform, ppc, x86, x86_64, ARM. Unlike memory heavy OSs such as Windows 7, (or even many Linux distos for that matter), such a client could have the simplest hardware with Chrome OS or a similar light OS installed.

We are already seeing web services integrating with desktop applications, and with each other. It is now possible to upload images to a service such as Picasa, and edit them online using Picnik. As the web services evolve, what we are beginning to see is a web operating environment of sorts. eyeOS just makes this transitions official, and lets you get an early taste of the future of the internet.