Cryptocurrencies in Union Budget 2018: Legal or not? Experts answer 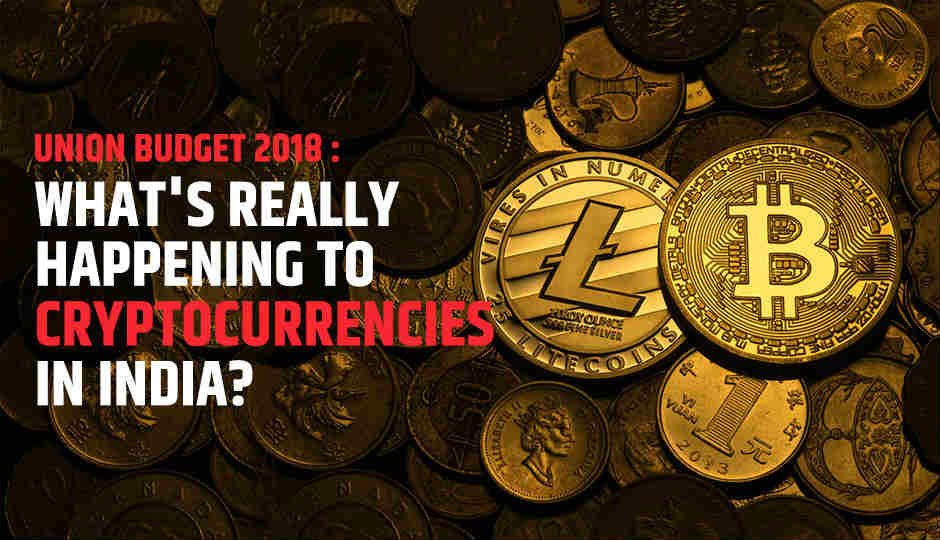 The announcement regarding Cryptocurrencies in yesterday’s presentation of the Union Budget 2018 has resulted in many misleading reports that the digital currency is now ‘illegal’ in India, spooking investors all around the world. The language used by the Finance Minister in the Budget reads as follows -

"The Government does not consider crypto-currencies legal tender or coin and will take all measures to eliminate use of these cryptoassets in financing illegitimate activities or as part of the payment system. 21 The Government will explore use of block chain technology proactively for ushering in digital economy."

The statement has led to speculation that the government is actively cracking down on cryptocurrencies and might consider banning them in the future altogether. Various stakeholders in the matter have been struggling to decipher the cryptic statement made by the FM, which also sparked a fall in prices of Cryptocurrencies like Bitcoins. Bitcoin prices fell by 6% internationally as people gave way to fear, expecting the impending death of the digital currency in the country.

But, what does the government’s new stance on cryptocurrencies really mean? Is is completely banned in the country? Is it still tradable? Can one use it to make legal purchases? Should one continue to invest in it? Here’s what experts have to say.

What are Cryptocurrency stakeholders saying?

According to the Blockchain and Cryptocurrency Committee of IAMAI (Internet and Mobile Association of India), the fact that cryptocurrencies are not legal tender has been a position taken by almost all governments around the world.

“It is our understanding that only currency notes and coins are legal tender. That doesn't make any comment on the ‘illegality’ of other assets. It must be emphasized that gold, stocks, bonds, and other such assets are also not ‘legal tender’. To extrapolate that to mean that such assets are ‘illegal’ is irresponsible,” explains Ajeet Khurana, Head, Blockchain and Cryptocurrency Committee (BACC) of IAMAI.

BACC also added that there is a need to regulate digital currencies in India and that they already maintain a no-compromise approach to KYC (know your customer) and AML (anti money laundering) processes.

What is the legal perspective?

From a legal point of view, leading FinTech practitioners believe not much has changed as far as the legality of cryptocurrencies in India is concerned. Multiple lawyers contacted by us are of the view that when the FM says, “The Government does not consider cryptocurrencies legal tender or coin,” it means that any dispute arising from a cryptocurrency transaction cannot be resolved through the existing legal system in the country.

“There’s probably been a little bit of an overreaction overall. I don’t think anything new has been said in the Budget. There’s already been a couple of circulars from the RBI where the RBI has stated that they have not planted any kind of sanctions as far as cryptocurrencies are concerned. They do not constitute as legal tender as far as Indian laws and regulations are concerned. That, to me, is a statement that’s stating the obvious. It means that you cannot be compelled to accept a payment in cryptocurrency nor can you compel somebody else to accept it,” explains Ashwin Ramanathan, Senior Partner, AZB & Partners.

So from the legal perspective, the position that cryptocurrencies find themselves in today, is the same that they held in the country before. However, the open acknowledgement from the government has played its part in planting doubts and making investors nervous.

Ramanathan adds, “Even before yesterday, I think it was an open question about how the government would treat cryptocurrencies. As per RBI, people who deal in cryptocurrencies, do so at their own risk. What the RBI is saying is that don’t look to us or the government to protect you from these sort of cases. You are on your own. What might now happen is more requests to the government to clarify its position, because I don’t think this is a clear position.”

How can the government clarify its stance on cryptocurrencies?

In a post-budget interview, Finance Minister Arun Jaitley did confirm that the government is discouraging the use of cryptocurrencies currently and that an official govt committee is exploring how to best take the next steps. This atleast hints at the fact that there will be further steps taken by the government in regulating the exchange of cryptocurrencies in India.

“Rather than restricting cryptocurrencies, they can be regulated to prevent any adverse impact and risks while exploring blockchain side by side and leverage opportunities which are available with new concepts and technologies that they bring to the table,” says D.D. Mishra, Research Director at Gartner.

Most notable crypto exchanges already require the completion of KYC before the purchase and sale of digital currency. However, the govt’s discouraging push will definitely impact their business in the short term. There is also a glaring need to enhance security practices around cryptocurrency transactions, especially after the recent hack of Japanese cryptocurrency exchange Coincheck, which resulted in a loss of $500 million worth of NEM coins.

“I think what might happen is it (the budget announcement) might accelerate conversation around the RBI and government needing to take some sort of a view, just because there’s going to be very many questions around this thing,” predicts Ramanathan.

As of now, just like Monopoly money cannot be used to make legitimate purchases anywhere in the world, neither can Bitcoin, Ethereum, Ripple, or any other digital currency, in India.