Can India ever reach Top 5 in the Olympics? 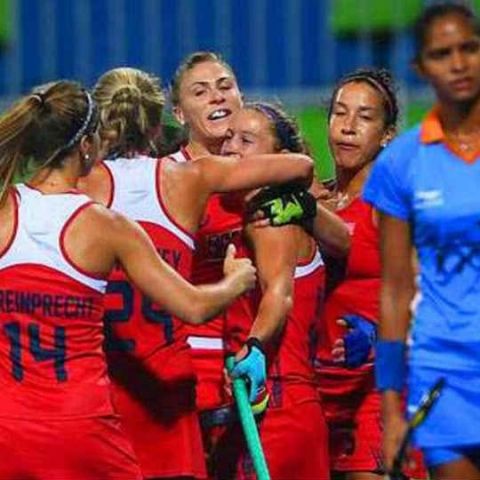 We believe we can, but the answer might not be what you think it is.

No matter what we like to believe about ourselves, when it comes to sports other than cricket, we are very much at a third-world level in terms of facilities and training. While everyone has an opinion-and-a-half about what Indian sports lacks, I certainly believe that no one should question the passion and hunger our sportspeople exhibit, despite all the odds stacked against them. 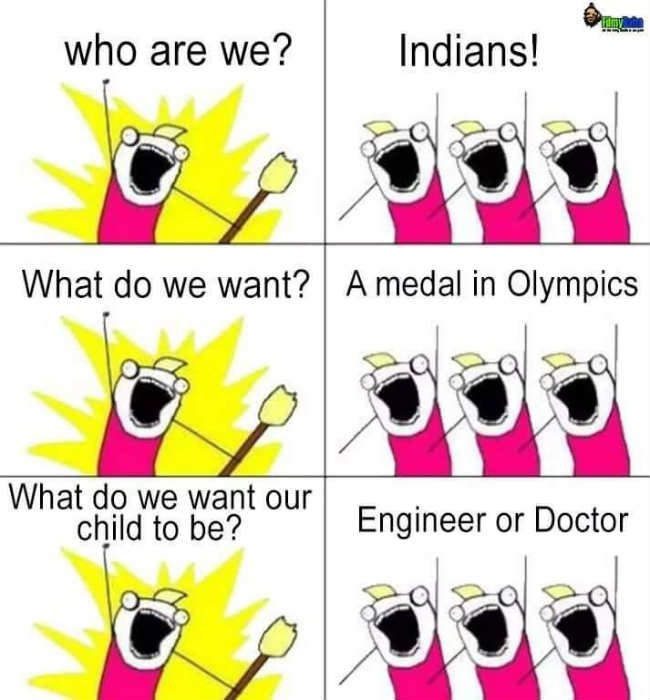 So is it even possible at all for Team India to rise above all our problems and start performing the way you would expect a country with 1.4 billion people to do? Can we ever punch at the level that’s expected of us? I think we can.

The story so far

In pretty much every Olympics, the US dominates. I think there’s a reason why the US, China and the UK are always up there in the medals tally, and it’s not as simple an answer as “sporting facilities”.

At this point, you’re likely to point to a myriad other articles that lament our lack of facilities and equate it directly to our poor showing, but hear me out.

We certainly need better facilities, better coaches, less politics, more professionalism and fewer “officials” travelling to the games just to party. Of course, we need to treat our athletes better, and make stars out of them instead of just shaking our heads in disappointment at them every four years. We need dieticians, actual doctors, training camps, more grassroot competitions, much more investment from the Government and private industry alike, and basically we need all of those things that so many countries just take for granted. But, then what?

Assume by some miracle that we got all of that over the course of the next four years, do we honestly think we would fare any better than say, Canada, Australia, Japan or France? These countries have had all of these facilities for decades, and they cannot get anywhere close to the US, UK, China or Russia. Even when we consider a per capita medal tally, we come nowhere!

Let’s look closely at the top three. One might be able to make a case of “genetics” playing a role, if we compared the US to China, but we know for sure that we cannot differentiate using genetics when comparing the US and the UK. When it comes to facilities, amount of time and energy invested, nutrition, participation in world events, exposure, grassroot exposure… whatever the parameter you use, you are not going to find a difference that can explain the vast differences in the medal tally between the top three countries, let alone the rest.

One unique feature of the US Olympic Committee (also Australia) is that it is not government-funded. Instead, it relies on donations and sponsors to function, and contrary to what you may think about the US in other aspects, Team USA doesn’t even have the biggest budgets. Government-supported countries such as Canada and the UK spend a ton more than the US does. Plus, if you think only India has a problem with overpaid “officials”, think again. So what really is the secret sauce of continued dominance of the US in the Olympics?

Turns out, the sauce isn’t secret at all. It’s technology, pure and simple. That’s where the US leads the rest of the world by a mile – something that is directly proportional to its lead in Olympic medals.

All of the top American athletes are exposed to cutting edge technology and science that just isn’t available to the rest of the world, because such technology is not commercially sold just yet. From cutting edge research done in university labs across the US to all of the innovation that startups bring, the US has an embarrassment of tech riches to choose from.

We’re not talking just about the use of sports technology during training, because almost all sportspeople from first world countries enjoy that these days. We’re talking cutting edge, spanking new, still-being-researched tech, and of course a vibrant market that rewards technological innovation.

Mounir Zok, Director of Technology and Innovation of US Olympic committee, openly discusses his role in many of his presentation videos that you can easily find on YouTube, or in his podcasts.

In a podcast with Fashion is Your Business, Zok says, “Think of me as the person who sits down everyday with the athletes, sits down everyday with the coaches, who are aiming at getting them (sic) all the medals that we can get at the upcoming Olympic games, and help them understand where technology is heading, where the world is heading and what are some of the questions we need to be asking ourselves so that we can develop a 1% gap with respect to international competition, and then work with the companies who are shaping the planet maybe, to get the job done.”

He later adds, “We’re looking at every technology underneath the sky that can have an impact on performance. We look at functional fabric, smart textiles, wearable technology, injectable technology, the internet of things world, technology that can be embedded in the environments of the athletes, what kind of technology can we have underneath their mattress, on the walls of their bedrooms, what can we put in velodrome, what can we put in a training gym, and then we go to the soft side of technology, so we’re talking about data analytics, artificial intelligence... I want to say what puts team USA apart probably from the rest of the world is the fact that we spend lots and lots and lots of time trying to determine what the question is that we’re after. We’re always talking about figuring out the 1% question, and we have to really pinpoint that question (…) Most of our efforts are around determining the problem and then just scan the universe for what can help us answer the question.”

Some of the things that the US Olympic Committee (USOC) works on might sound pretty simple, but they certainly provide the one percent edge that seems to be a buzzword at the USOC. Wearable tech seems to have been the biggest focus for the Americans, and they’ve used it everywhere. It makes sense too, as Zok has pointed out in many lectures. You certainly cannot bring athletes into controlled indoor environments (where the tech usually is) and expect them to perform as they would out on a track, or in a swimming pool. Thanks to wearable devices, the technology is going to the athletes instead. With advanced software coding and sensors everywhere, an American Olympic athlete (and his/her coach) gets almost real-time data and analysis. There’s little guesswork now, which athletes love, because they know almost immediately how something different impacts their performance when they try it.

Boxing is one such example, and in training, US boxers were given near-real-time feedback on their punches – how many punches did a boxer throw, what kind of speed did the punches attain (higher speed punches are harder for an opponent to dodge, for example). Then, of course, there’s the impact of the punch - is the boxer being too predictable by throwing too many of the same punches, or following a pattern that’s easy to identify, and a whole load of other stuff that only loads of data can reveal. All of this is coming soon, courtesy a company called Hykso, and will be available in 2017 for just about any boxer who wants this kind of feedback. Of course, the US boxers have been using it for quite some time already, and that’s a clear advantage no other boxing team in the world had.

If you’re a long distance runner for the US team, not only do you have multiple wearables that monitor everything from your heart rate to the composition of your sweat, but you are also given a pill to swallow that monitors your temperature from the inside!

During training, divers are wearing sensors that tell them all the information that a coach would previously guess, or at best look at in slow motion. Now, sensors pass on data and you are able to tell with unprecedented accuracy how good your takeoff was, how fast were you able to start your maneuvers, what angle you hit the water, etc.

In the thick of things

Obviously, all countries are doing this, or at least trying to. Countries with huge budgets, thanks to government support (such as the UK, China, Canada and Germany), can in fact afford to spend more to get cutting edge technology, but then who do they buy it from? When most of the technology innovation is happening in the US, it stands to reason that well-connected technologists working for the USOC will hear about it first. Plus, there’s always the patriotism of an American company to be considered – they’re obviously going to want to help out their own country.

Let’s face facts. There is only so much training and preparation you can do to a human body. Of course, some athletes – such as Michael Phelps or Usain Bolt – just have bodies that are built for their sport, and they have a generous amount of innate talent to boot, which make them dominate their fields. Such people might be unbeatable even with technology, but for most other athletes, where the difference between a gold medal or no medal can be just fractions of a second, a few centimeters or even a fraction of a point, technology might just be what we need.

This is where I honestly believe that we can gain the most. With promising startups being built on a daily basis now in India, and with them trying to solve a lot of problems that are uniquely Indian, there’s a lot of cutting-edge technology being worked on.

We are going to need a US-style silicon valley coming-together-of-minds if we want to have a prayer of getting more medals in the Tokyo 2020 games, and I don’t see any reason why it can’t be done. Startups are obviously going to want to put some of their technology on showcase, and if it can help an Indian athlete win a medal at the Olympics, there’s going to be huge publicity in the offing – given how scarce they’re becoming for us.

The good old Indian knack of jugaad might also prove to be invaluable, once we start looking at this as a technology problem, instead of giving up on it as something unfixable. Jugaad is important, because we may not be the world leaders in innovation, but we are certainly up there when it comes to innovating on a tight budget. It might help stop the Indian sports federation from being run like a government body, and more like a technology company with CEOs instead of ministers, but that’s opening a whole new can of worms...

Whichever way you look at it, I think only by taking lessons from the technology world can Indian sports lift itself out of the quicksand it seems to be perpetually stuck in.