Build it, bring it: Interview with Nick Earle, SVP, Hyperloop One 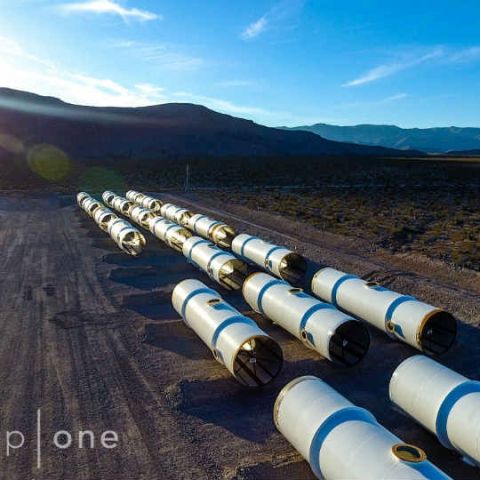 You can’t travel the world on a PowerPoint Deck, says Nick Earle, SVP, Hyperloop One, who was in India announcing the company’s intentions here.

The “real” Hyperloop company has just landed in India, they said. When Hyperloop One shared its “vision for India” on February 28, Railway Minister Suresh Prabhu, Hyperloop One CEO, Rob Lloyd and others present, painted a rosy picture. However, Hyperloop is a long way away from becoming a reality.

Hyperloop One has almost finished building a test track in the deserts of Nevada right now. The company says it will demonstrate proof of technology in a few months. It claims freight transport on a Hyperloop will start from 2020-21, while it should be ready for passengers by 2021-22.

We spoke to Nick Earle, Senior Vice President, Global Field Operations, Hyperloop One, to understand the technology, the challenges in development and what this technology is all about. Earle said Hyperloop is not “a luxury toy for rich people”. Read the full interview below. 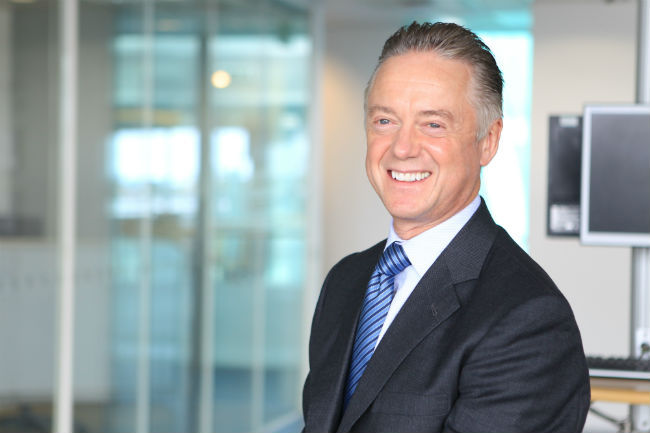 We just talked about connecting a billion people, but the Hyperloop can take only about 28 people at a time, right? What’s the possibility of scaling this?

Now, if you have a network of Hyperloops, you can change the lives of a billion people. If we had a fibre access between here and the building next to us, it wouldn’t change Delhi. However, when the Internet let you reach out to London or anywhere else, it changed people’s lives.

In terms of ridership, we’re looking at anywhere from low-end 6000 passengers per hour to a high-end of 20-25000 per hour. If we need more, you just build another pipe.

When we talk about the feasibility studies being done. A lot of the teams (from the Hyperloop One Global Challenge) here also said their routes will go through these studies. Could you explain what goes into these studies?

To answer that question, you’ve got to define what are we studying. It’s the feasibility of an individual route. First of all, you have to identify a route, you have to look at the ridership, the type or demographic, because the money collected from tickets never pays for any public transportation system worldwide. So, if the tickets don’t pay for it, then something else has to.

That something else is the government top-up (subsidy), which is determined by a standard formula, called the Wider Economic Benefits (WEB) formula. It has to do with which type of people are moving across locations and its benefits on the economy.

In the studies we’ve done so far, our WEB is three-to-four times of any transportation system or metro system. This is because we’re 10-15 times quicker. You may say, ‘well you’re not 10-15 times quicker’, but remember that other means of transport will stop. We only stop at the place you want to get off. High speed rail is high speed when it’s moving, but it’s stationary when it stops. 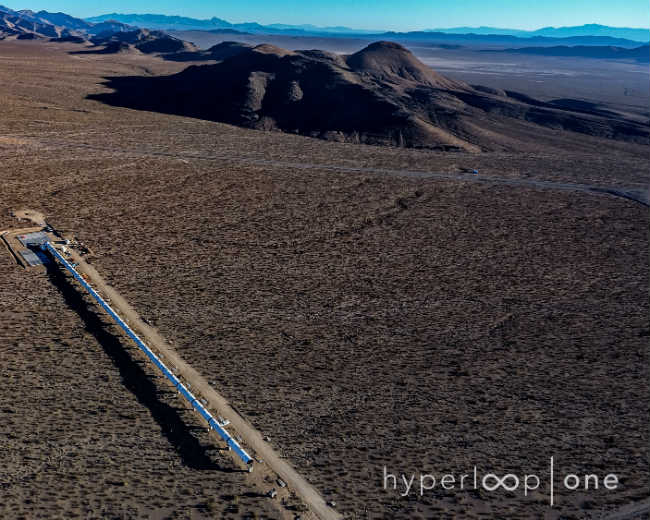 Hyperloop One has extended its test track in Nevada, to 500 metres. Image Credits: Hyperloop One

As a result, we’re 10-15 times faster from a journey point of view. This gives us larger WEB results and hence we can get larger subsidies from the government. The teams here have all done their calculations and shown how and why their routes make sense. The feasibility study, sort of, looks at the first pass of this.

Typically, what it does is, it gets the cost to about 50%, considers what the size of the pod should be etc. If this passes, then it goes to the next stage, where a detailed feasibility study is done. The first study takes about three months, while the second takes about 10 months. In the second study, you sort of design an architect’s plans for the system, from inside the pods, to the tubes, the experience at the stations etc.

After you’ve done that, you now have the intellectual property (IP), which you then sell to companies through an open tender process. So whoever does the design owns the IP. The entities that will create this IP are ourselves, and our partners, including private companies.

The test that we saw in the desert earlier (video below) was obviously a prototype, but have you reached the speeds expected, now, given the photo we saw today (photo above)?

That was a test of the linear motor, but it was steel on steel. We simply wanted to show that we’ve built a whole new motor. We’re now on the seventh generation of that motor, we’ve put the magnetic levitation inside the tube and put the tube caps to suck the air out. That’s where we are at right now. In the next few months, we will run the very first test.

The definition of that test will be that we will put the pod inside the tube, we will accelerate it, it will levitate and accelerate. Then, we turn the power off, we hold it in place with the magnets, it stays in place, doesn’t touch the sides and decelerates, and finally stops (most importantly).

So, no, we haven’t reached the speeds expected, but we will prove that in this test. This will be a public event as well, we will webcast it live. This is the proof of technology, that’s what we mean by the “Kitty Hawk” moment.

That will be the final test for Hyperloop then?

That’s the proof of technology. It’s a Hyperloop, but not one you put passengers on. Once you have the proof of technology, you then spend a few months extending the tubes, so it goes faster. Then we work on bringing costs down, by using different materials etc. and innovating. And then you bring it to a country (probably India) and build a 30-40km version. Here, you need a station, two tubes. It’s still not a 500km version, but it’s a fully working version, because that’s what regulators need. That’s a proof of operation.

How will you deal with specific challenges that countries pose. As in how will you localise Hyperloop?

We’re actually open to localising the design. One of the advantages of being amongst the first countries to adopt this is that we actually can take inputs from these countries. For example, one of the first first regulators we’ve worked with are in Dubai. They’ve set specific requirements in order for us to get safety certifications. So we say, “Oh Ok”, and we start changing the design.

Now, what we don’t want to do is design different Hyperloops for every country. But the first ones we build will actually influence the rest of the world.

We’re creating a configurable system, that can be adapted around the world. We’re also building interoperability standards so different transportation systems can physically connect, and so Hyperloops from different companies can work together.

Note: A study conducted by Hyperloop, in connecting Stockholm to Finland, found that the price of traveling on a Hyperloop was a tenth of airfare for the same distance. The ticket prices were about €28.

About interoperability with other public transport, those, especially in India, are based on primitive technology. How will you get around that?

I wouldn’t say primitive, but earlier technology, yes. We’ve actually talked to Deutsche Bahn about this, at length. The challenge is interoperability wasn’t seen as a key requirement when they were built.

We’re building interoperability from day one, because being from CISCO, we know, CISCO got this right. It wasn’t the only networking company, but it created standards that others operated on. We, as a company have the opportunity to publicise our standards and others will too, while independent bodies will decide the standards as well.

We’ll never be able to interoperate within the software in a Siemens train, but the app that allows you to get the timetable, put your credit card in and book, that can be linked through open APIs. So, an Uber can be linked. We can have interoperability at the application level and with autonomous cars in future, and between different Hyperloop suppliers, because there will be more suppliers in future.

Last question: I went live on Facebook just a while ago and a lot of people asked about the safety mechanisms in such a system. How do we answer that?

That’s a good question. Let me give you three-four answers — the first answer is that none of us know yet, until we do the proof of operations with regulators.

However, let’s look at a few things: People said, your face would peel off on a Hyperloop. I say to you, look, you’ve been on an airplane, it started accelerating, went up in the air (travelled at 600mph), decelerated and stopped. That’s what Hyperloop does, we’re 0.2g, we’re a quarter of the the acceleration of a Tesla in Ludicrous mode. The only difference is we don’t work in the sky, because we bring the low pressure to the ground.

So, first of all, we’re just like an airplane. By the way, we’re a controlled environment, so there’s no turbulence in a Hyperloop, hence you could argue that we’re safer. Secondly, once you’re in it and it’s moving, there’s no electricity. It’s like a spaceship. 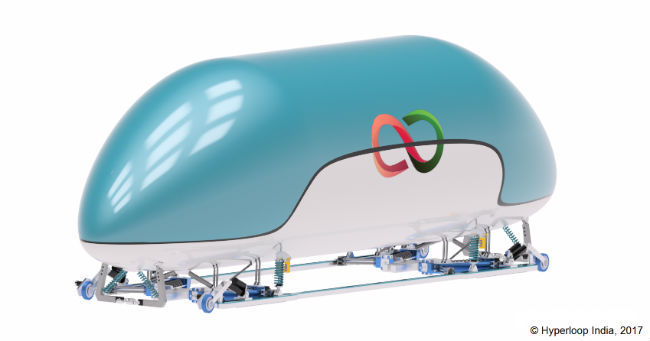 The Orca Pod, a Hyperloop pod prototype proposed by Hyperloop India, one of the teams in SpaceX's Design Challenge

But, what we have to do is show are evacuation procedures, fire procedures, that the pods don’t crash into each other. That’s why the regulatory safety processes are typically 12-18 months long. They’re giving you hundreds of scenarios, saying “what if this happens?”

We’ve got to go through all of these processes and that’s why we’re working with regulators to define the safety case. There isn’t a safety case for the Hyperloop, because it doesn’t exist. Just like you can’t use regular road rules for autonomous cars.

Xiaomi teases new product launch for March 16. What could it be?