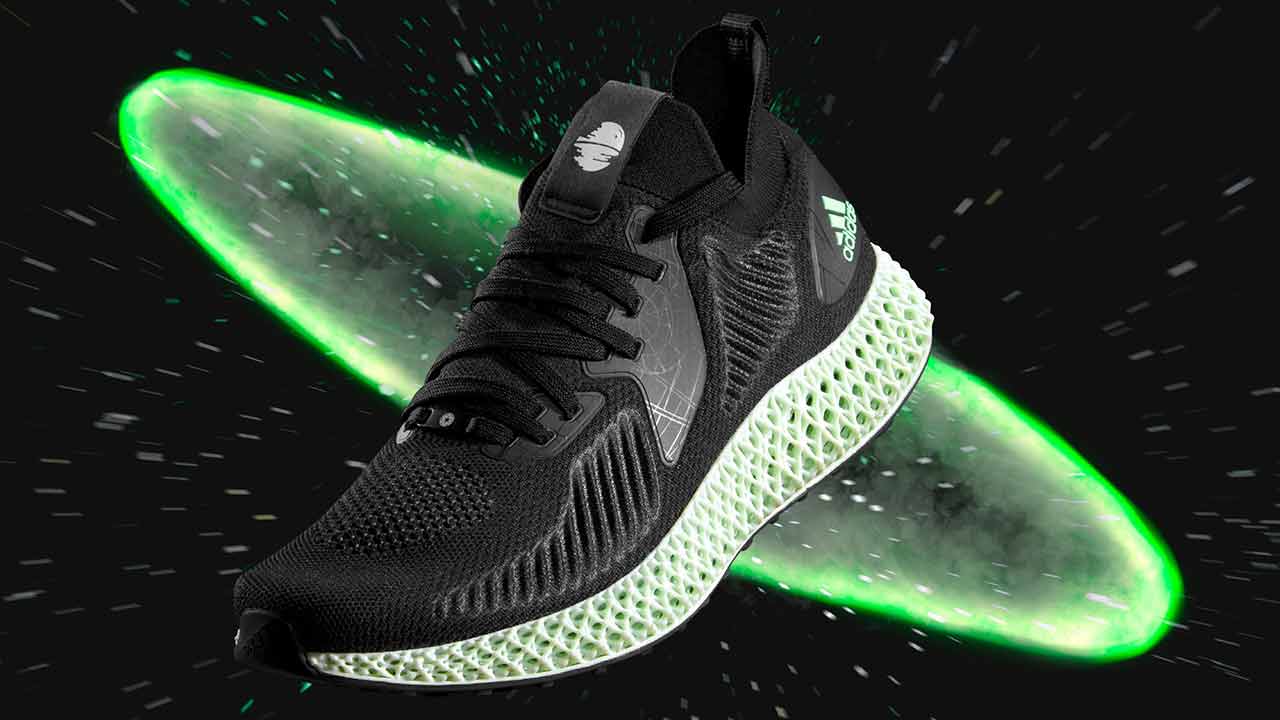 The adidas AlphaEdge 4D looks and feels like it has taken a jump backwards in time. This gear is so futuristic that you can get lost just appreciating all the details, and trying to stare into the depths of the mid sole. The bonus is the Star Wars branding, where every part pays homage to the Death Star and the dark side of the force. There are a bunch of other Lucasfilm sneaker collaborations by adidas, but the AlphaEdge version is easily the best of the lot. Before getting into the quality and comfort, it is good to get an understanding of how these shoes are made. This is because every part uses some technological innovation or other. 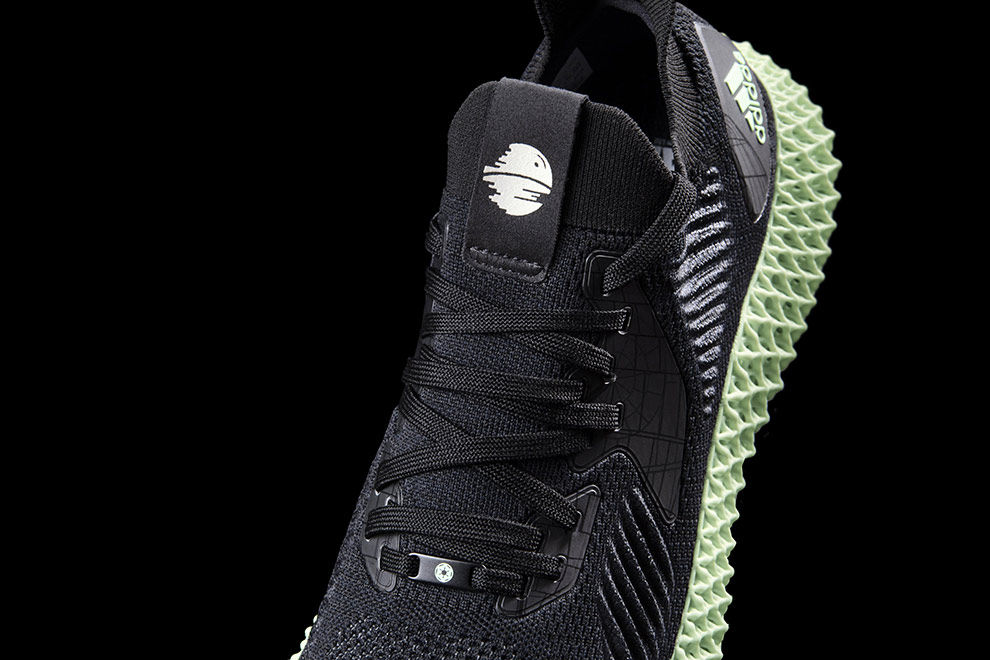 The uppers use Forgefiber tech, which uses Thermoplastic polyurethane (TPU) coated yarn. Each thread is crafted on a millimeter scale, with properties appropriate to where they will appear on the shoe. They are woven in such a way that some parts of the shoes have more structural support than others. The yarn is stitched in different layers and angles throughout the shoe. After the stitching, the TPU coated yarn is heated and compressed, which melds the plastic layer to the fabric. The approach allows a reduction in the amount of thread typically used in the uppers. All of this effort ultimately results in an incredibly lightweight upper, that still manages to maintain its shape, providing structural support just where needed, and is flexible enough for the entire range of movement that the human leg is capable of. The end result are shoes that look awesome, and feel even better.
Then comes the midsole, which is another innovation. The midsoles are manufactured using additive manufacturing through light and oxygen. This is not your typical 3D printing setup, where layers upon layers of material are added. Instead, the whole sole is grown from a liquid resin, using light and oxygen. adidas has collaborated with Carbon to manufacture the midsoles using a process known as Digital Light Synthesis. The midsoles has some parts with additional cushioning, some parts that are more firm, and some parts that are wide and narrow. Getting these properties out of conventional approaches would require the midsole to be manufactured in parts, which would compromise the integrity of the whole thing. The 3D printing approach allows adidas to micromanage the characteristics of the midsole at various points in the shoe, and this has been done using data from runners. You can see this for yourself by observing the shape of the midsole. At the heels, they are thick and wide, with tall and narrow cells. At the arch of the foot, the thickness peaks, and then tapers off towards the toes. The midsole also narrows laterally towards the toes, and the cells become shorter and wider as well. The shoes curve upwards towards the toes, so your toes are slightly in the air. The midsole brings together data science and additive manufacturing into one monolithic component that gives pushback in just the right places when the shoes are in use. 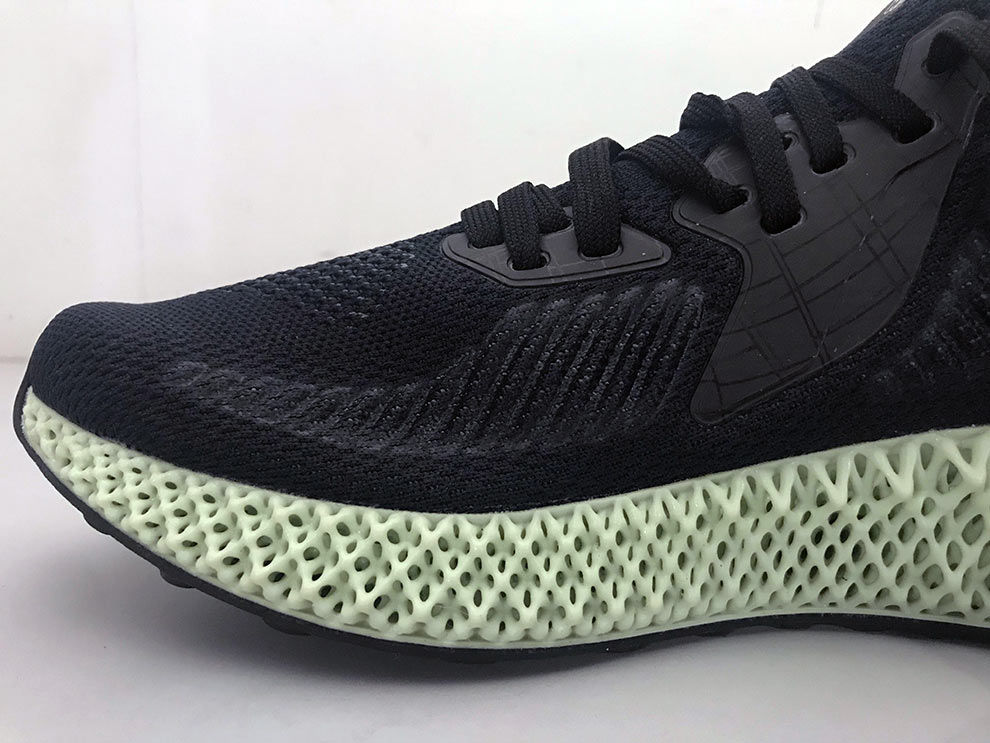 Finally, we come to the soles. These are straight up manufactured by Continental, which manufactures tyres for race cars. The same rubber is used in the sole. There are traction zones, which consists of different sized cells for the perfect grip. Where there is more pressure, like the toes and heels, the cells are larger. Where there is less pressure, such as beneath the arch and the outer edges, the cells are smaller so the same amount of grip can be provided. In the end, these shoes provide excellent grip even if the road is a bit wet. The only conditions where the grip falters just a little bit is when you are trudging through wet and slippery mud, where almost all shoes tend to slip, and these shoes were not meant for such conditions anyway.
Now, each part of the shoe is either straight up inspired by nature in some way, or is engineered in such an organic manner that it feels like something that has evolved, instead of something that has been crafted. This shows not only in the process behind the manufacturing, but the actual decisions made on each and every part of the shoe. The amount of material and structural components used is an informed choice at a millimeter scale. There is a lot of attention to detail to get everything just right, and this shows when you actually use them. 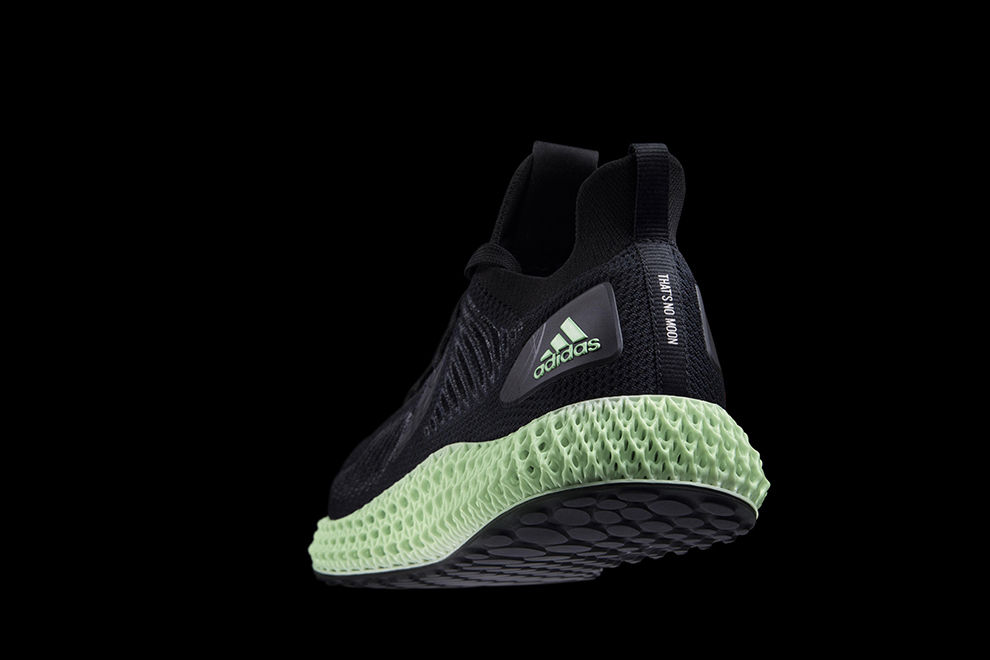 These shoes appear at first to be deceptively simple. There is no differentiated tongue, so you can just slip them on. The most eye catching feature is the midsole, which looks like a bridge built using Goo Balls from World of Goo.
The midsole is a 3D printed lattice structure, and as such looks like that it can acquire a lot of dust and stones. We found out that this was not a cause for concern. The midsole is surprisingly easy to clean, and seems to be hydrophobic. You can just pour water right into it, shake it off, wear the shoes, and you are good to go. The colour did not seem to fade for the few weeks that we had the shoes. They are reflective in the night, which is a great safety feature.
The uppers are black and don’t get dirty easily either, and is resistant to grease. While the shoes do come with cardboard inserts to retain the shapes, we found no deformity after repeated use. There are some irregular edges between the midsole and the upper, where the glue shows, but you really have to be looking very, very closely to find these. We found them on the heels of the shoes, and on one toe tip. These are not more than what can be expected. The gluing between the midsole and the sole is however, seamless. The stitching is really top quality, and we couldn’t find a single bat stitch. The materials are all high quality, and the tongue and pull tabs gamely took all the torture that we gave them. 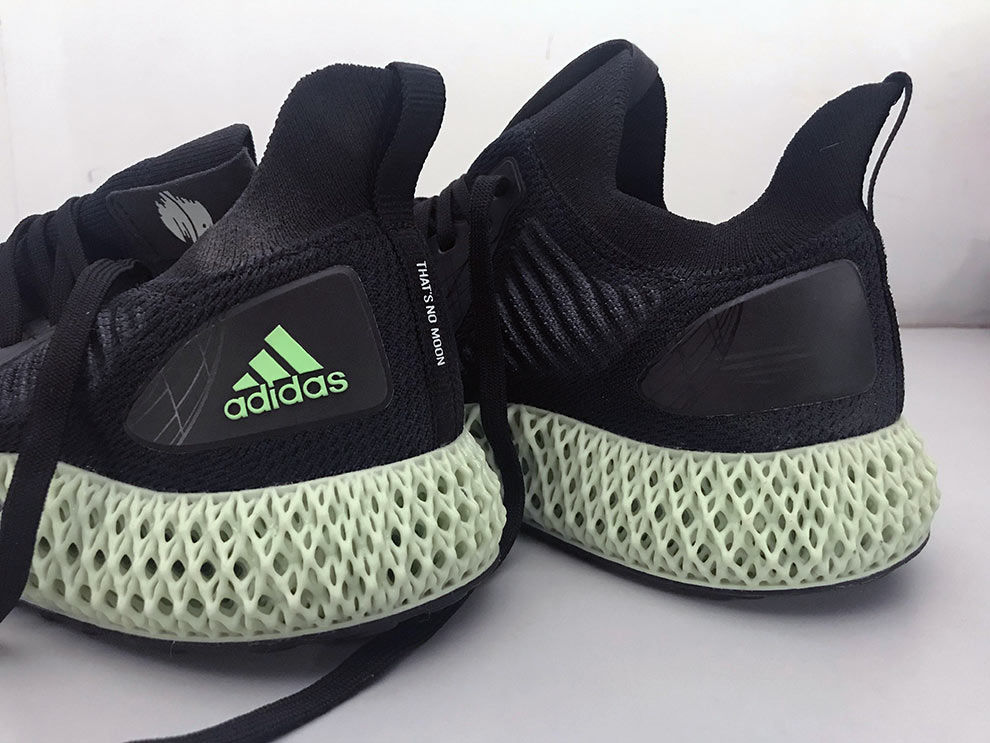 The upper uses Forgefiber, which is surprisingly flexible where it needs to be and hard at other places. The edges, and tops are flexible, but the sides are harder. The collar is firm but elastic, which means that you will feel no pressure on your ankles. No matter how you move your legs, the shoes will not bite into you. The shoes are close fitting, and there really is no distinct tongue. So, it can be a bit of a struggle to shove your feet into them, but they fit so naturally that you can forget that you have them on. adidas claims the Forgefiber tech provides a seamless second skin experience, and after spending a few hours using them, we agree with the claim. Despite the bulk, the shoes are surprisingly light. While coming off, they slip off easily enough.
Now, because of how flexible the upper is, you can really go overboard with tightening the laces. There are no structural limitations to how tightly you can make the shoes fit, it can get as close to your skin as you are comfortable with. The shoes can get warm over time though. The eyelets have an unconventional arrangement, which means that you have to tighten the laces successively as you go from the toes to the tongue. This actually means you get to granularly control exactly how tight these shoes are at every part of your feet.
Even if you do go overboard, and make the shoes too tight, you can only feel the pressure above the tarsals, which can actually take the extra duress for some time without feeling uncomfortable. The rest of the foot will not even feel like the shoes are too tight. Even at their tightest, these shoes are ridiculously comfortable. adidas gives you total control on how tightly or loosely you want to wear the shoes, which is great. The insides are soft and comfortable, and do not get scratchy even if you do not use socks. 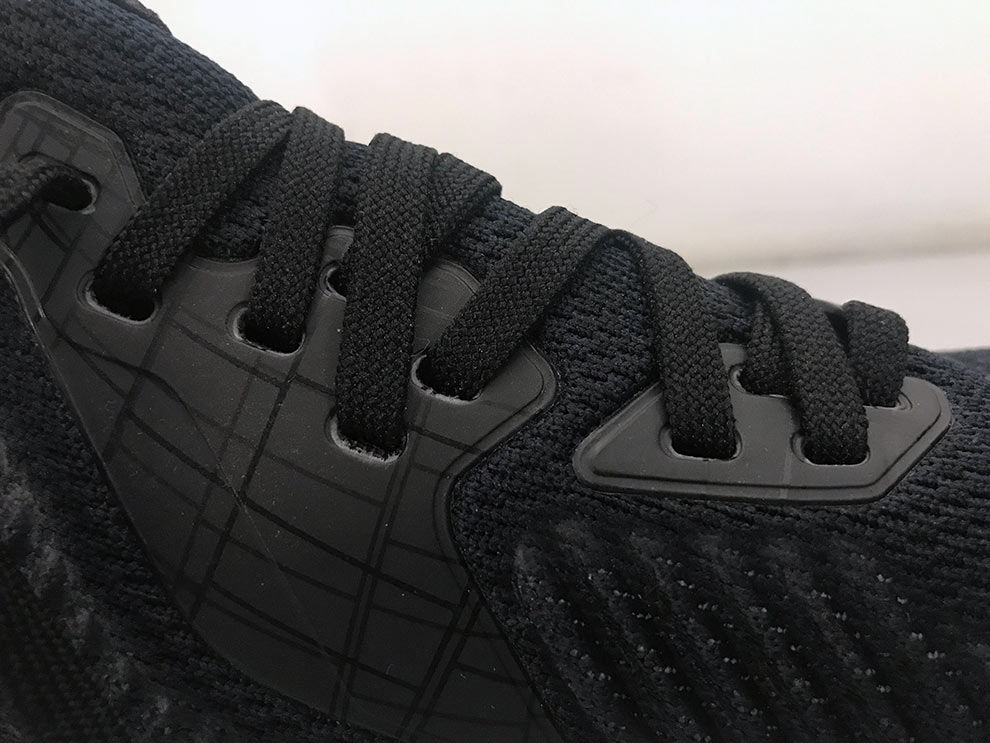 There are a whole bunch of tiny details that celebrate the dark side of the force in the original trilogy. There are slight variations in the left and right shoes. The left tongue has a Death Star logo, while the right one has both adidas and Star Wars branding. The left insole has the adidas and Star Wars branding, while the right insole has a stylised 4D logo. There are adidas logos on the outer sides of both heels. The left pull tab has half of Obi Wan Kenobi’s famous exclamation on seeing the Death Star, “that’s no moon” in A New Hope. The right pull tab just says “the power of the dark side”. One of the insignias acquired a scratch, but we wouldn’t consider that a big negative, and it just goes to show how hardy the shoes actually are. Both the shoelaces have charms with the insignia of the Galactic Empire. Adidas threw in a bonus as well, all of these elements glow in the dark. 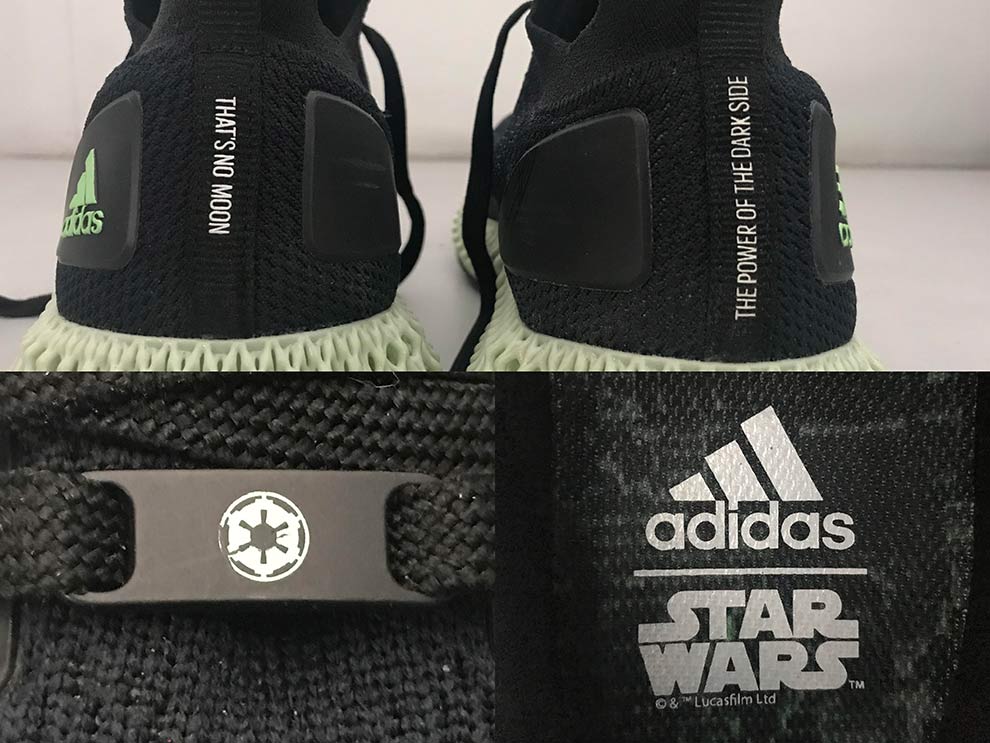 These shoes have a lot going for them. First there is the comfort, the shoes feel like a natural extension of your feet. Almost every part of the shoe uses cutting edge technology. The soles are from continental, the midsoles are 3D printed, and the uppers reduce weight and provide structure with innovative stitching. These are very futuristic shoes, and seems totally like something Technical Boy from American Gods would wear. The original trilogy branding means that no Star Wars fan can find a problem with it. In a lot of ways, these shoes manage to put a spring in every step.