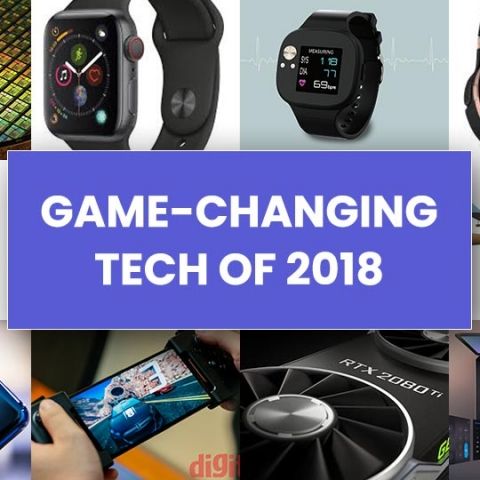 Part of what makes our job exciting is the front-row seat we get to witness the progress of technology. Throughout the year, technology giants like Samsung, Asus, Nvidia, and more showed off the best they have to offer. While most were simply incremental upgrades to their existing technology, there were some gadgets that really took us by surprise.

As reviewers, we get to play around with a lot of new tech and rarely do we come across devices that take our breath away. This list all about that

The Asus ROG Phone was proof that smartphones can be made exciting again. With a speed-binned Snapdragon 845 CPU, pressure-sensitive air triggers, a gamer-centric design that included a retroactive cooling fan and a host of accessories that took smartphone gaming to the next level, the Asus ROG phone was easily one of the biggest game-changing product we saw launch this year.

At a time when display notches were more and more annoying in smartphones, the Oppo Find X and the Vivo NEX were refreshing introductions that proved notches are not the only way to implement a bezel-less display. With mechanical sliders housing the camera, both the Vivo NEX and the Oppo Find X  were game-changers in smartphone design where most others simply ended up blatantly copying the iPhone.

How to make a laptop exciting again? Asus asked the question and answered it in the form of the ZenBook Pro 15. The 15-inch high-end laptop has a second display where the touchpad usually is. That doesn’t mean the touch-pad has gone anywhere. The secondary display is touchscreen-enabled that doubles up as a trackpad, while also displaying important information on it. Heck, you can even keep a movie playing on the second display while working on the large 15-inch primary panel. It can be considered as another take at the Apple MacBook Pro’s TouchBar, but something that’s far more exciting.

Smart wearables and smart watches have so far been positioned as a fitness coach and a notification counter, apart from the regular timekeeping activities they undertake. However, with the VivoWatch BP, Asus made the wearable a lot more indispensable by integrating a blood-pressure counter in it. The watch, apart from all the other fitness-centric features, can record both systolic and diastolic blood pressure of the person wearing it. You can argue that this is finally a genuine reason to buy a smartwatch in the first place.

Nvidia’s next-gen lineup of GPUs for PCs are notable for the fact that for the first time, a consumer-grade graphics card can do real-time ray tracing. That’s tracing the path of every single ray of light in an animation to create reflections and shadows with uncanny accuracy. Furthermore, the RTX 2080, apart from having dedicated cores for ray-tracing also has dedicated Tensor cores that can be used to perform on-device machine learning to improve video games and graphics-heavy applications.

Rarely do we see a piece of science fiction become actual, tangible reality. But MIT researchers managed to bring a piece of Star Trek fiction into reality. They created a 2.45 kg experimental aircraft that was able to propel itself 60 meters without any turbines or moving parts. If scaled up, this technology could result in planes with no fuel combustion emissions.

You can call it the audio equivalent of a VR headset, the Audeze Mobius is a headphone that has gyropscopes implementing Waves Nx 3D audio technology and head-tracking to make the audio more immersive. It has a 7.1 -channel soundstage and proved to be a big game-changer in PC
gaming audio.

The Apple Watch Series 4 became the first smartwatch to offer echocardiography that’s truly portable. If you go by several news reports, the new Apple Watch has also saved a few lives in the US. The watch not only notifies you if you are likely to have a heart attack, but also notifies authorities on its own if you happen to have an accident and become unconscious.

Smartphone photography in 2018 was bolstered thanks to large format image sensors like on the Huawei P20 Pro and the Mate 20 Pro. 40MP sensors allowed the phone camera to capture more details, overcoming the saturation point smartphone cameras had hit before this. The technology has only been leveraged by a few smartphones this year, but with the 48MP Sony IMX 586 announced for smartphones next year, large format image sensors will be big in 2019.

Nanotechnology has been rapidly progressing and while last year we saw the advent of 10nm chips in both PCs and mobiles, 7nm chips came in at the second half of 2018. Both Huawei’s Kirin 980 and Apple A12 Bionic leveraged 7nm manufacturing process, but even in that space, Samsung’s EUV lithography in 7nm is truly groundbreaking. It’s a significant milestone in semiconductor tech. Samsung started manufacturing 7nm LPP chips using extreme ultraviolet lithography that offers more precise cut by using a single mask. Experts believe EUV will throw open the doors to 5nm and even 3nm chips in the future.

Maker of iPhone in India, Wistron sees losses of Rs 437 crore and thousands of missing iPhones due to protest
Samsung unveils new range of TVs, monitor and soundbar at Unbox & Discover event
Qualcomm, Microsoft and Google oppose Nvidia's purchase of ARM Holdings
Apple Store Online to offer Rs 5,000 cashback on orders of Rs 44,900 and more from January 21 in India
WhatsApp has made a mockery out of our fundamental right to privacy, says petition filed in High Court
Advertisements