The massive 50 speakers roundup in the April 2010 issue of Digit had some clear winners in each of the categories that we tested. The speakers were all rated on their features, their performance in music and movie tests, and also things like build quality of the speakers. While the verdict is out (check out our latest issue to find out the winners), we also ran a few other tests for the winners just to see the characteristics of the speakers. 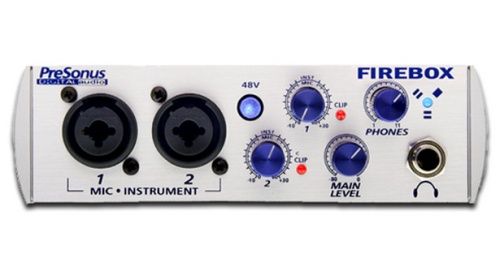 For this setup, we used a Presonus FireBox recorder with a zero response microphone for the test. We used a Java application called Room EQ Wizard (www.hometheatershack.com/roomeq/) which records frequency responses and plots graphs besides doing other a 100 other things. The microphone was placed a couple of feet away from the front speakers and woofer while setting all the speakers to 75 dB using a built-in pink noise sample. Ambient sound in the test centre was kept low with fans and air conditioners turned off. All the equaliser settings and effects on the speakers were turned off. This setup was left untouched throughout the tests. We used a frequency sweep sample beginning at a rumbling 20 Hz and going right up to a screeching 15 kHz. 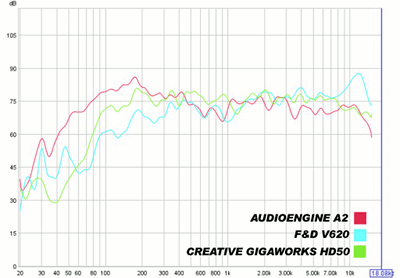 Audioengine A2 (Best performer in the category)

The first observation from the graphs is the lack of the low frequency range or bass as most people know it by. The missing subwoofer is clear. Still, the Audioengine A2 has a slight advantage over the rest in this region and it maintains a somewhat stable dB level across all frequencies except towards the 15kHz mark. The F&D V620 which was one of the smallest of all the speakers sound spiked at the high end of the spectrum. The Gigaworks HD50 from Creative was pretty good as well as well in the midrange (400Hz – 6kHz) like the rest but with a deep drop on the bass end. 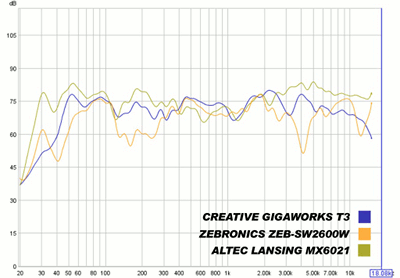 The graphs for the 2.1 speakers show a big improvement in the low frequency. The Altec Lansing’s MX6021 woofer kicks at a lower frequency than the rest. With the Zebronics speaker, there are two distinct gaps visible in the upper-lower frequency (around 200Hz). The second such gap is around the 4kHz mark. These are mostly because of the audio crossover meant to send signals to separate drivers on the satellites. 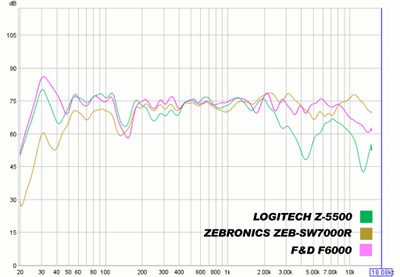 The audio test signals are stereo and the surround speakers would use only the forward channels for this. Overall, this category of products had a rather stable frequency response. A drop similar to the one seen in the 2.1 speaker category was visible in the switchover area from the woofer to the mid-range drivers. We’re talking about the gap between the 100 Hz and 200 Hz mark. The large woofers of the Logitech Z-5500 and the F&D F6000 are good are slightly over-the-top with the extreme low bass and the midrange of all the speakers are more or less the same across all the top speakers. The Logitech z-5500 has a surprisingly major drop in the extreme high-range frequency band. This is the range which gets pretty inaudible to the human ear.

The speakers we tested sounded great, they were powerful but it’s obvious from the graphs, they are nowhere close to perfect. There are abnormalities across the entire audio spectrum and all these do affect the way your music sounds in some way or the other. For a much flattered and even frequency response, one needs to look at monitor or reference speakers. For the most part, many of them do that but only in small patches – especially the mid range. The Audioengine A2 wins is in the mids and highs, but it fails at the lower end. It’s the other way around for the Z-5500.

For the complete test of all the other speakers and the score tables, check out the Digit April 2010 issue.