App of the Week: Brave Browser 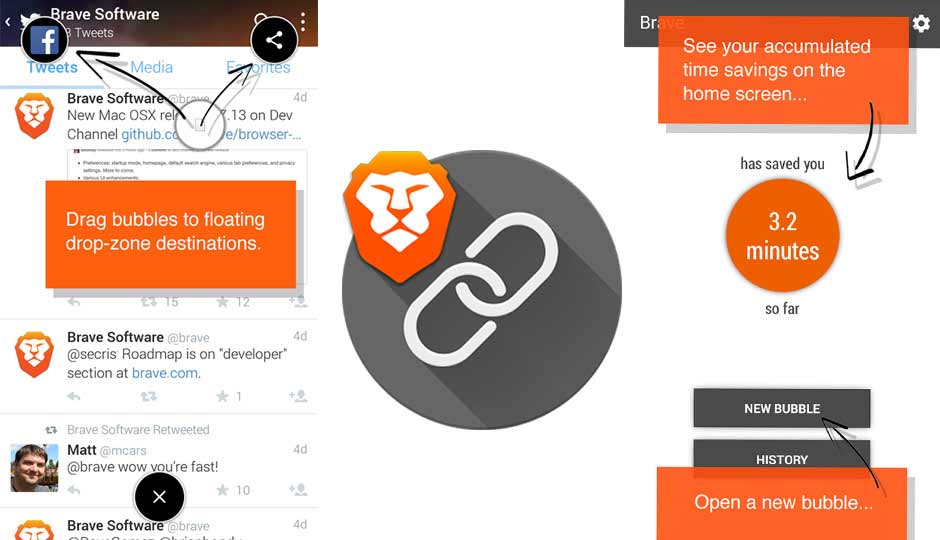 Coming across an ad-blocker extension in a web browser isn’t a surprise since few users enjoy ads on web pages. Ads are an important revenue medium for publications, ensuring them to continue running the website but visitors blocking these ads is detrimental to their future. Websites are always trying to improve the way ads are displayed so that they don’t interfere with user experience. Google wasn’t friendly with ad blocking apps in its Play Store and were only allowing browsers with in-built ad blocking functions to be published. But it seems that Google is rolling back on its decision and we might see more ad blockers flooding in soon. Nonetheless, the search for a better browser for mobile without ads led us to Brave.

Although, an in-built ad blocker is the highlighted feature in this app, the most useful feature is floating bubbles. Based on the Chromium project, Brave was formerly known as Link Bubble until it was acquired by Brendan Eich. If you aren’t familiar with this name, you should be, since he’s the creator of the JavaScript programming language and also co-founded the Mozilla project. After the acquisition, the app underwent a lot of updates and improvements and now includes ad blocking and tracking protection. 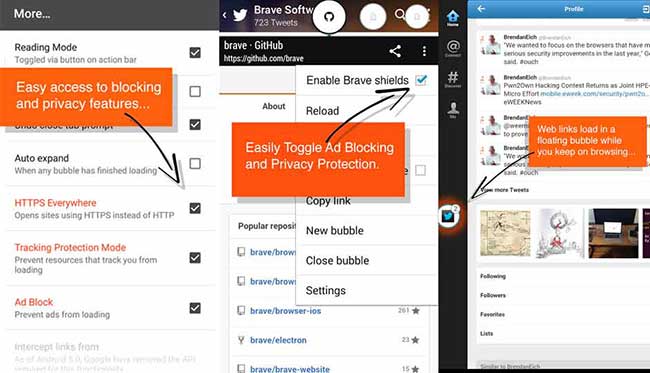 Brave works the same way as Facebook Messenger’s chat heads concept. For instance, if you’re scrolling across Facebook and tap on a web link, it pops open up the web page in a bubble. While the bubble loads the page, you can continue scrolling through Facebook. With this, you aren’t forced to leave the original app and several bubbles can be opened up along the way. The bubbles are able to load pages faster since it strips away normal ads and tracking. They have also integrated HTTPS Everywhere so that it redirects you to HTTPS sites only.

Brave isn’t trying to completely ban ads. Their motivation is to build a browser that doesn’t track users and interfere with the fluidity. “Our premise is that the Web requires ads for much of its funding, but not the poorly performing ads and trackers that drive users to ad-blockers. And we want to enable micropayments as an alternative, without requiring infrastructure changes from websites and publishers. Finally, we must protect Brave users from tracking and malvertisement”, stated in a post by Brendan on Brave’s website.

Brave is available on the App Store and Play Store while developer versions for Windows PC and Mac OS X can also be downloaded from their website.

Mozilla criticizes Google, Microsoft, and Apple for browser lock-ins: Here are the anti-competitive allegations raised by the Firefox-maker
New Microsoft Windows 11 security tool will frustrate password hackers
FB users sue Meta for tracking them on iOS devices via a workaround
YouTube 'dislike' and 'not interested' buttons fail to protect users: Mozilla study
Best iPhone lock screen widget apps for iPhone 14 and other iPhones on iOS 16 and above
Advertisements