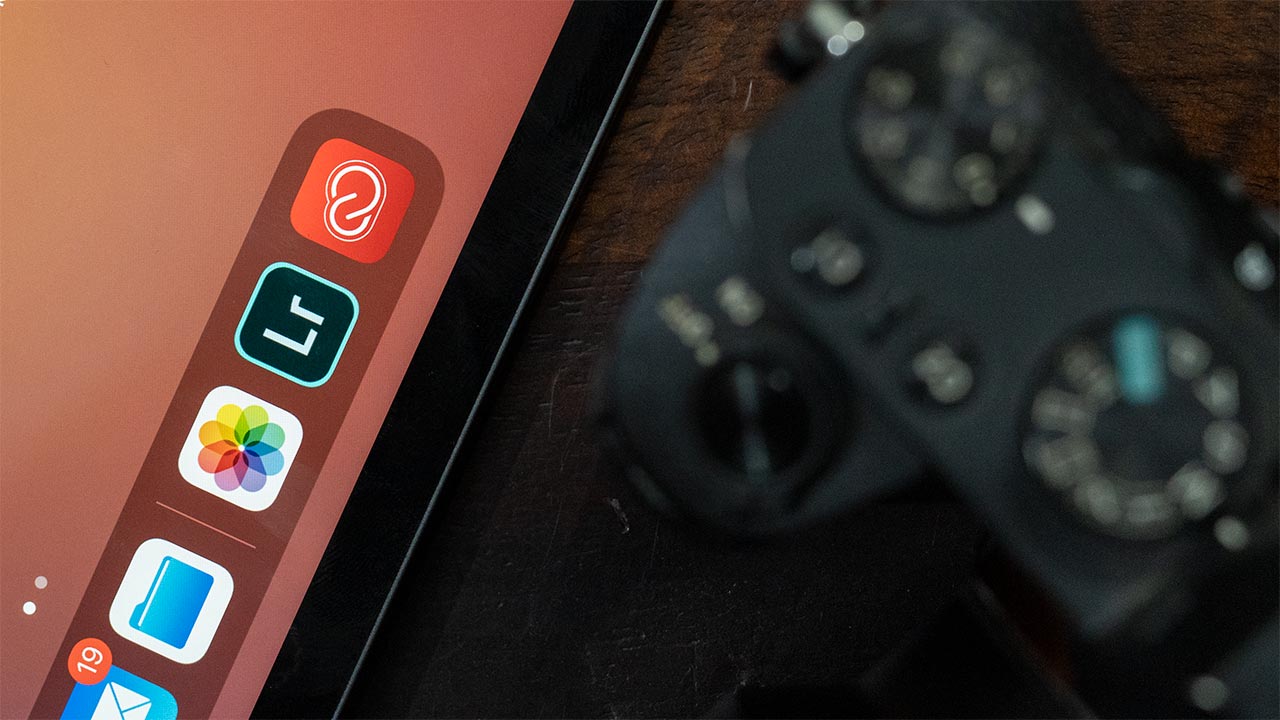 Adobe today has announced a slew of updates to its Lightroom Classic and Lightroom for iOS and iPadOS. While the updates to all three versions of Lightroom can be classified as important, perhaps the most notable is the update to the iPadOS version, which finally brings direct camera import to the app.

When Apple announced iPadOS earlier this year at WWDC, one of the biggest points of excitement was the support for external drives within in the OS. Additionally, creators were most excited about being able to plug their DSLRs directly to the iPad and import photos into Lightroom. While users have always been able to import photos directly from their cameras into the iPad, you could only do so by using the default Photos app. You would then have to import the photos from the Photos app into Lightroom, a process that made the workflow quite tedious. With iPadOS and iOS 13, users would have been able to import images directly from their cameras into Lightroom for iPad, but when iOS 13 did finally launch, the feature was strangely missing.

Turns out, while Apple did have to allow third-party apps access to this import feature, the actual implementation lay in the hands of the developers. Basically, it was up to Adobe to update Lightroom so that it could leverage this new ability provided by iPadOS. Adobe has taken 2 months, give or take a few days, to finally bring the functionality to iPad users.

Lightroom for the Apple iPad Pro

While Lightroom exists on all iOS devices, the iPad Pro is arguably the best suited to take advantage of all the features Lightroom has to offer. The biggest reason for this is the Type-C port on the iPad Pro, which allows for inter-operability between many external devices. You can simply plug in your camera using a cable that has a Type-C connector at one end (for the iPad) and a connector for the camera on the other. Additionally, the Apple Pencil makes it very easy to work the various adjustment sliders and even paint masks in images. Many iPad models support the Apple Pencil, but only the newest iPad Pro 10.5-inch and 12.9 inch models support the second generation Apple Pencil. The second generation of the Apple Pencil supports gestures and has a lower latency than its first generation counterpart, making it better suited for creators.

One of the best things about using Lightroom on the desktop for managing the photo-editing workflow is the ability to be precise on how the photos are imported from the camera. You can choose where Lightroom Classic copies the files, whether it renames them, and you can even choose to create a secondary copy on an alternate location. Unfortunately, you don’t have any of those options on the iOS/iPadOS, but when you do plug your camera into the iPad Pro, Lightroom will ask you if you’d like to import the images. The import dialog box will show all the images available on the card and you can select the images you’d like to import. Sadly, there is no way to determine a “save location.”  This is probably because iOS sandboxes all applications and their content. There is also no way to see where the files are saved or move them using the Files app, which is a bit of a let down. The import process is surprisingly straight-forward and we verified it to work with multiple cameras such as the Sony A7R IV, Sony A7 II, Canon G7X III and even a super old Canon EOS 40D. All you need to make the cables work is a Type-A to Type-C converter so that you can use it with any camera. 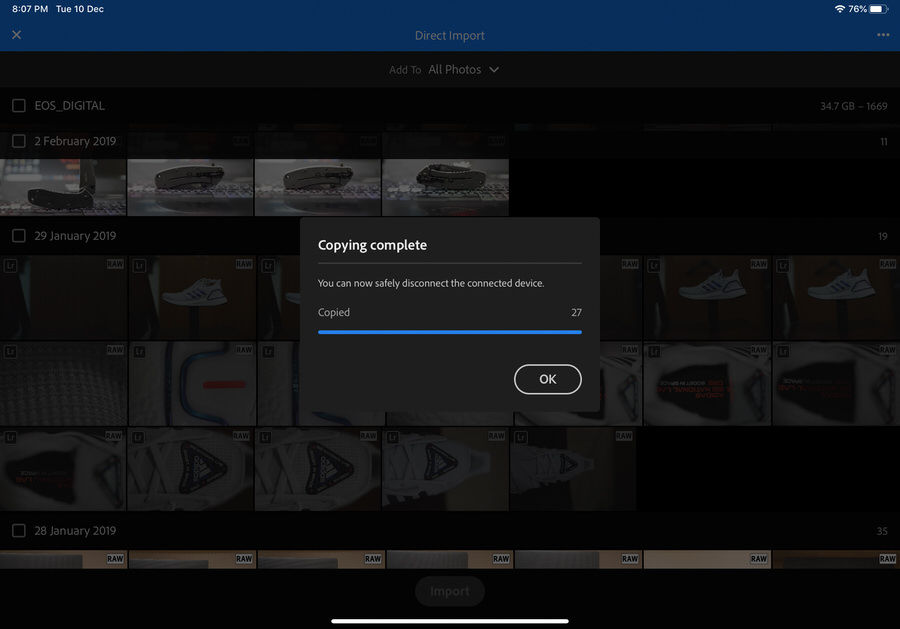 While the direct import feature is pretty big, what came as a surprise in this update is the batch export option. You can choose to export a single or multiple files in a host of formats, including JPG, TIFF, DNG and even the original RAW format. This last bit is a helpful way of getting the RAW files from within Lightroom’s contained file system and onto the cloud or even an external drive. However if you have a Creative Cloud subscription, you could just enable cloud sync so that your RAW files and corresponding edits can sync from the iPad to your workstation. 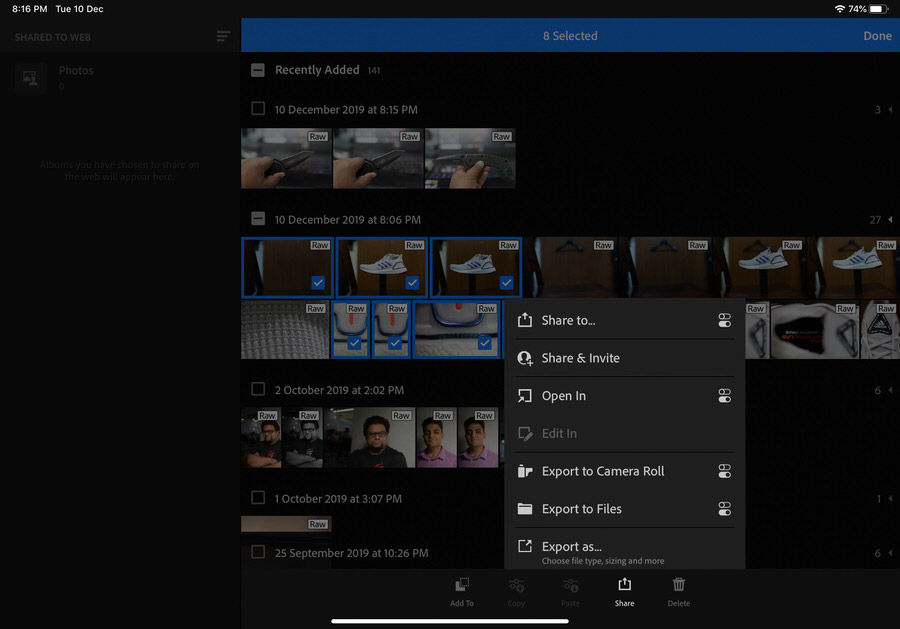 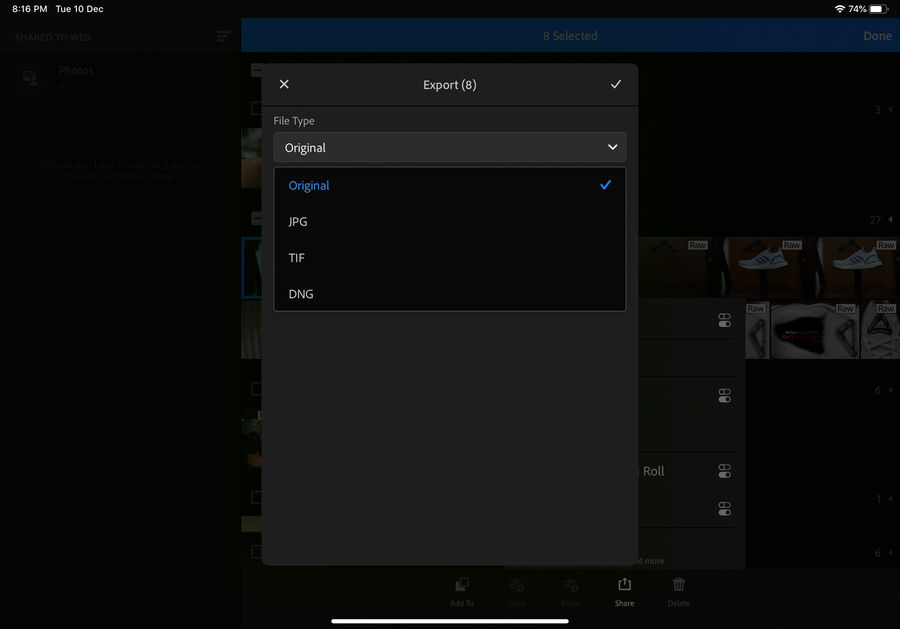 The new update to Lightroom for iOS/iPadOS is another huge step towards making the iPad Pro a staple device for creators. With Lightroom now being able to import photos directly from the camera, this eliminates the need for a laptop to import and edit, especially when you’re travelling. Not to mention, the iPad Pro 10.5 inch model we tested the new version of Lightroom on was easily able to handle the 60-megapixel RAW files from the Sony A7R IV with incredible ease. If you’re eager to test drive the new functionality, you can download Lightroom for iPad and iOS for free from the App Store. Do note that a Creative Cloud subscription is necessary to unlock all the features of Lightroom.