The Full HD LED TV will come equipped with 2GB of RAM, 16GB of onboard storage, HDMI ports and an MHL interface 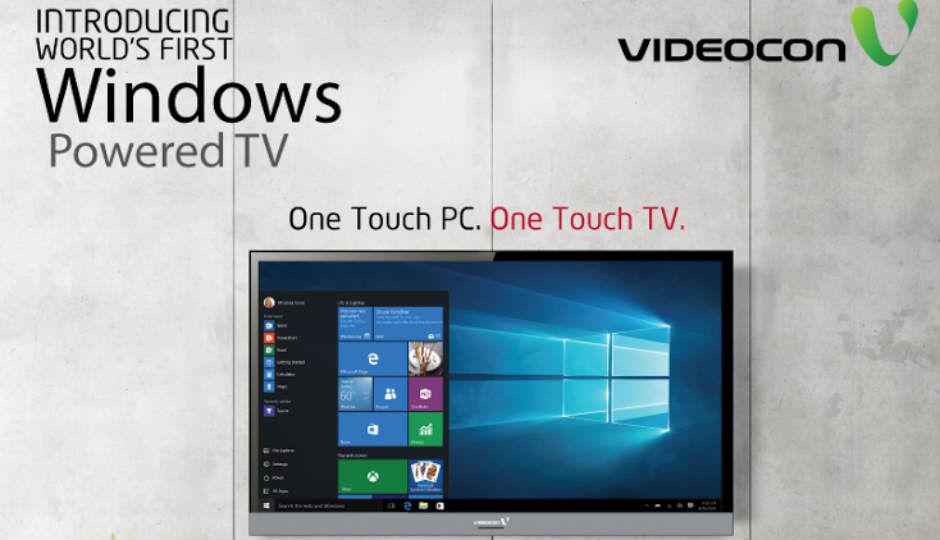 Videocon unveiled a Windows 10-powered Smart TV today. Made in collaboration with Microsoft, the LED TV will be available in 32-inch and 40-inch variants. It will hit stores next month.

The television has a 1080p Full HD display, and comes with 2GB of DDR3 RAM and 16GB of internal storage, that can be expanded upto 128GB via microSD cards. The device has built-in WiFi, and also features a Mobile High-Definition Link (MHL) interface, alongside HDMI ports. The MHL interface allows for smartphones and tablets to connect to the device. It will come pre-installed with Microsoft Office. Speaking at the launch, Akshay Dhoot, Head of Technology and Innovation, Videocon, said, "We are extremely thrilled to announce the launch of world's first Windows 10 powered TV. In these changing times, we realized the needs of our consumers of having easy access to technology at their convenience and, therefore, we designed world's first hybrid TV cum PC.”

The company has currently launched only the 32- and 40-inch variants of the television. Larger variants sized at 55 and 65 inches are also in the pipeline, which will be released on the basis of market feedback. A 24-inch version might also be released, before the end of this year. According to Dhoot, Videocon is expecting the Windows 10 Smart TVs to account for 5 percent of the total sales, and Android-based TVs to contribute 3 percent. The company will initially launch the product in 60 stores located in upmarket areas across the country. It will then be introduced in other places, in phases. While the 32-inch model has been priced at Rs. 39,990, the 40-inch version will cost Rs. 52,990.

Vineet Durani, Director of Windows Business Group, Microsoft India said, “With this innovative product, we intend to extend the Windows 10 experience to more users.” He stated that Microsoft is committed in helping its partners create innovative products and enter new categories, while delivering the best user experience at affordable costs. Durani also mentioned that Windows 10 has been received positively across the globe, with more than 110 million downloads already.