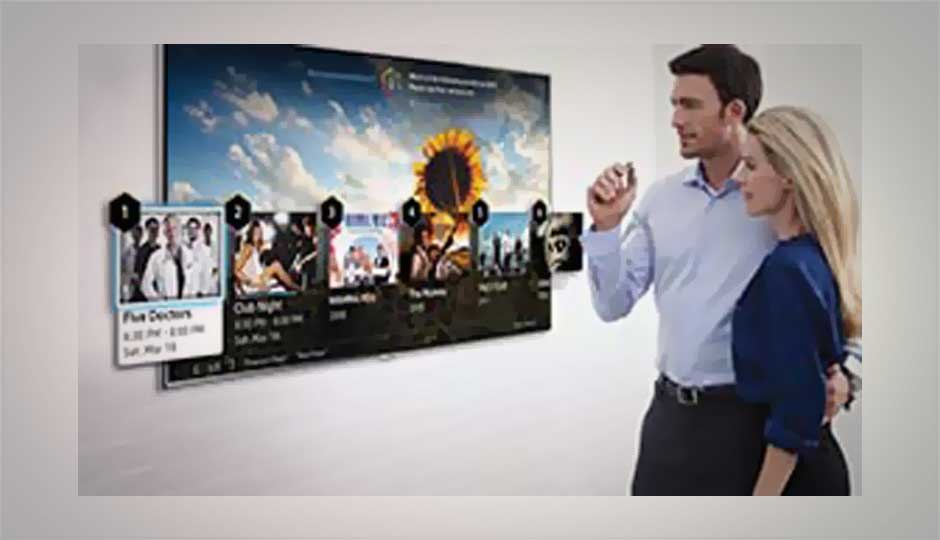 The new gesture control feature only requires the use of one finger. According to Samsung, users can now go through menus and channels just by pointing at the display and making certain movements. For now the only gesture Samsung has revealed is moving your finger in a counterclockwise motion will stop a video or scroll backwards through selections on the screen.

The smart TV's will also have an advanced voice command system so users can interact with the TV quickly. For e.g., users can now just say the channel number to switch to a new station, instead of saying change channel followed by channel number.

Samsung's current range of Smart TV's already feature voice commands in native languages of 11 different countries. The new range of 2014 Smart TV's will increase the number to 23 to reach a wider market. Moreover searching the internet with voice commands will cause a window showing their results to pop up on the bottom of the screen, so you can keep viewing videos at the same time. Samsung has not revealed the price or release date of its new range of Smart TV's and we will just have to wait till the CES in January to find out more.

Samsung and LG announced their 105 inch curved UHD TV's that will be revealed at the 2014 CES in January in Las Vegas. According to the company announcements both the TV's have 105-inch Curved HD screen, with 11 million pixel count and 21:9 aspect ratio. According to the company the Samsung 105-inch Curved UHD TV will have a ‘Quadmatic Picture Engine’ and will provide users with an immersive viewing experience.