Xiaomi India to launch Desh Ka Smartphone on November 30, will change the lives of the entire country says Manu Jain

The smartphone is expected to compete against low-cost devices such as the JioPhone, Micromax Bharat 1, Bharat 2 Ultra and the Karbonn A40 Indian, which are targeted at feature phone users Xiaomi India to launch Desh Ka Smartphone on November 30, will change the lives of the entire country says Manu Jain

Xiaomi's Manu Jain has been teasing an upcoming device which will “change the lives of the entire country, especially people living in rural India,” according to the company vice president and India MD. Today, Jain has once again teased the launch of Xiaomi’s “Desk ka Smartphone” on Twitter, which will most likely be a low-cost device competing against the likes of the JioPhone, Micromax Bharat and Bharat 2 Ultra and many others.

The company recently announced their first accessory manufacturing facility situated in Noida and also introduced the new Mi Power Bank 2i in the country. At the sidelines of the launch event and factory tour, we had a conversation with Jain where he told us that the new device will change the lives of people in India, especially those in rural India. Talking about the phone Jain said, “There’s something that we’re planning to launch, but I can’t share more details right now. This is something we would be able to share a few weeks from now, we are trying to explore something else which is going to be revolutionary. This is still work in progress just wait for a few more weeks.”

His tweet all but confirms that unlike the JioPhone, Xiaomi’s upcoming “new phone for Bharat” will be a smartphone and not a feature device. Another tweet by the Redmi India Twitter account says smartphone will be unveiled on November 30. Although the Redmi India account doesn't sport the verified blue tick, we have confirmed that the account is indeed official. 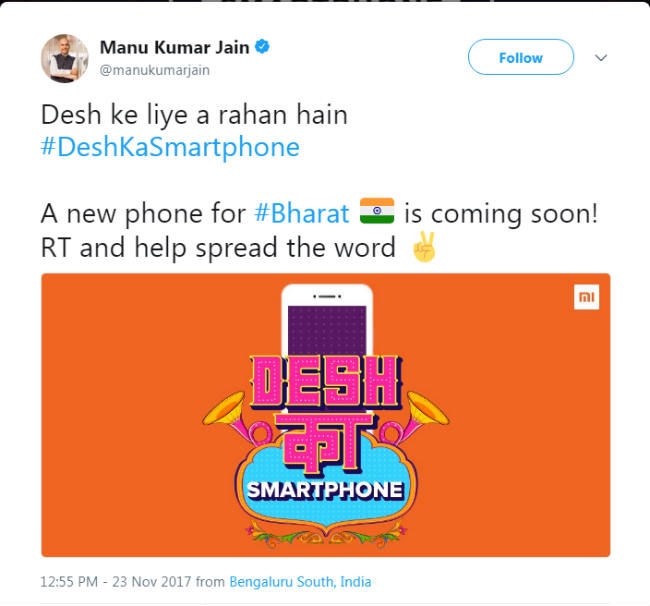 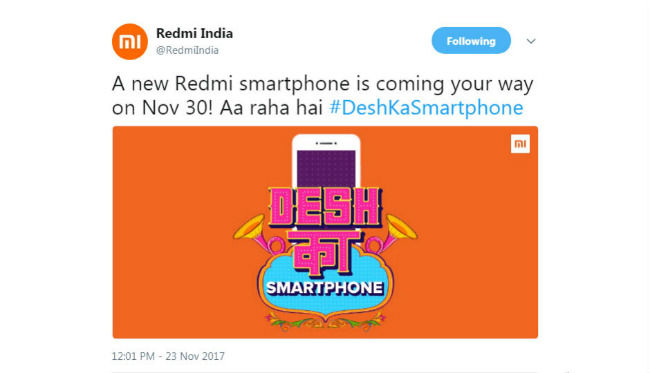 Many handset manufacturers such as Micromax, Karbonn and others have launched low-cost devices in partnership with major telecom operators aimed at converting feature phone users to smartphone users.

Xiaomi is making great strides in India's offline smartphone market, and Jain told Digit that the company has gained the number four spot in India's offline smartphone sales space in a short period of six months. The new "Desh Ka Smartphone" from Xiaomi is also expected to be made available offline, going with the company's current strategy. If the device is launched at an attractive price and bundled telecom plans, Xiaomi will surely get the boost it needs to speed ahead in the brick and mortar smartphone retail space.