Reliance JioPhone Versus Airtel Karbonn A40 Indian: Rs 1,500 smart feature phone goes up against Rs 1,399 smartphone in a spec and tariff comparison 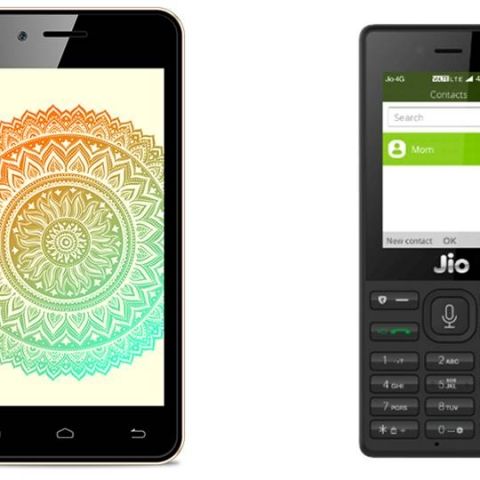 Bharti Airtel has announced plans to partner with various smartphone manufacturers to offer 4G smartphones bundled with data and calling services at the price of feature phones. As part of the initiative, Airtel has launched the Karbonn A40 Indian, an entry level 4G VoLTE handset aimed at first-time smartphone buyers. As it is obvious, the move is aimed to counter the popularity of the JioPhone, a 4G feature phone from Reliance Jio available at an effective price of Rs 0 and a refundable security deposit of Rs 1,500. So how do the two phones compare? Here is a quick look:

The major attraction here is the support for 4G LTE and all the three bands used in India. Both JioPhone and Karbonn A40 Indian support LTE Band 3, Band 5 and LTE-TDD Band 40 and will further push the adoption of 4G networks in the country. Jio has over 130 million subscribers on its 4G only network while Bharti Airtel reportedly has nearly 281.25 million subscribers. The Karbonn A40 Indian is also capable of supporting VoLTE networks, which Airtel is rolling out in a phased manner. The JioPhone also supports VoLTE, the only standard supported by Reliance Jio. A40 Indian, on the other hand, supports 2G and 3G networks as well.

The JioPhone is feature phone with smart functionalities like voice assistant and support for apps like JioCinema, JioMusic and JioTV. The Karbonn A40 Indian, on the other hand, is a true smartphone powered by Android 7.0 Nougat operating system. With Google certification, Karbonn A40 Indian supports over million apps available on Play Store. Most importantly, the JioPhone does not offer WhatsApp support, while the A40 Indian obviously does given that it supports a full-fledged Google Play Store.

The JioPhone is priced at Rs 1,500 with guaranteed refund of the entire amount after three years and on returning the device back to Reliance Jio. The Karbonn A40 Indian is priced at Rs 2,899 and offers a refund of Rs 1,500, bringing the effective price down to Rs 1,399. However, both JioPhone and Karbonn A40 Indian come with terms and conditions where users need to make minimum recharges to get the refund. While we will get to the minimum recharge requirements for both phones in just a bit, customers should note that the refund on the JioPhone will be given only incase of return, while the Airtel Karbonn A40 Indian does not need to be returned to get the Rs 1,500 cashback.

In the case of JioPhone, users need to recharge with minimum of Rs 1,500 per annum or Rs 4,500 over a period of 3 years in order to get eligible for a refund of Rs 1,500. If you buy a Karbonn A40 Indian, you needs to make a down payment of Rs 2,899 for the 4G smartphone and make 36 continuous monthly recharges of Rs 169 to avail the cash refund. Airtel says customers will get a cash refund of Rs 500 after 18 months and another Rs 1,000 after 36 months. On Airtel, customers need to make mandatory recharges worth Rs 3,000 within the first 18 months and another Rs 3,000 over the next 18 months to claim the refund. This can be done through any recharge plan, not neccessarily the Rs 169 plan recommended by Airtel.

With the JioPhone, customers will always remain locked into the Jio ecosystem, whereas the ownership of Karbonn A40 Indian remains with customers, and if the refund is not important for users, they can even switch to another network later on.