The excellent Galaxy S7 Edge camera is retained, along with a 5.7-inch dual-edge display. 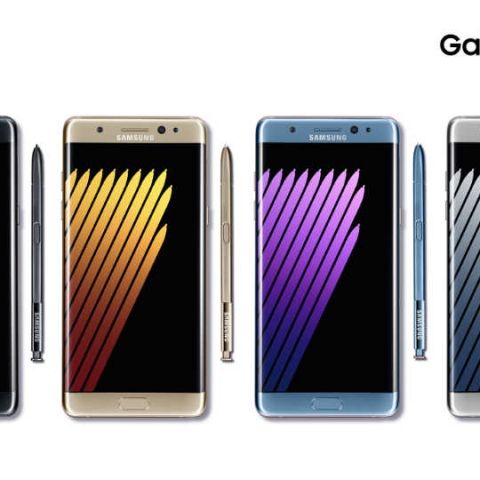 Samsung has announced the Galaxy Note 7 smartphone at Unpacked 2016 held yesterday. It retains the signature large display, and an all-new stylus to go with it. It is also the first Note smartphone from Samsung to offer IP68 certification, making it water- and dust-resistant. While the specifications of the phone are similar to the Galaxy S7, the Galaxy Note 7 features curved Gorilla Glass 5 glass, both on the front and back. The biggest addition to the phone is the new iris scanner, which adds an extra layer of security over the fingerprint scanner.

Just like the Samsung Galaxy S7, the Galaxy Note 7 will be powered by a Qualcomm Snapdragon 820 or an Exynos 8890 SoC, depending on where in the world you buy it from. We expect the Exynos variant of the Note 7 to launch in India. There is 4GB of RAM on the Note 7, with 64GB of base storage. This can be further expanded by up to 256GB via a microSD card.

The Galaxy Note 7 houses a 5.7-inch display on the new Note 7, with the dual-edge on display allowing Samsung to keep the form reasonably ergonomic. The Note 7 is 73.9mm wide, against the Galaxy Note 5’s 76.1mm width. Despite the larger, 3500mAh battery, Samsung has managed to keep the phone’s weight at 169 grams. The camera setup is identical to the Galaxy S7 lineup, with a 12MP Dual Pixel camera, f/1.7 aperture lens and optical stabilisation. A 5-megapixel front camera is included, which can also shoot in HDR mode.

Samsung plans to launch the Galaxy Note 7 across the world on August 19, so naturally, we expect to get our hands on it soon. Stay tuned for more details!