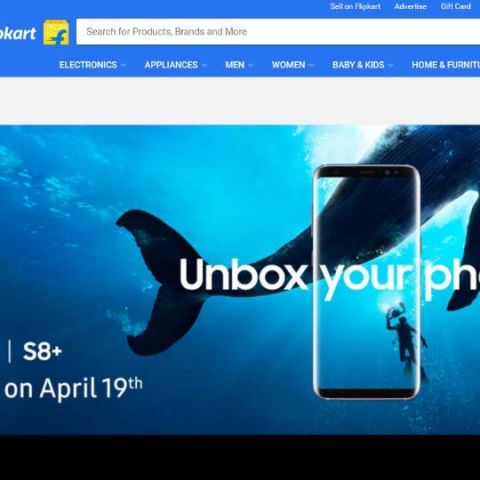 While LG is looking to launch the G6 in India soon, Samsung is all set to launch the Galaxy S8 and S8+ today. Flipkart already has a page up on the website teasing the two devices and reiterating the features they house. The two phones were previously announced last month during the Samsung unpacked event. Samsung has not yet revealed details about the price and availability of the two devices.

The main attribute of the Galaxy duo is the almost bezel-less design. Samsung is also using a newer resolution of 2960 x 1440p with a 2:1 aspect ratio on both the phones. The Galaxy S8 and S8+ now feature a 5.7-inch a and a 6.2-inch display respectively. Samsung calls it infinity display and to accommodate it, Samsung has also moved the fingerprint scanner to the back. To make the phones ergonomic Samsung has shaved off almost all the bezels, with slim bezels at top and bottom.

The distinctive physical home button has now been moved below the display and offers a haptic feedback when pressed. The Indian variant of the phone will be powered by an Exynos 8895 SoC along with 4GB of RAM. This combo is supposed to produce a similar performance as the phone’s US variant, which possess a Qualcomm Snapdragon 835 platform. On the storage front, all varaints will be equipped with 64GB internal storage and will offer support for micoSD cards.

The phones are IP68 certified making them dust and water resistant, just like the Galaxy S7 and S7 Edge. The rear camera hasn't been changed either, but Samsung claims that the 12MP rear camera is now better assisted by improved software. The front facing camera on the other hand got a slight bump in specs and is now an 8MP unit.

With the Galaxy S8 and S8+, Samsung is also introducing its new AI assistant called Bixby, which will take centrestage instead of Google’s Assistant and even comes with a dedicated physical button. Samsung is also using the iris scanner technology on the S8 Duo, which was previously introduced on the Galaxy Note 7.Buy Samsung Galaxy S8(₹ 23999 at amazon) from flipkart at Rs 57900.