Oppo to launch N3 and new devices on October 29 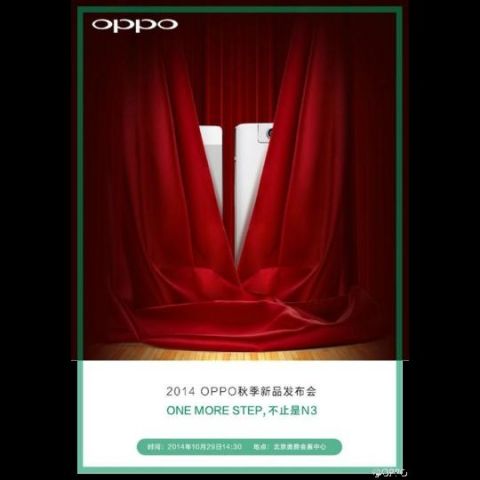 Oppo is expected to unveil its next flagship device, the Oppo N3 on Oct 29 in Singapore. The company has been posting teasers about the smartphone for a while and now Oppo's CEO has leaked camera images from the device on Chinese social site Weibo.

Oppo has been promoting its October 29th event on its Facebook page. The company is expected to launch Oppo N3, which is the successor to the Oppo N1 along with a mystery device. The latest teaser shows a mystery device standing beside the teased Oppo N3, with both phones hidden by a curtain. According to rumors the second device that will be launched on Oct 29th may be a mid-range version of the N3, but with a similar rotating camera. Oppo has not revealed the specifications or the name of the device as yet.

Last month, Oppo had launched the budget Oppo Neo3 for Rs 9,990. The device features a 4.7-inch IPS display with 854 x 480 pixels resolution. It has a 5 MP rear camera and 2 MP front camera for video calling. The device has 4GB of built-in storage, 3G, Wi-Fi, Bluetooth, GPS, USB-OTG connectivity and is backed by a 1900 mAh battery.