An image shared on the internet shows three phones that run on KaiOS, and among them is a device that resembles the Nokia N9 from yesteryears 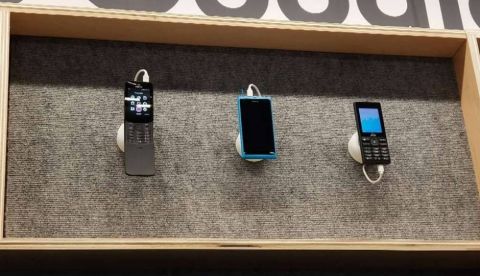 HMD Global has been striking the nostalgic side of customers around the globe by resurrecting old Nokia phones with new powers. After bringing back the Nokia 3310 in 2017 and the Nokia 8110 4G last year, the company is again looking to strike the chords of nostalgia by bringing back the Nokia N9. A hint of this development has been dropped by an image shared on KaiOS Technologies' Facebook page, apparently showing the alleged Nokia N9 among other KaiOS-powered phones.

In the image, three phones are seen and the middle one looks like a smartphone, which resembles the Nokia N9. Though Android is thought to be the natural choice for the company to power its phones, according to nokiapoweruser, HMD Global may relaunch the Nokia N9 with KaiOS and not Android. The reason could be that HMD Global may want to emulate the MeeGo-OS - the original OS the Nokia N9 ran.

For those who don’t know, the Nokia N9 was launched in 2011 with a 3.9-inch AMOLED Gorilla Glass capacitive multi-touch display with a resolution of 480x854 pixels. It was the first Nokia phone with a 1GHz processor, and 1GB RAM coupled with 16GB and 64GB of inbuilt storage. It sported an 8MP wide-angle autofocus camera with Carl Zeiss optics and dual-LED flash. It had a 1450 mAh battery, and as mentioned, it was powered by MeeGo OS.

While Nokia N9's relaunch is just speculation for now, a few phones are already running KaiOS. Offered by US-based company Kai Technologies, KaiOS has grown its presence in the Indian market through Reliance JioPhones. KaiOS originates from the Firefox OS open-source project started in 2011 and has continued independently from Mozilla since 2016. KaiOS was first launched publicly in the US market in 2017.

The OS is so popular that Google announced a $22 million Series A investment into the company. KaiOS is a web-based operating system that enables a new category of “smart” feature phones that require limited memory to offer a smartphone-like user experience - just like Google’s Android Go. Google and KaiOS have agreed to work together to develop services like Assistant, Maps, YouTube and Search, specifically for KaiOS.