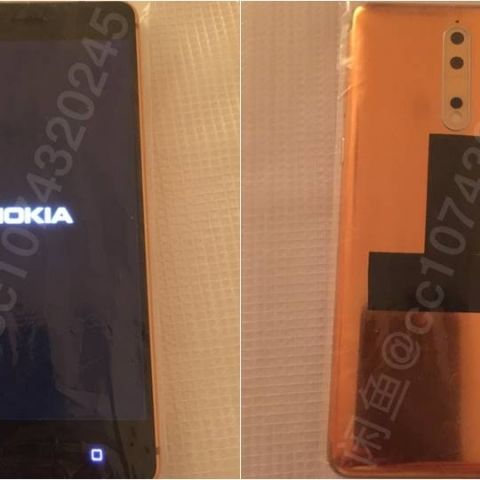 Nokia 8, the rumoured flagship Android smartphone from HMD Global has leaked once again in Copper Gold colour option. A new batch of images posted by ITHome reveals the Copper Gold colour variant of the alleged Nokia 8 with a dual rear camera setup.

The actual Copper Gold Nokia 8 smartphone could be shinier that the one depicted in the leaked images. The leaked images could belong to a prototype since it misses out on the Zeiss camera branding, which is expected to be featured on the final Nokia 8 units. The boot-up screen of the handset has also been shown, hinting at a functioning prototype with support for an iris scanning feature.

HMD Global has already sent out media invites for the August 16 event in London where it is expected to introduce the Nokia 8, an entry-level Nokia 2 and a 3G version of Nokia 3310. The flagship smartphone's design, specifications and pricing have also been detailed in the previous leak.

In terms of specifications, the Nokia 8 is expected to sport a 5.3-inch Quad HD display and use Qualcomm's Snapdragon 835 platform. The smartphone is said to launch with 64GB storage and options for either 4GB or 6GB RAM. It is also tipped to sport a dual 13MP rear camera system with Carl Zeiss optics and the handset has appeared on a few benchmarking apps confirming it will run Android 7.1.1 Nougat.

A Scandinavian retailer had recently listed the smartphone for a retail price of €589 (around Rs 44,500) and the new leak suggests the smartphone will retail for around $549 (around Rs 35,000) or $599 (around Rs 38,500). The Nokia 8 is expected to compete against the likes of Xiaomi's Mi 6 and the OnePlus 5 in terms of price and features.