As the release of the 2015 iteration of Nexus 5 draws near, a selfie posted on Google+ yesterday by an employee of Google’s Quality Assurance department indicates the presence of a 5-megapixel front shooter. The Exif data of the image also indicated that the device used was made by LG, codenamed "Bullhead".

The Exif data reveals the picture as being taken on 16th of July. It also mentions the image size as 1944x2592 pixels (5MP), along with an aperture of f/2.0, which will translate into better low light performance. It is going to be a major improvement over the previous Nexus 5, which only had a 1.3MP front camera. The image appears blurred to protect the identity of the employee. Coordinate data reveal the selfie to have been snapped at Google’s Mountain View complex. 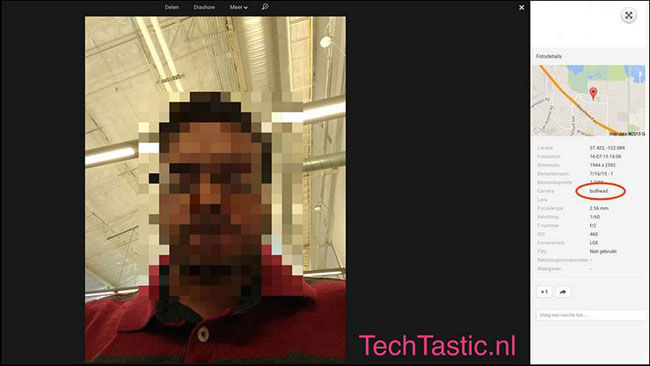 According to previous leaks, there will reportedly be two different versions of the Nexus 5’s 2015 version to be made by LG and Huawei. LG’s version is expected to have a more compact screen size of 5.2-inch with Full HD resolution, in contrast to Huawei’s version, which is expected to feature a larger form factor. Most sources indicate that LG’s phone is going to be powered by the Qualcomm Snapdragon 808 SoC and a 2700mAh battery.

Although Exif data can be faked quite easily, there are reasons to believe that yesterday’s leak was genuine. With LG’s 2014 edition of the Nexus 5 being codenamed “Hammerhead”, it is quite possible that the data revealed yesterday was not fake. In addition to featuring a 13-megapixel protruded rear camera with dual-LED flash, previous leaks also show the presence of a fingerprint scanner. The RAM is being expected to be bumped up to either 3GB or 4GB, and a USB C-type port is also expected to be present. Going by the trends of previous years, the phone should release sometime in October this year, possibly coinciding with the launch of Android M.

With Xiaomi speculated to launch the Mi 5 later this year and the OnePlus 2 already released, the 2015 edition of the Nexus 5 is going to face some tough competition.