Moto Z2 Play will be available this summer and features a 5.5-inch FHD along with Qualcomm's new Snapdragon 626 platform 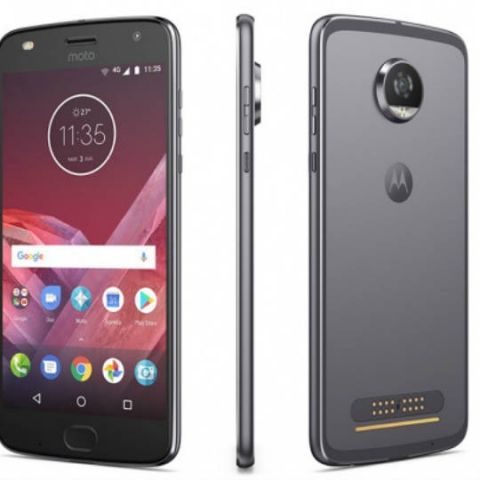 Moto has unveiled the successor to last year's modular Z Play smartphone. Called the Moto Z2 Play, the Z2 Play is priced at $499 (approximately Rs. 32,500) in the US. The device will be available from Verizon and Motorola's own website. In comparison to its predecessor, the new Moto Z2 Play offers improvements in terms of processor, memory and camera. The smartphone features a 5.5-inch AMOLED display with a resolution of 1920x1080 pixels. The new phone is also thinner at 5.99mm and lighter at 145 grams as compared to its predecessor. Powering the device is Qualcomm's Snapdragon 626 platform, coupled with an option for either 3GB or 4GB of RAM and 32GB or 64GB of inbuilt storage.

On the camera front, Moto Z2 Play uses a rear camera setup similar to the one used on the company's Moto G5 Plus smartphone, which was launched at MWC. The setup features a 12MP image sensor with f/1.7 aperture lens and dual-pixel autofocus. It also supports laser and phase detection autofocus, and 4K video recording at 30 frames per second. The Z2 Play a 5MP front camera with f/2.2 aperture, dual LED flash and 1080p video recording.

The new device runs Android Nougat v7.1.1 and includes new software features like Night Display mode to reduce blue light emission. It also includes a redesigned fingerprint sensor first seen on the G5 series, that also doubles as the Android navigation keys. In order to make the smartphone thinner, Motorola is making a tradeoff in the form of a smaller 3000mAh battery, which is rated to last 30 hours between charges. The original Z Play featured a larger 3510mAh battery.

Alongside the new Z2 Play, Motorola is also introducing four new MotoMods for its Z range of modular smartphones. The new mods include the JBL SoundBoost 2, the Moto TurboPower Pack and the Moto GamePad, all of which are priced at $79.99 each (approx. Rs. 5,100), and the Moto Style Shells with wireless charging priced at $39.99 (approx. Rs. 2,600). Motorola claims to have shipped millions of smartphones in its Z range of devices and is promising to launch at least a dozen new MotoMods this year.