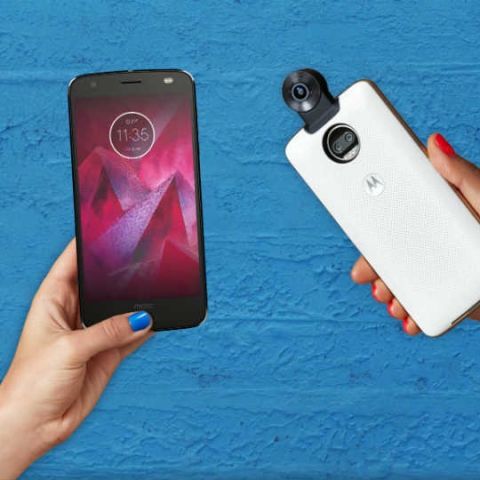 Lenovo-owned Motorola has finally announced the launch of its flagship Moto Z2 Force smartphone. As expected, the smartphone is thinner and lighter than its predecessor and offers a comparatively smaller battery. Motorola is calling the device as Moto Z2 Force Edition and it is the first smartphone from the company to sport a dual rear camera system.

The Moto Z2 Force Edition is the successor to last year's Moto Z Force and its biggest selling point continues to be the ShatterShield display technology. Motorola promises that the 5.5-inch Quad HD AMOLED display of the Moto Z2 Force will never crack or shatter like other smartphones. The handset uses reinforced 7000 series aluminium chassis for its build and houses a smaller 2730mAh battery as opposed to the 3500mAh one found on its predecessor.

Moto Z2 Force Edition is the second device after Z2 Play in Motorola's Z2 series, and it isn't clear whether Motorola plans to launch a regular Moto Z2 as well. Moto Z2 Force Edition's key specifications include the Qualcomm Snapdragon 835 platform coupled with 4GB or 6GB RAM and an option for either 64GB or 128GB storage. The US version of the device comes with 4GB RAM and 64GB expandable storage and will be available via all four major carriers.

In terms of connectivity, the Moto Z2 Force Edition supports dual-band Wi-Fi, Bluetooth 4.2 with an upgrade to 5.0 via OTA update, NFC, GPS and USB Type-C port. The handset misses out on the 3.5mm audio jack and runs Android 7.1.1 Nougat with Moto Actions support. The Moto Z2 Force Edition is priced at $750 (around Rs 48,500) and is now available for pre-order in the US. The handset is expected to launch in India in the coming months.

Alongside Moto Z2 Force Edition, Motorola has also announced the price for its Moto 360 Camera Mod. The Moto 360 Camera Mod will be available globally for $300 (around Rs 20,000) beginning August 10. The GamePad MotoMod with dual joysticks, a D-Pad, trigger buttons, a dedicated USB-C and a 3.5mm audio jack will also become available in the next few weeks.