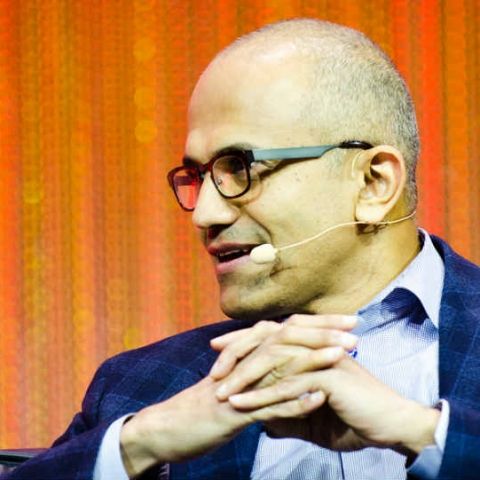 Satya Nadella used an iPhone to demo the Outlook app while delivering a keynote at Dreamforce, saying, "It's not my phone, but it's an iPhone."

Microsoft CEO Satya Nadella used an iPhone, calling it the “iPhone Pro”, to do a demo at Salesforce’s Dreamforce Conference at San Francisco, on Wednesday. He delivered a keynote address, before demonstrating the Outlook app on an iPhone.

Microsoft has been positioning itself primarily as a devices and services company for a while now. The change in stance became more evident, when Satya Nadella used an Apple device to showcase a Microsoft product. "I'm going to first start on this iPhone - and, it's not my phone, but it is an iPhone," said Nadella. In an obvious reference to the recently-launched iPad Pro, he continued, "It's a pretty unique iPhone. In fact, I'd like to call it the 'iPhone Pro', because it has got all of Microsoft's software and applications on it." Nadella used the Outlook app to showcase its ability to access information from third party applications and work with them on the Outlook platform. "Outlook is, of course, an email client, but here is the fascinating thing - it's the best email client on iOS for Gmail and Exchange."

Since taking charge of Microsoft, Nadella has taken steps to create a “new" Microsoft. It had gradually moved away from being a software vendor to moulding itself as a “devices and services” company. "The board is committed to the effective transformation of Microsoft to a successful devices and services company," one of the company's board members had earlier said. Even when Windows 10 was released, the company had repeatedly mentioned the fact that it was a “service”. It had also said that Windows 10 will be the final version of the OS.

The changing paradigms of the industry and the rise of Google and Facebook had forced Microsoft to rethink its business strategies. Microsoft’s CEO using an Apple product was an unthinkable proposition a few years ago, but is now proof of a more tolerant and welcoming culture that Nadella has been working hard to create at Microsoft.